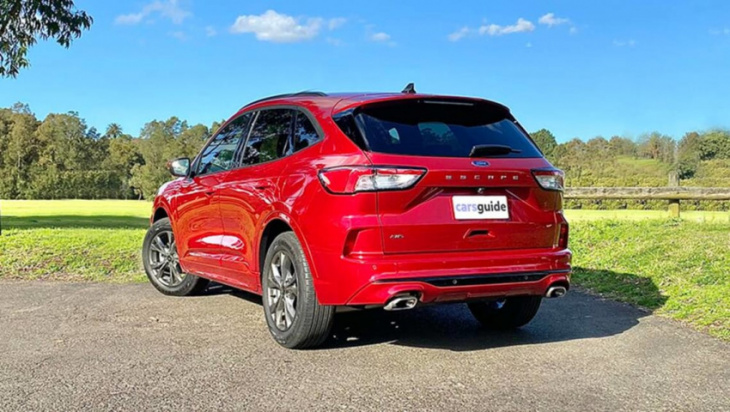 Two months in and the Berry family has decided whether or not the Ford Escape ST-Line is a keeper. (Image: Richard Berry)

Two months. That’s how long I’ve been testing the Ford Escape ST-Line. And like any relationship it’s around this time you know for sure if they’re a great match for you or not.

Okay, that’s not always the case. I’ve had plenty of relationships where I didn’t see the warning signs. I’m oversharing again.

Anyway, back to the car. Could my family live happily ever after with the Escape ST-Line? Yes, we could. Just.

The interior is spacious enough for their two car seats – one of which is rearward facing and fits behind my driving position… just. And the boot fits the pram and the supermarket shopping… just.

And another ‘just’ relates to fuel consumption, because the cost is verging on too high with current fuel prices.

Ford says the official fuel consumption figure for the Escape ST-Line AWD I’m testing is 8.6L/100km, but that’s based on a combination of open and urban roads.

If you think my findings are overly high, well, the Mitsubishi Outlander I tested long-term was also using about 15L/100km, on the same roads, doing the same things. 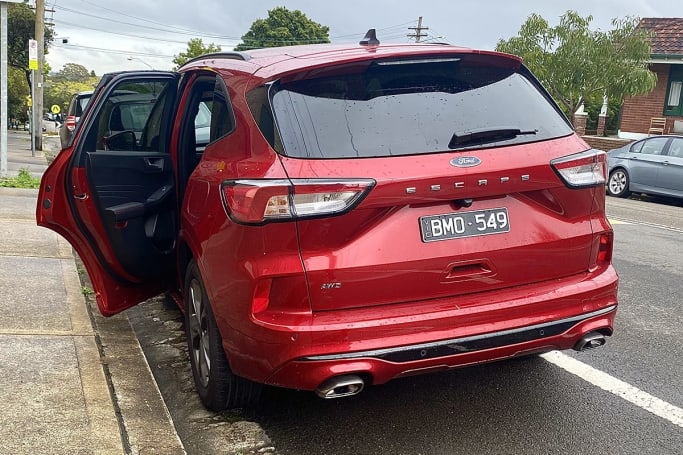 The Ford Escape is a sporty SUV with great handling and agility. (Image: Richard Berry)

The high fuel consumption is pretty easy to explain. I do mainly short, city trips, which uses a lot of fuel. The car is also loaded up with a pram, child seats and the mountain of gear which goes with kids, and that causes the car to use more fuel.

All-wheel drive SUVs tend to be thirstier than their FWD counterparts because they’re heavier and at times the drive is going to all four wheels.

That kind of use needs lots of fuel and it can be expensive with a full tank (57 litres) costing about $125 if you use 95 RON premium unleaded.

The maximum distance I’ve been able to get out of a tank with this kind of driving this month is 365.6km. Then, after filling it I drove another 299.8km to almost empty.

The plug-in hybrid version of the Escape ST-Line is much more fuel efficient than my petrol all-wheel drive ST-Line, but it’s also $11,950 more at $54,440, before on-road costs.

Those petrol bills aren’t high enough to justify spending the $12K for the hybrid, but they might make us consider a Toyota RAV4 hybrid instead, for $43,450. 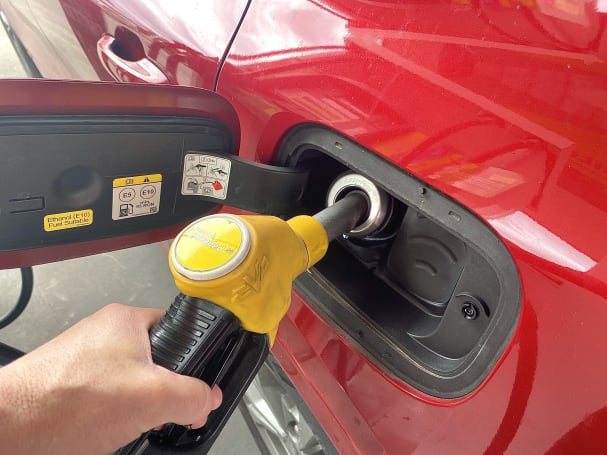 It can be expensive with a full tank (57 litres) if you use 95 RON premium unleaded. (Image: Richard Berry)

At the same time, if you only focused on the Escape ST-Line’s not-so-good sides, you’d miss what it does so well, and in many cases better than its rivals.

The Escape ST-Line’s best attribute (apart from its good looks) is how it drives. This is not just an easy car to pilot, with light steering, a good feeling brake pedal and excellent visibility. It’s a sporty SUV with great handling and agility for something in this segment. The ride comfort is also exceptional.

Those fun-and-easy-to-drive factors make a huge difference day in and day out. So, after two months I still look forward to driving the Escape even if it’s just a school run.

I’ve tested nearly every mid-sized SUV on the market in the past 12 months, from the Toyota RAV4 and Subaru Forester, to the Mitsubishi Outlander, and I think the Ford Escape is the best of the lot to drive.

Interior comfort is another great attribute, with padded surfaces and stitching everywhere enhancing a high quality look and feel throughout.

Cabin tech is also exceptionally good. Sure, the 8.0-inch display screen is small, but the speed at which this media system processes tasks is impressive. 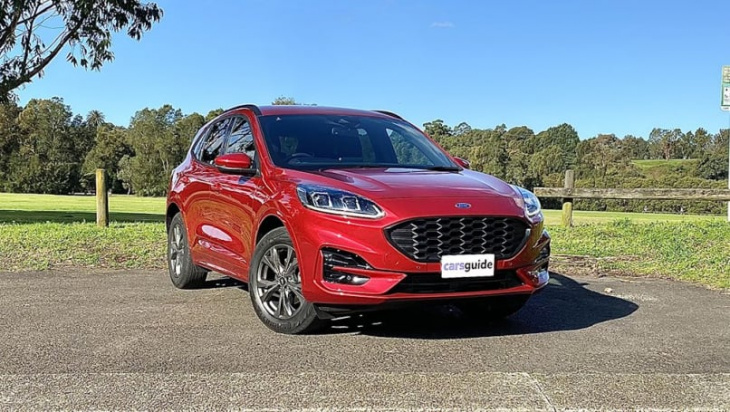 The Escape ST-Line’s best attribute (apart from its good looks) is how it drives. (Image: Richard Berry)

It’s Ford’s ‘SYNC 3’ media system and phone calls, music streaming, and navigation are all handled quickly.  I just don’t like the way the volume setting and blower speed for the climate control take over the entire screen when they’re being adjusted.

Long-term tests uncover truths that aren’t immediately apparent in a shorter test, and I’ve discovered the cargo cover in the boot isn’t as clever as I first thought.

It’s made of a flexible mesh material, designed to stretch over your cargo, which it does, but the way it’s attached to the tailgate with a series of cables means our pram’s wheels are constantly getting tangled up in them.

So, two months in and I can confidently say the Escape ST-Line is a keeper, even if its thirsty and not overly roomy.

Average fuel consumption this month: 15.4L/100km (measured at the pump)