Ford Electric Supervan Spied Lapping The Nurburgring With A Mustang

What could the high-powered EV be doing there? 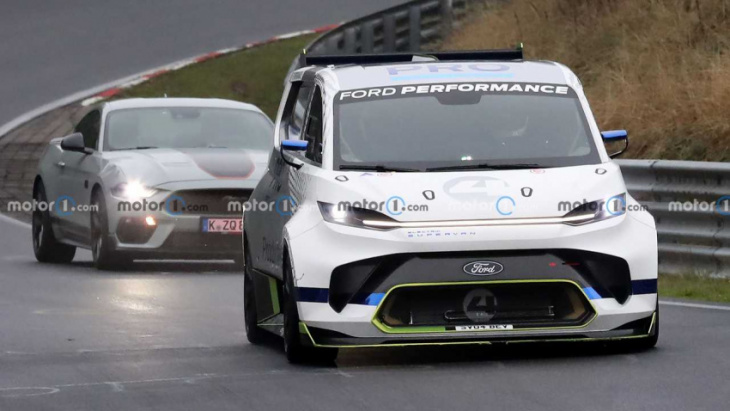 The Ford Electric SuperVan debuted at the Goodwood Festival of Speed packing 1,973 horsepower (1,471 kilowatts). The Blue Oval now has the unique machine at the Nürburgring. What the one-off EV is doing on the track is a mystery at this moment, though.

Ford makes no effort to hide this is the Electric SuperVan. The vehicle’s name is even on the nose, tail, and lower sides of the body. The rig uses an E-Transit Custom as a starting point. After the extensive amount of work, there’s very little resemblance between them. The overhauled body includes a front splitter and a large inlet in the fascia with a cooler visible behind it.

The designers sculpt the upper sides of the van so that open portions direct air past a vertical fin. There’s also a wing on the roof and a diffuser beneath the bumper.

Our first thought is that maybe Ford is preparing the Electric SuperVan to set a fast time around the Nordschleife. However, several of the pictures show the vehicle on the track in what looks to be heavy rain. Tuning the vehicle for a quick lap on a wet course wouldn’t make much sense because the data wouldn’t apply to pristine conditions.

The Electric SuperVan has four electric motors. The liquid-cooled battery has a capacity of 50-kilowatt hours. With nearly 2,000 hp, the vehicle accelerates to 62 miles per hour (100 kilometers per hour) in less than two seconds.

The tweaks under the van’s skin include a double-wishbone suspension layout at each corner. The brakes are racing-spec parts.

The interior is stripped out and now just has a racing seat, roll cage, a simple instrument display, and a large, tablet-like infotainment screen. The driver can select between modes like Road, Track, Drag, Drift, and Rally. There’s also a Tire Cleaning setting that locks one axle and spins the other. The result is a smoky burnout and warmer rubber.

At Goodwood, the Electric SuperVan was the fifth fastest vehicle in this year’s hill climb. It recorded a time of 46.58 seconds, which was just a fraction slower than the fourth-place Subaru GL Family Huckster’s 46.20 seconds. The fastest car in 2022 was the McMurtry Speirling’s 39.08 seconds.

If you want to hear more about the Electric Supervan and this year’s Goodwood Festival of Speed, check out this episode of the Rambling About Cars podcast: