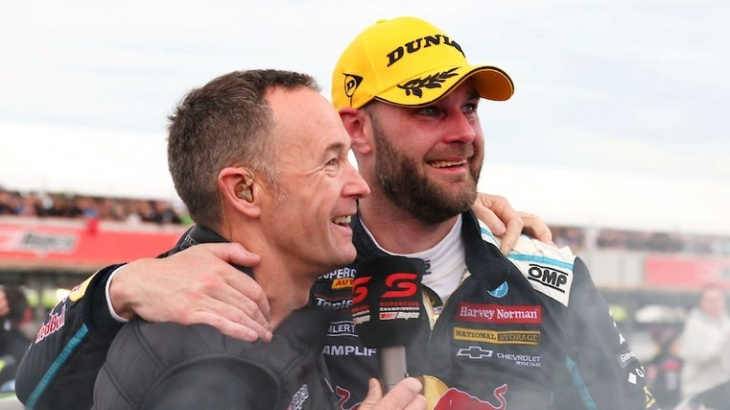 The Kiwi’s career achievements have included taking out the Bathurst 1000 and New Zealand Grand Prix, as well being a two-time Supercars champion.

However, victory at Pukekohe also meant he got to lift the Jason Richards Memorial Trophy for the third time.

The 33-year-old says: “To me that was better than Bathurst. It’s pretty cool, the way we did it and to see how much it meant to everyone. Having Jason’s parents there was very cool.”

Van Gisbergen, pictured above with Greg Murphy, won Sunday’s final race after starting eighth on the grid. He was also victorious in the first race of the day.

He needed to get past Cameron Waters with three laps to go in that second race. “I guess when I was in the car I felt good and, especially in that last race, seeing the crowd and response when I passed someone and even when I was side by side with Cam and didn’t get him. I could see them going wild. Then when I passed Cam into the hairpin on the next lap, they were going nuts.”

Andre Heimgartner finished third for his second podium of the weekend, showing the New Zealander is emerging as a force in Supercars.

“I didn’t get too emotional until the last race when they were doing the haka,” says Heimgartner. “Then you start thinking about it and fight back the tears. It was an emotional day and I was glad Shane got it in the end. No offence to Cam, but I was cheering for Shane.”

With 10 laps to go, the order was Waters, Heimgartner and Van Gisbergen, but the veteran Kiwi soon got past his younger compatriot.

When Waters locked up on lap 35 coming out of the hairpin, he only just managed to stay in front. A lap later at the same spot, Van Gisbergen led for 200 metres, but Waters – the two are pictured in action below – then had him on the criss-cross.

However, with three laps left Van Gisbergen got in front and then managed to block Waters. From there he was never going to be overtaken. The crowd was already celebrating before he went past the chequered flag. 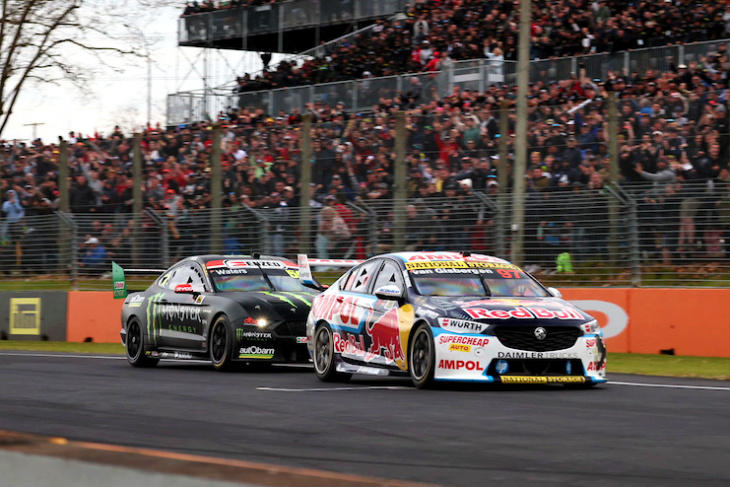