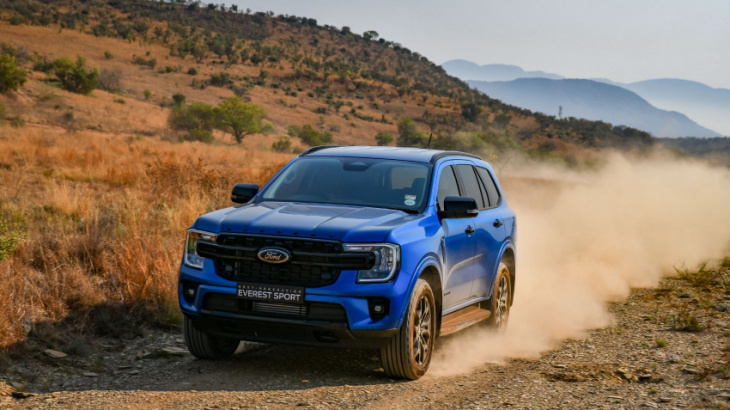 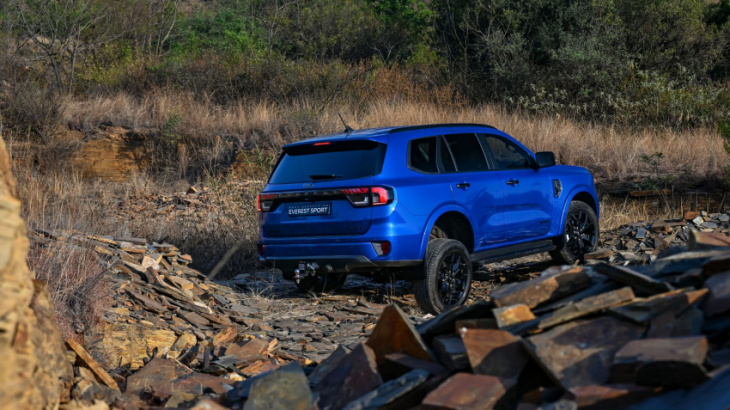 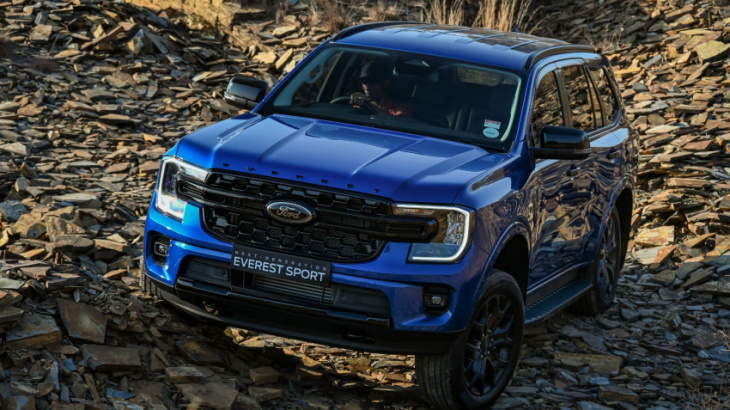 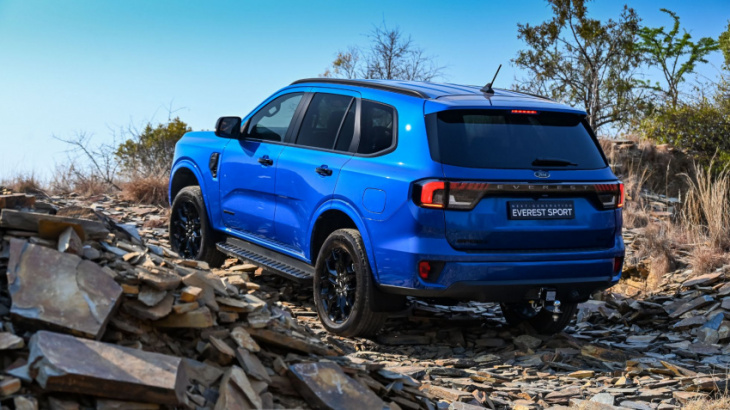 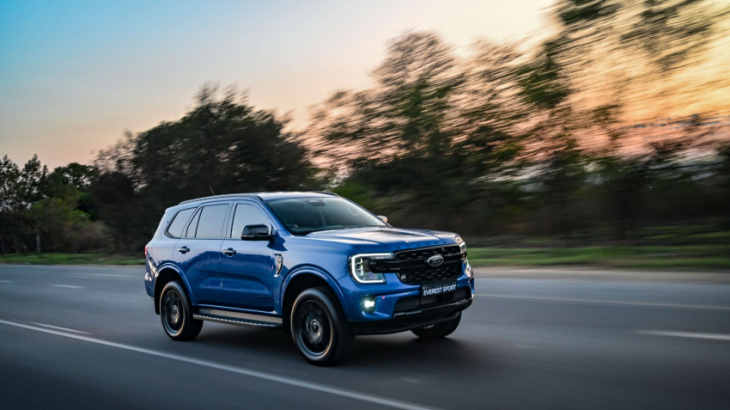 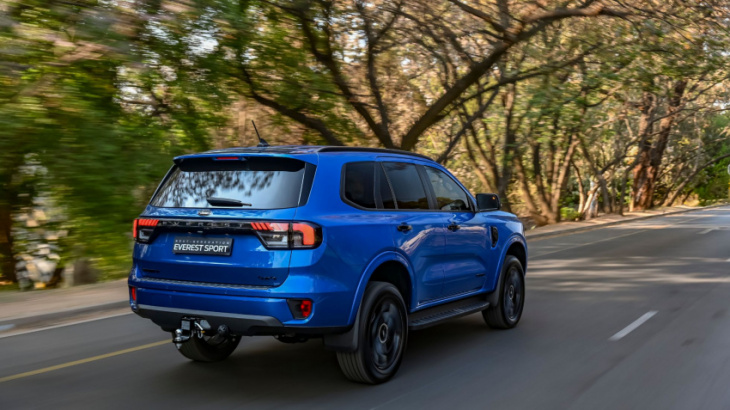 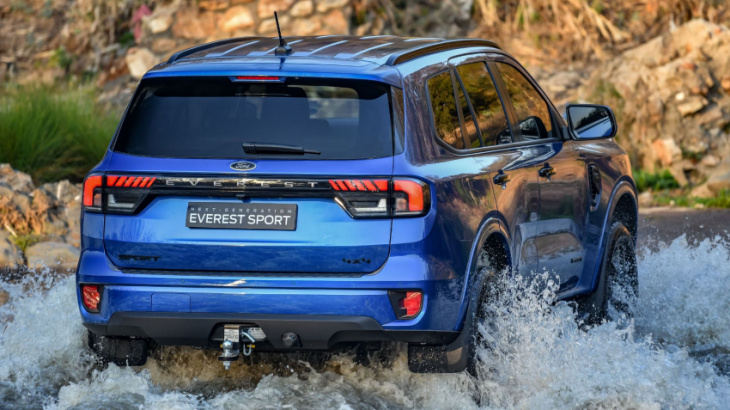 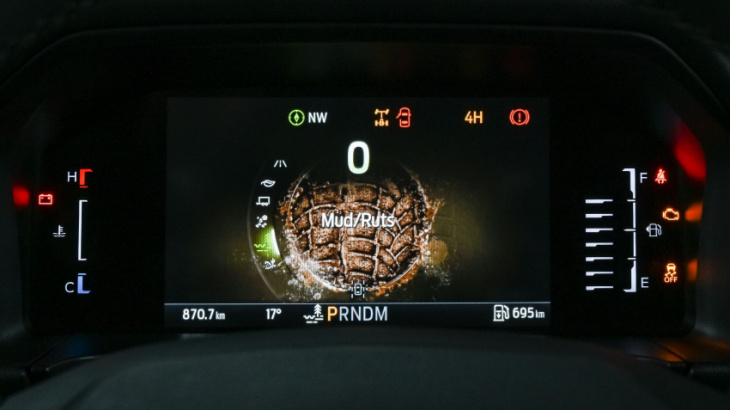 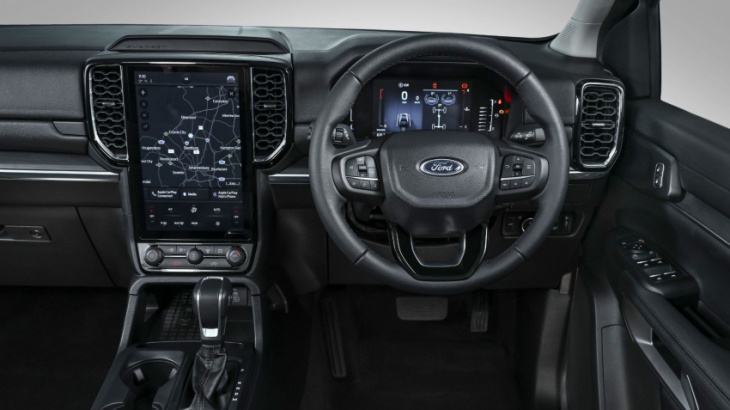 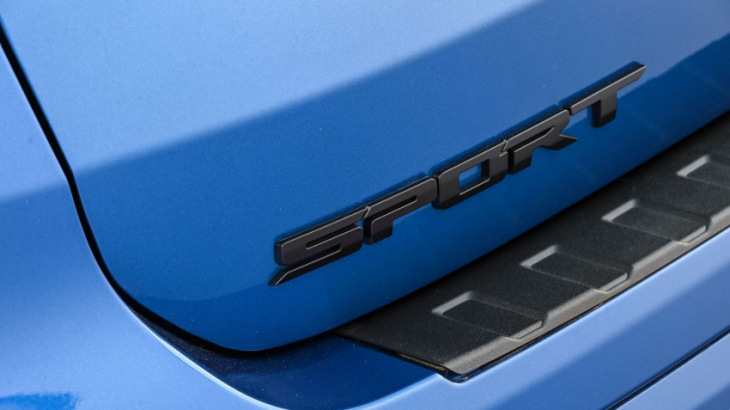 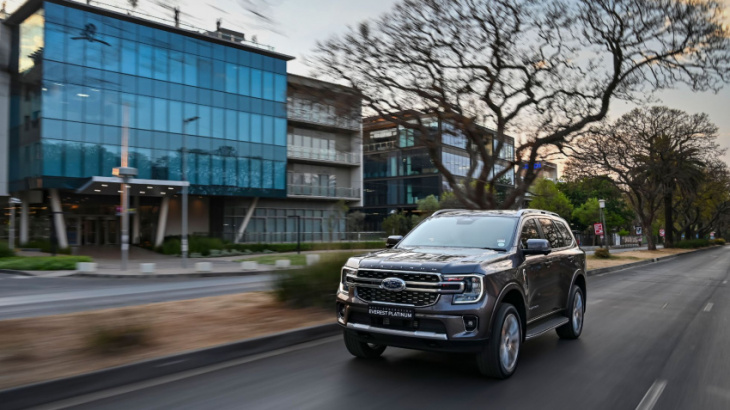 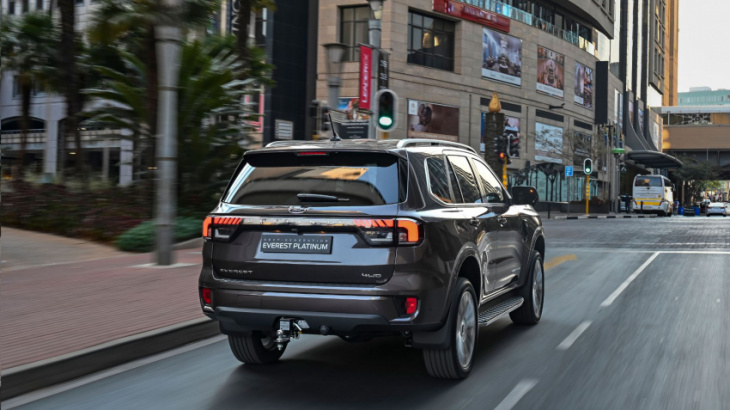 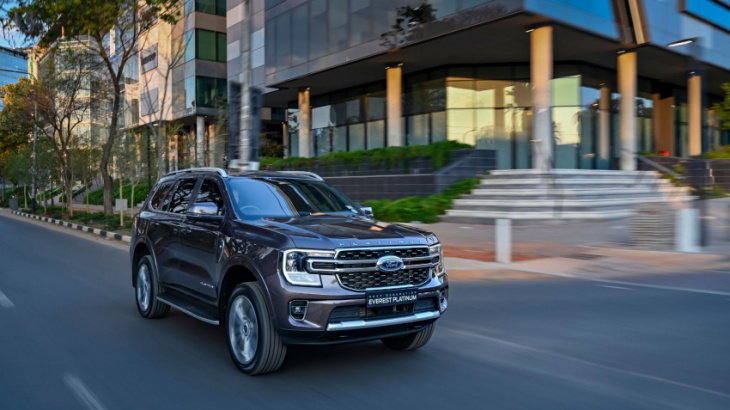 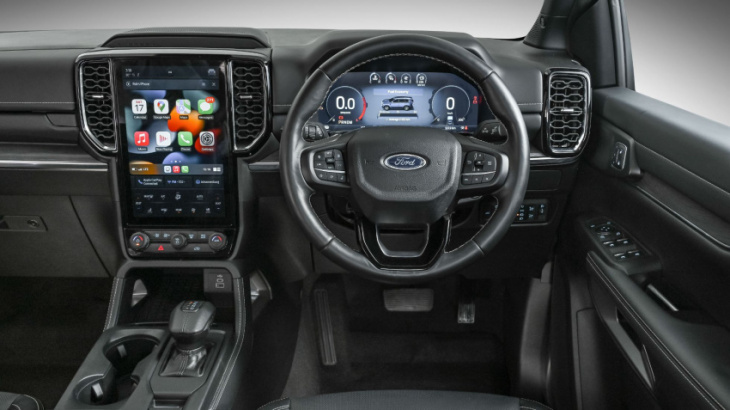 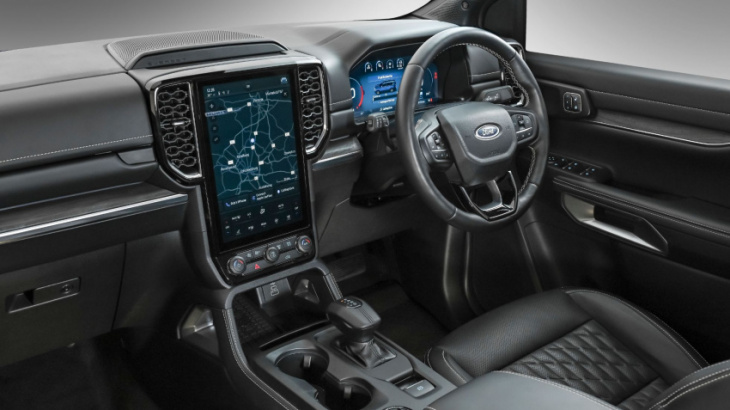 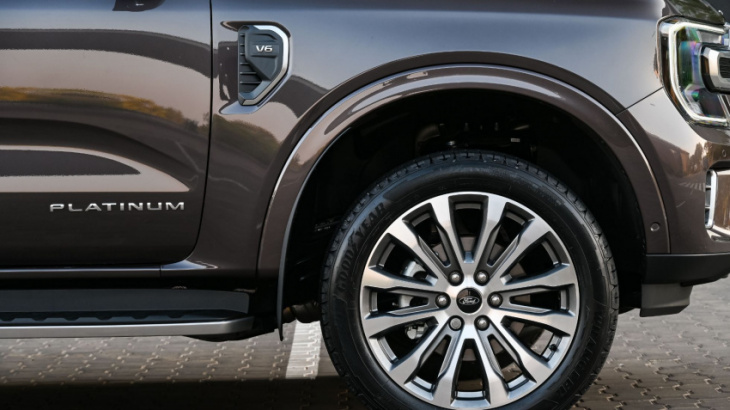 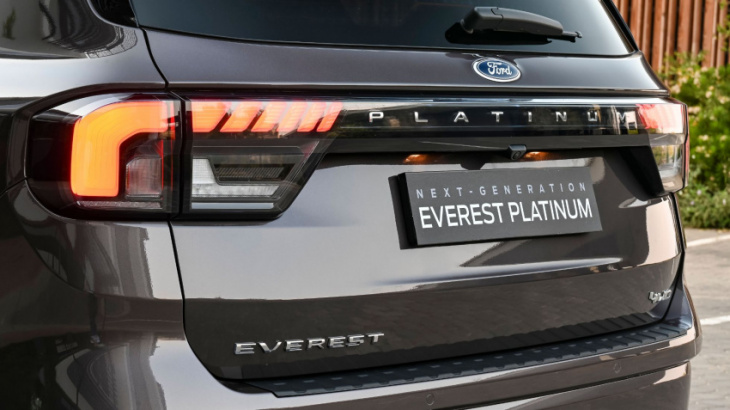 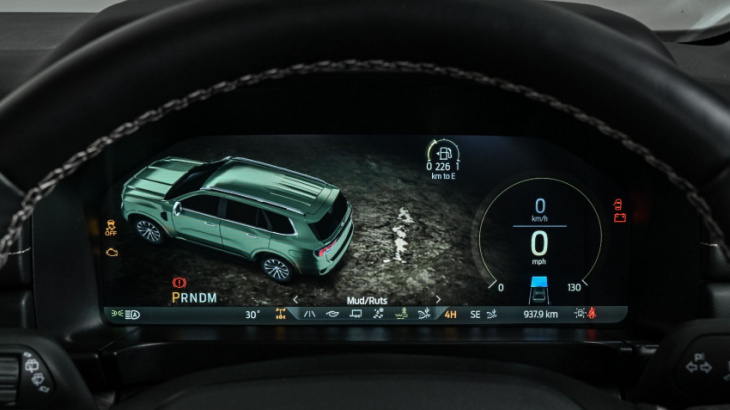 And here it is, finally, the new Ford Everest. It's not just the flagship of the locally-available Ford SUV range, but a genuine hit among some of the industry's most coveted demographics. It's a particular hit with family-minded millennials discovering they simply must have three rows and plenty of cargo space for those auspicious road trips.

The new SUV that launched in Mpumalanga this week, sits atop Ford's two-strong lineup of SUVs.

That said, the Everest was, Ford execs admitted, overdue for a revamp. The current, third-generation SUV dates back to 2015, albeit with nips and tucks along the way. If Ford really wanted to entice Gen-Xers and Millennials out of their EcoSports and the axed Kuga and into the bigger model, it needed to bring fresh technology, adaptability, and overall capabilities to the forefront.

Built for Toughness and Space

From the outside, it looks plenty tough, as you’d expect from a modern Ford but it’s only when you see the Everest next to a Ranger Raptor that the difference in scale becomes apparent.

So, the 2022 Everest still seats seven, but the cabin has more space for occupants to store their things. Honestly, you might want to add a Bluetooth tracker to everything you bring inside: there are twin cubby-holes, a huge central box between the driver and front passenger, multiple pockets in the doors, and more. In the boot, Ford has created a small lip, affectionately known as the “apple catcher”, at the rear of the cargo area to avoid spilled groceries from tumbling out when you open the door.

The second row seating now slides much further forward than before, and the seats tip forward and slide for easy third row access. In the Platinum model, the second row now gets reclining seats with a heating function for those brisk winter mornings, while a panoramic sunroof means the rear space is brighter and feels more roomy. There's also the addition of the B&O PLAY audio system with twelve speakers.

Up front, on either model, the driver gets the latest SYNC 4A on a 12″ portrait touchscreen along with Apple CarPlay and Android Auto and access to the FordPass app for remotely locking and locating the Everest. In place of traditional analogue clusters, the Everest Sport comes with an 8″ digital instrument cluster and a 12.4″ version on the Platinum. There are six USB charging points and 12 V points, while the Platinum is further equipped with a 400-Watt inverter for powering laptop computers and other devices. 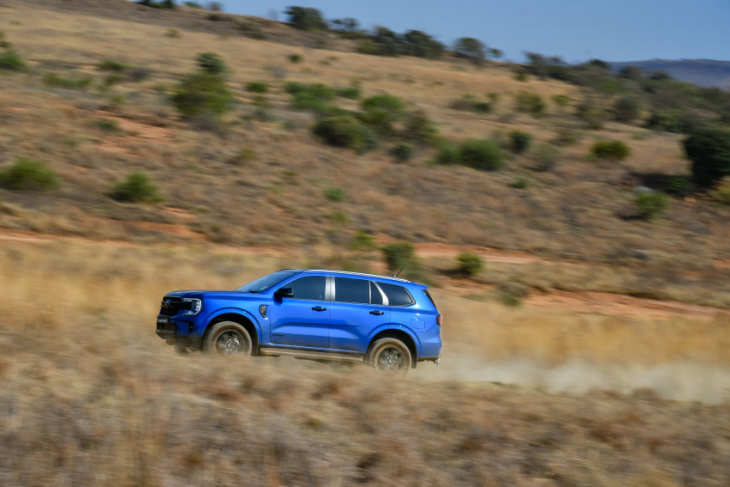 The Sport derivative soldiers on with the 2.0-litre Bi-Turbo

Under the bonnet there's a choice of two engines: Ford's proven 3.0-litre V6 turbodiesel engine that's good for 184 kW of power and 600 Nm of torque in the Platinum derivative and the 2.0-litre Bi-Turbo diesel engine that produces 154 kW and 500 Nm in the Sport derivative.

Ford's 2.0-litre engine is solid, but frankly the V6 is the one to have. It feels punchier than the 184 kW might have you believe with a torque onset that arrives relatively early.

Still, the 2022 Everest is a noticeable step up inside compared to the outgoing SUV. Cabin materials are of a considerable higher quality; the switchgear is more tactile, and the styling has borrowed the best of the F-150 while making convenience changes like an electronic gear shifter rather than a space-sapping mechanical stick.