The road to Hell is paved with good intentions ... but speed is higher than ever 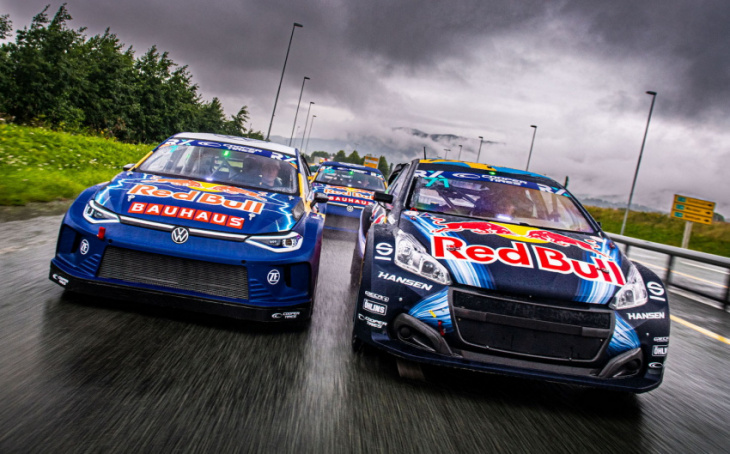 The FIA’s World Rallycross series is set to go fully electric from this weekend, with the debut of the series’ new top-tier RX1e cars in Hell, Norway.

Although the World Rallycross Championship has run the lower-level electric-only RX2e series since 2021 (and before that the one-year-only Projekt E series in 2020), the sport’s move to replace the old Supercar/ RX1 class with electric racing cars is significant in that it marks the first time an FIA motorsport series has fully made the switch from combustion engines to battery power. Motorsport series such as Formula E and Extreme E have been fully-electric since their inception.

Some of the new RX1e cars already look familiar, such as the Kristofferson Motorsport Volkswagen Polo, the Hansen Peugeot 208 and the Münnich Motorsport Seat Ibiza, but that belies the massive changes that have taken place under the skin — changes that have made the new cars considerably faster. 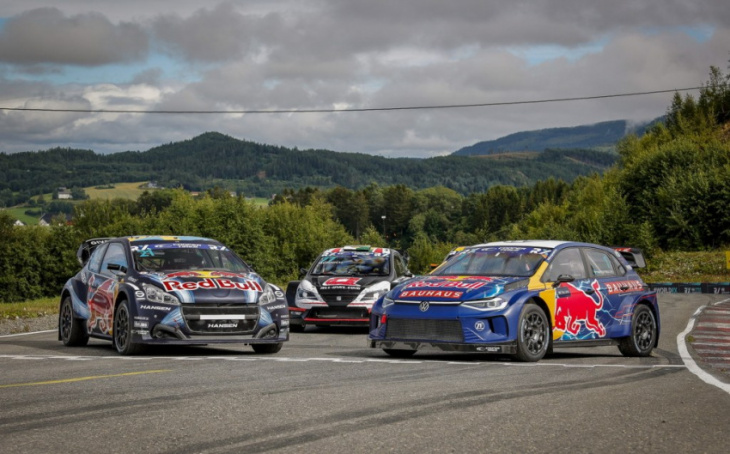 Taking the Kristofferson Volkswagen as an example, although it looks like the old Polo RX1, it’s powered, like the rest of the new RX1e cars, by a new modular powertrain from Austrian firm Kreisel.

The same is true of the Münnich Seat and it’s a similar story with the Hansen Peugeot, both of which are based on the last-generation combustion-powered cars, extensively reworked to accommodate the new battery packs and electric motors.

There are no manufacturer teams currently competing in rallycross, though both Kristofferson and Hansen are supported by VW and Peugeot, respectively. 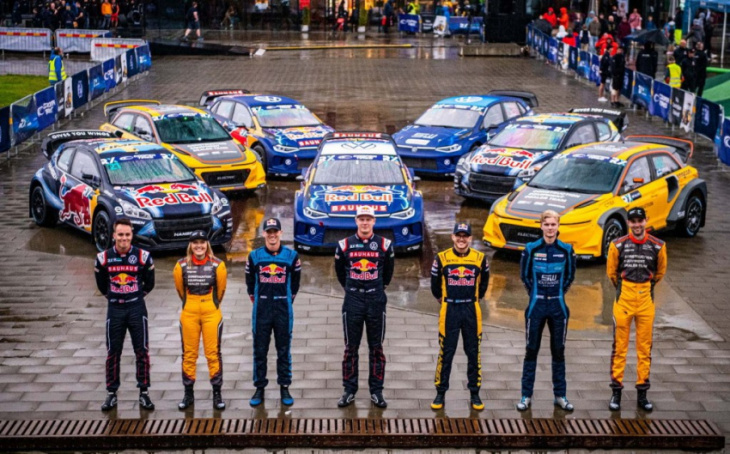 As with the old petrol-powered RX1 cars, the new cars are all-wheel drive thanks to their dual motors front and rear. They’re fitted with 52kWh battery packs from Kreisel, each weighing 330kg, and develop a total of 500kW, the equivalent of 680bhp, with 646 lb ft of instant torque on tap. The net result is a sprint time of 0-62mph in around 1.8 seconds.

“The acceleration is like something I’ve never seen before,” said driver Kevin Hansen, speaking at the new cars’ unveiling in the town of Stjørdal, prior to their racing debut at the nearby Lånkebanen rallycross circuit, outside the village of Hell.

“We thought the old cars were fast, but this is next level.”

An electric switchover for rallycross was first mooted back in 2018 with the intention being to run an entirely electric series from 2020. A change of promoter, however, delayed the transition and the arrival of a new promoter in 2020 gave added impetus to get an all-electric series running for the 2022 season. 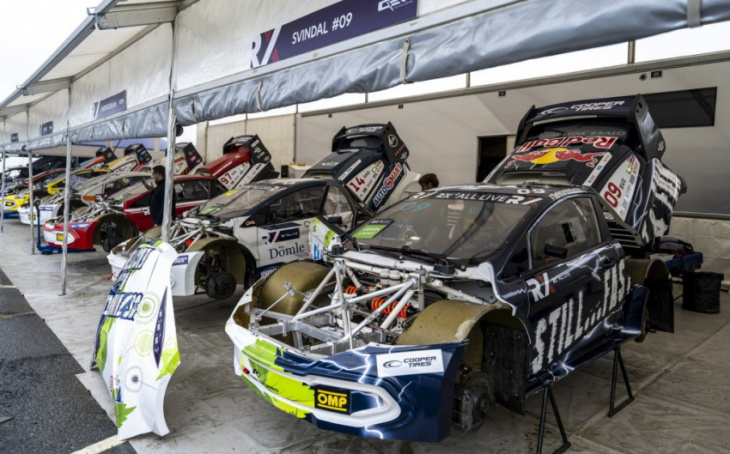 The development time for the new cars was, at around eighteen months, remarkably short, and so far, there has been little pre-season testing apart from a few laps of the rallycross circuit at Höljes in Sweden in the days surrounding the previous event.

The shakedown at Höljes revealed little in the way of significant issues with the hastily developed cars, Arne Dirks, executive director of the FIA World Rallycross series, told Driving.co.uk.

While the new cars have the old ones bested on outright acceleration, just how much faster they are overall was clear from four-time world champion Johan Kristoffersson’s performance in the Höljes test, said Dirks. Even though his laps weren’t officially timed, Kristoffersson, an old hand on his home circuit, believes he likely set a new lap record.

In many respects, rallycross is a perfect form of motorsport for electrification with intense blasts of full power and plenty of torque needed for a relatively small number of short laps. Rapid recharging at the circuits between heats mean action can be constant.

The battery packs feature a lifespan of at least four years according to the manufacturer, even with hard use and regular rapid charging. Aiding that longevity is a direct cooling system where a cooling fluid, specially developed by Shell, is in direct contact with the battery cells. 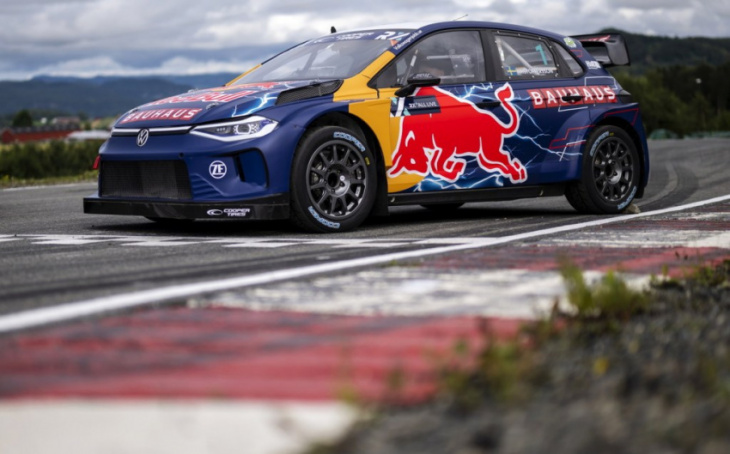 A long family history with rallying and rallycross is a recurring theme among this year’s competitors. The Hansen World RX Team, for instance, features two brothers, Swedes Timmy and Kevin Hansen who between them have won two world championships and whose father, Kenneth Hansen, was a fourteen-times winner of the FIA European Rallycross Championship. Their mother, Susann, is a three-times world champion, too, and team manager at Hansen WorldRX Team.

Driving for the Construction Equipment team is Finland’s Niclas Grönholm, son of Marcus Grönholm, twice winner of the World Rally Championship in 2000 and 2002, and Klara Andersson, whose background is primarily in karting but is linked to rallycross by her parents, who met at a rallycross event in their native Sweden.

The event in Hell marks the second round of the 2022 World Rallycross series, but because neither the teams nor the organisers felt that the new RX1e cars were ready for the season opener in Sweden, it was decided to postpone their first outing until the Norwegian round.

Part of the difficulty in readying the cars for the Swedish round was, according to Dirks, as a direct result of the global supply chain issues currently facing the entire automotive sector.

Indeed, not all the RX1e cars are fully ready yet. One of the most exciting entries in the 2022 season in this regard will be that of French outfit GCK Motorsport, as they will be using the body of the Lancia Delta Integrale, the legendary rally car of the eighties and nineties, following on from the company’s unveiling of a new Delta-based EV restomod last year. However, GCK is not expected to join until later in the season (it’s not currently clear when).

Because of the new rules, teams can theoretically use any kind of body style they choose as long as they also use the standard Kreisel powertrain. 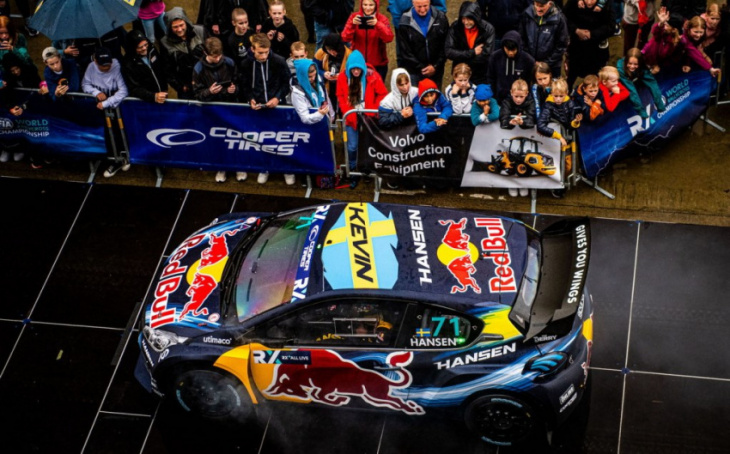 Just because the World Championship is going fully electric, that doesn’t mean that rallycross is turning into a totally silent sport any time soon. The FIA’s European Championship, also in action at Hell, will remain combustion-powered for the moment.

Sustainability, said Dirks, is also about sustainable costs, and totally ditching the existing car would not be sustainable from either an environmental or a cost perspective. However, as with Formula One from 2026, the series is looking towards ways to reduce its ecological footprint, for example by transitioning to alternative fuels.

Even though the drivers in the RX1e series are a mixture of Scandinavians and one German, there’s still some British interest in the RX2e category with drivers Patrick O’Donovan (son of veteran Irish rallycross racer Ollie O’Donovan) and Mark Flaherty.

It’s not yet clear if Extreme E driver Catie Munnings, who competed in an RX2e car in the Swedish round of the series, will return for further races.