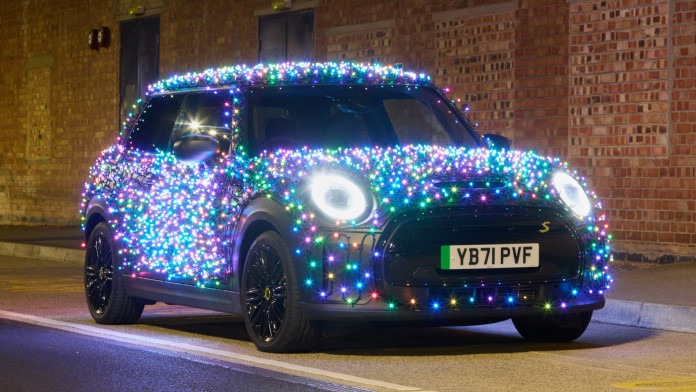 Jingle bells, jingle bells! Christmas season is officially here, and Mini UK has paired up with content creator Nicholas ‘Nico’ Martin to introduce a special ‘Festive Mini’, which Nico will be driving around as many streets as possible in his hometown to spread joy to the public, while also raising money for charity.

This is actually the fifth year that Nico has created the Festive Mini, and the second year with Mini UK’s support, but it’s coming back brighter than ever before, with 3,000 smart LED lightbulbs surrounding almost virtually the Mini Electric‘s entire exterior bodywork.

The lights can be wirelessly controlled via an app on Nico’s iPad, which can then be customised with custom animations, light patterns, messages, or even synchronised to music. And just like Christmas lights, the Festive Mini will also have an official ‘switch on’ ceremony, taking place tonight.

Each of these lights will be available to sponsor for GBP2 (approx. RM11), with funds raised to support two charities that are especially important to Nico – MS Trust and Duchenne UK.

What started off as just “a bit of fun” became a real force of joy in 2019 when a kind hearted resident around the neighbourhood asked if Nico could take the Festive MINI to surprise an 11-year-old boy called Marcus, who had been diagnosed with Duchenne Muscular Dystrophy when he was just seven.

Due to his limited mobility and now relying heavily on a wheelchair, it became difficult for Marcus to witness the Christmas displays around Berkshire. When Marcus first saw the lights on the Festive Mini, his face lit up with so much joy and excitement, and it was at that moment that Nico realised the true magical purpose of his project.

In December 2020, the illuminating car came to the rescue once again during the Covid lockdowns. What was already a difficult time for most people, was even harder for clinically vulnerable people with life-threatening conditions, like Marcus, but also Nico’s mother, who had been diagnosed with Secondary Progressive Multiple Sclerosis (SPMS) seven years ago.

With the usual Christmas displays and switch-ons cancelled, Nico sprung into action once again with his Festive Mini, bringing much-needed joy to the residents of Bracknell. It was also 2020 when the Festive Mini became a fundraising effort for the first time, raising over GBP5,000 for the MS Trust and Duchenne UK.

Ahead of this year’s fundraising period, Nico said, “I’m delighted to be bringing the Festive MINI back for 2022 to raise more money for charities that are really close to my heart. I love having the opportunity to cheer people up whilst raising funds for the MS Trust and Duchenne UK.”

“The continued support from MINI is amazing, and it’s brilliant to have the team involved again this year – while driving a Mini Electric helps to reduce my emissions whilst driving,” he added.

Keyword: ‘Festive Mini’ dresses up in 3,000 Christmas lights for charity

The MINI Aceman electric subcompact crossover has taken to public roads, as this sighting on the streets of Munich can attest.