Over the last year, many spy photographs of a new model in development by Ferrari have been circulating on the internet. Finally, the covers have been drawn on the highly anticipated Purosangue and we take a closer look to find out exactly what it is all about.

Ferrari is best known for its sports-, super- and hypercars when it comes to its production vehicle division. But recently, photos of a test mule leaving the factory gates in Maranello have captured the attention of enthusiasts of the Ferrari marque for different reasons aside from the normal. The test mule took on more of an SUV appearance than the low and wide vehicles normally associated with the Italian automaker.

And now, Ferrari has finally unveiled what they have been developing, the Purosangue. While the model shares proportions with vehicle types such as SUVs and Crossovers, the Italian marque maintains that the Purosanque is a GT car with five doors and four seats and their reasoning behind this is the engine placement which, of course, affects the driving dynamics. 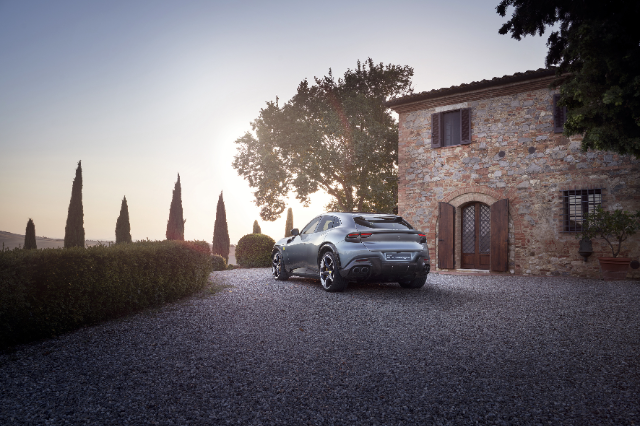 Although the overall proportions of the new Purosangue are drastically different from what Ferrari has produced in the past. The four-seater concept is very much part of the marque’s history and present. In fact, a variety of the most recent models have offered a 2+2 configuration, such as the Portofino M, Roma and GTC4 Lusso.

Where the Purosangue really changes the concept is in the fact that it is the first production model in 75 years of the Italian automaker’s existence to offer four doors. And to achieve this feat, the model stands taller than the typical models featuring the Cavallino on the bonnet. However, Ferrari maintains that the Purosangue is still a GT car rather than an SUV, and this all comes down to the engine placement. 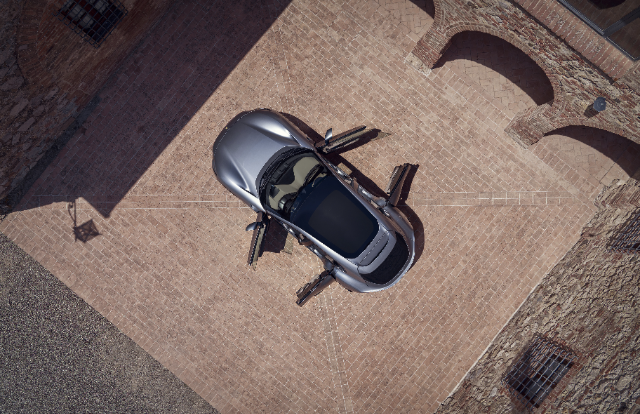 Under the large, front-hinged clamshell bonnet, customers will be happy to know that the Purosangue features a 6.5-litre, naturally-aspirated, 65°, V12 petrol engine. The motor is coupled to an 8-speed, dual-clutch transmission at the rear axle, and like the Ferrari GTC4 Lusso also incorporates a transfer case to propel the front wheels.

The four-wheel-drive system, or rather the 4RM-S system, has been further developed and now includes the upgraded control logic found in the SF90 and independent four-wheel steering as found in the 812 Competizione. What makes all this most impressive, due to the transaxle configuration, not only has Ferrari managed to mount the engine behind the front axle but has achieved an almost perfect weight distribution between the front and rear of the vehicle.

The culmination of all these technologies allows the Purosangue to sprint from 0-100km/h in just 3.3 seconds. In fact, it will reach 200km/h, from a standstill, in just 10.6 seconds and will continue accelerating to a top speed of over 310 km/h. 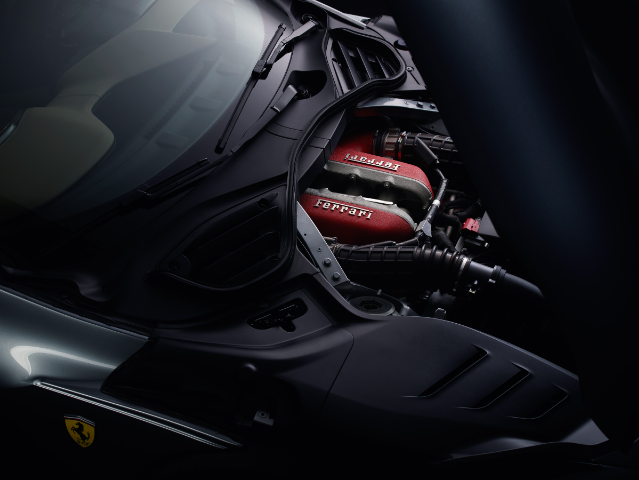 One of the key aspects of the Ferrari Purosanque is its proportions. The “thoroughbred” measures 4973 mm in length, is 2028 mm wide and stands 1589 mm tall. Although it might stand taller than most models leaving the factory doors at Ferrari, it still retains a sleek roofline as you might expect on a sportscar. However, unlike some sportscars, the Purosangue’s body is clean and uncluttered in its design.

Upfront, the model very much follows the new design language as seen on models such as the SF90 and Roma, while at the rear, the Italian offers details very reminiscent of the 296 GTB. Where one would expect a front grille, Ferrari instead incorporated a dihedral design, higher up and large air intakes taking up the lower portion.

The rear is similarly very characterful with many planes, angles and vents complimenting each other. Lower down, the Purosangue offers a large diffuser which assists with the overall downforce of the model. In contrast, to the front and rear, the sides are very clean and except for the character line flowing from the aerobridge on the flanks to the ‘hips’ at the rear quarters. What does draw a lot of attention on the sides is the large (22-inch front, 23-inch rear) forged and diamond-cut wheels. 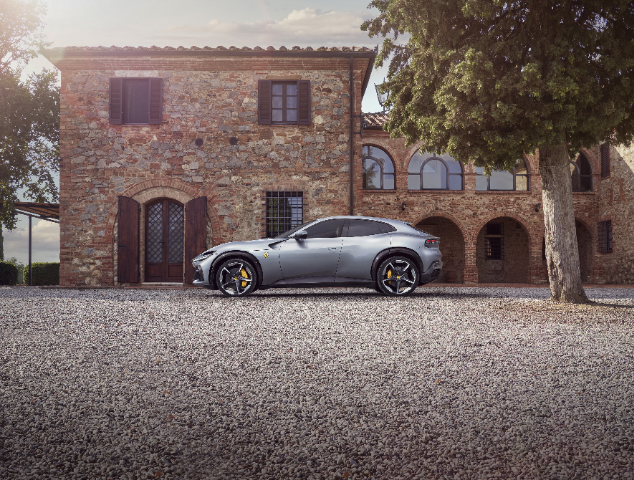 It is in the interior where things get even more interesting. Where traditionally Ferrari 2+2 models offer two full seats for the front occupants and then smaller units for the rear passengers, the Purosangue incorporates four full-sized seats and ample head-, leg- and shoulder room for all occupants. This Ferrari even offers a 473-litre boot for any luggage.

Ferrari has made sure that the front of the cabin is no longer purely driver-focused. While the pilot does get a fully digital instrument cluster which can be controlled from the touch-sensitive areas on the multifunction steering wheel, the front passenger also gets a 10.2-inch digital display with which they gain access to information such as the vehicle speed, engine speed, selected gear, and driving mode. 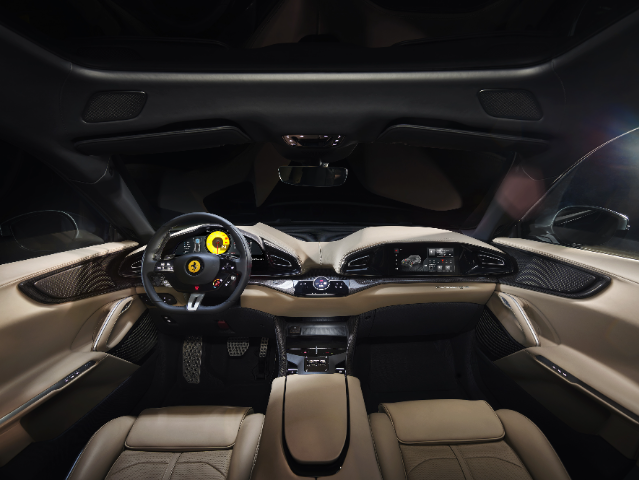 However, the front passenger can also use the display to control the infotainment system, among other features. This dual display configuration meant that the Ferrari designers had to create a cohesive environment for it to feature and, as such, the front of the cabin features a dual-cockpit layout which cocoons both front occupants.

As can be expected from a vehicle in this segment, the Purosangue sees its interior fitted with the finest materials. All four seats, the door cards and other soft-touch areas such as the dashboard and the central island between the rear seats come clad with soft leather and are contrasted by carbon fiber trim inlays. Another area on which Ferrari is focussing is utilizing sustainably sourced materials, and the Purosangue is an example of that. 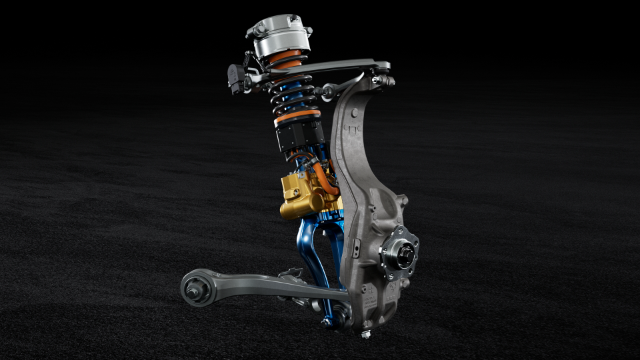 In order for the Purosangue to maintain its dynamic handling, Ferrari had to develop a new suspension system to combat the forces of the weight and tall ride height. This active suspension technology is named the TASV system after Multimatic’s True Active Spool Valve (TASV) System. The system utilizes 48V motor actuators to apply force on the dampers stroke.

The main advantage of using this electronic system is the rate at which it can apply force and the frequency at which it can execute its duties. Thus, even with its weight and tall stature, the Purosangue experiences minimal body roll in high-speed corners. Furthermore, the system also assists in maintaining the ideal amount of grip on all four wheels with information coming from the 8th-generation Side Slip Control system sensors. 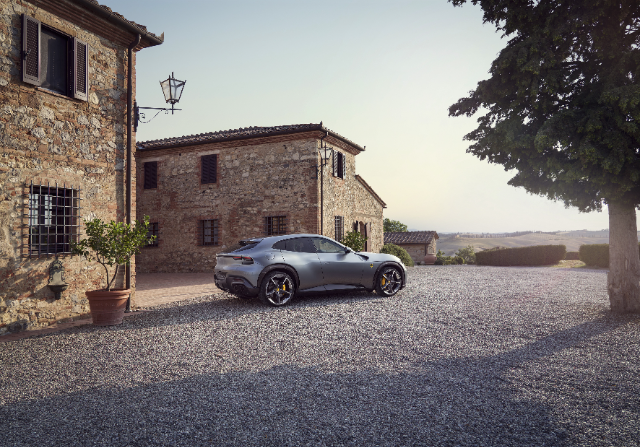 The name Purosangue translates to thoroughbred from Italian and considering everything Ferrari has done to keep the Ferrari DNA in a model so different from their usual creations, the name is apt. While for some the idea of an SUV-like Ferrari is not quite what they have expected, there is no doubt that it should be a popular model in the Cavallino line-up.

The first customers of the new model can expect some of the first deliveries to happen in 2023. However, the date of the local introduction, price and availability should be communicated at a later stage.

Ryno FourieRyno started his career capturing press images of the latest and greatest vehicles which have subsequently adorned the covers and pages of prominent motoring titles locally and internationally. After a short stint as a photography lecturer, he once again joined the automotive industry as a sub-editor and photographer for a local publication, however, currently, you will find him spending most of his time in the studio creating written, video, and photography content as part of the AutoTrader content team.View News & Reviews 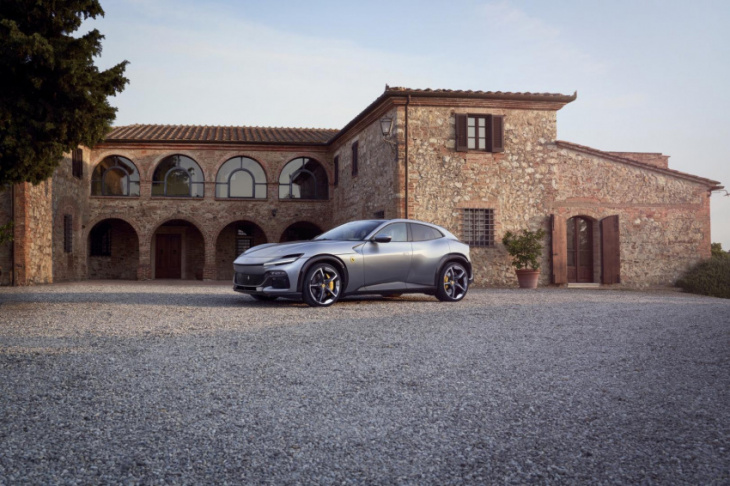 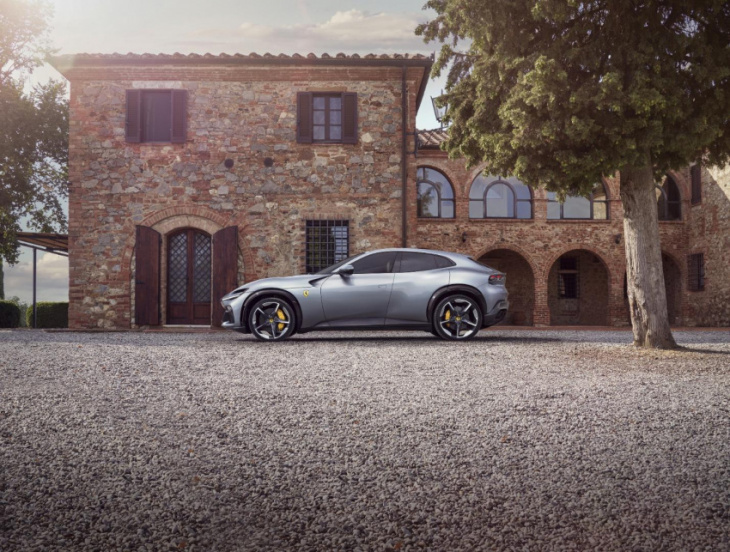 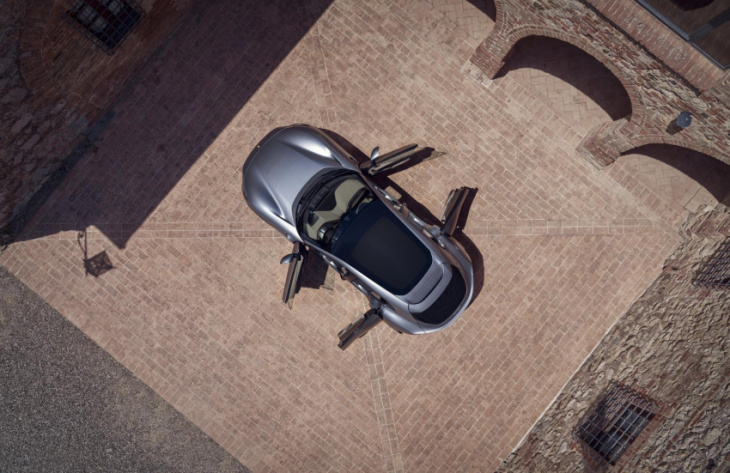 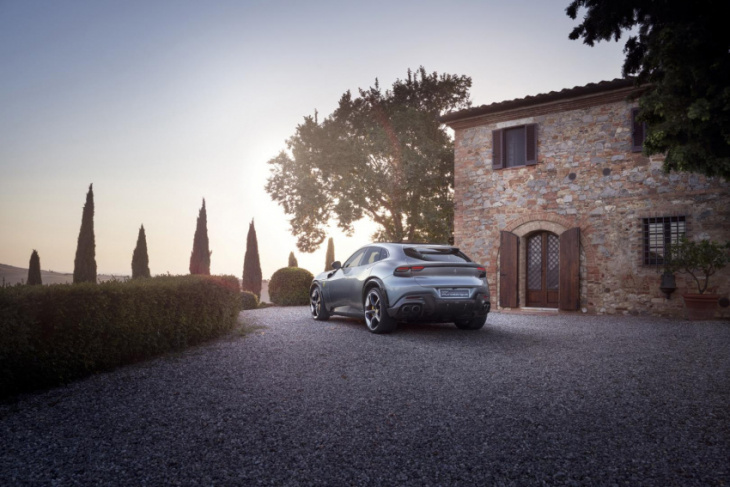 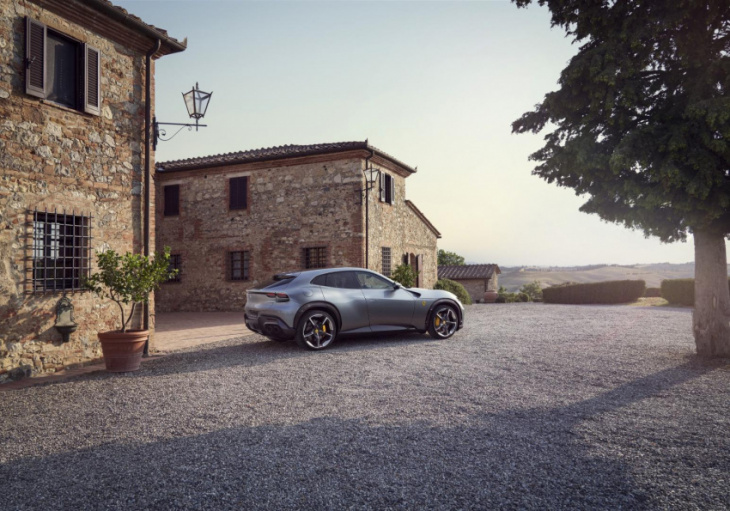 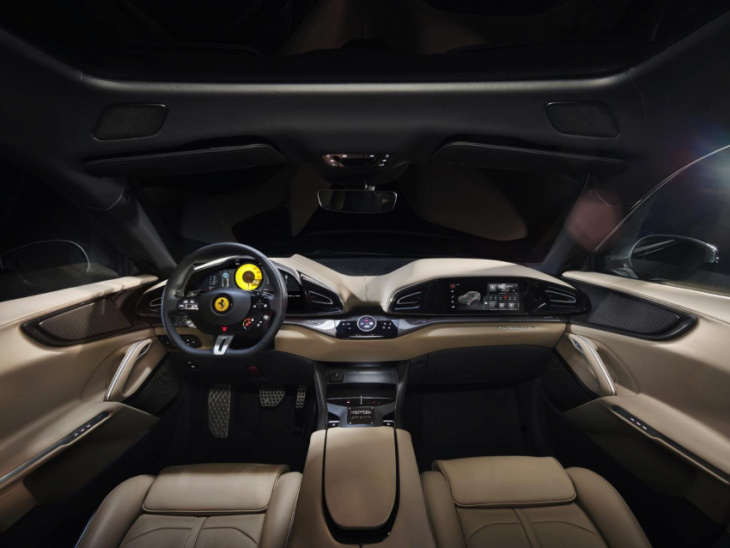 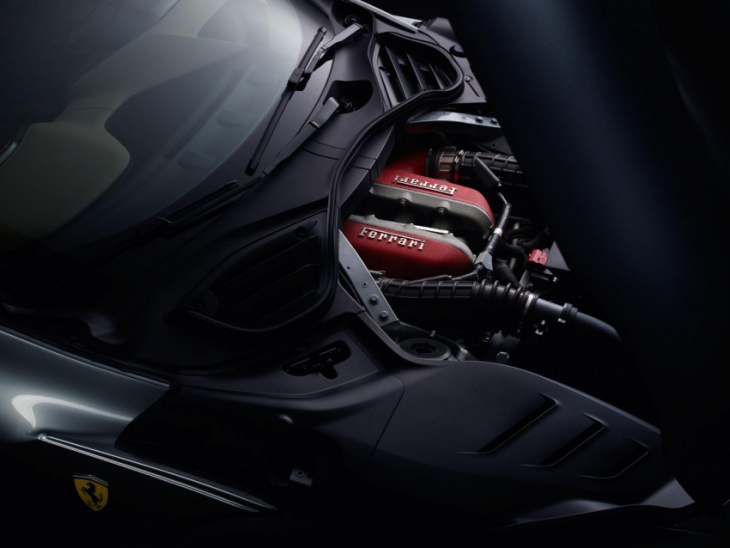 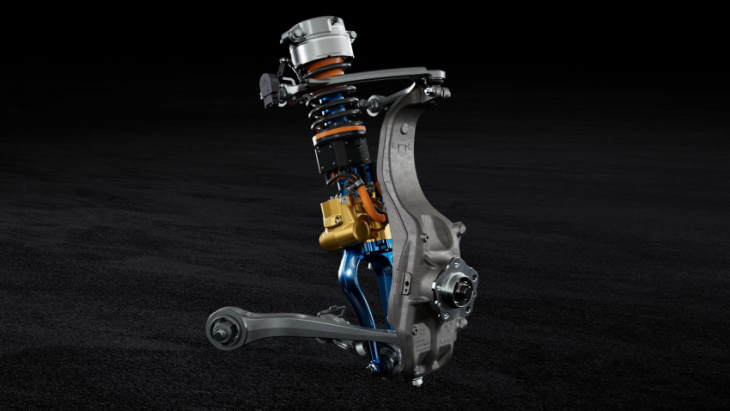