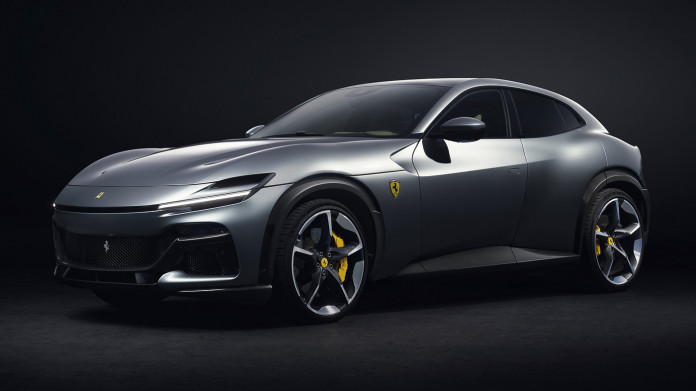 Fear it, run from it, but the SUV dominance arrives all the same. As much as Ferrari tried to avoid and resist it, they know that an SUV with the Prancing Horse badge is inevitable eventually – but at least, they’re doing it on their own terms. Say hello to the long-awaited Ferrari Purosangue.

Ferrari is absolutely refusing to call the Purosangue an SUV, instead labelling it as its “first ever four-door four-seater”, but we all know exactly what it is. Credit where it’s due, though, as the Ferrari designers have somehow managed to make the Purosangue look half the size it actually is.

That’s largely in part due to flowing bodywork and other clever design touches, which Ferrari’s top brass say has been designed with aerodynamics in mind – not to create downforce, but to reduce drag. Even the “floating” wheel arches are also there to help reduce turbulence around the wheels, in addition to help reduce visual bulk with its black or carbon-fibre finish.

The Purosangue looks like nothing before it, but at the same time still undeniably Ferrari, even at first glance – perhaps thanks to the headlights that bear a slight resemblance to the SF90 Stradale, or the taillights that seems to be inspired by the Roma. Regardless, it’s properly handsome, and comes across a lot more subtle than the spy shots would lead you to believe.

Interior space on the Ferrari Purosangue is maximised through a purpose-built chassis, which not only reduces the overhang on both ends, but also promises higher overall rigidity over the company’s previous GT models, all while also being lighter than before.

Ferrari says the cabin is designed to reflect a “sporty lounge”, with symmetry being the main theme of the interior. The instrument cluster binnacle is mirrored onto the passenger side, where you’ll also find a large secondary display for the passenger to get in on the action.

You might notice that there’s no central display here; Ferrari has abandoned built-in satellite navigation altogether, instead relying on Apple CarPlay and Apple CarPlay connectivity for that purpose, which will be displayed on the driver’s widescreen digital instrument cluster display.

Access to the first full-sized rear seats in Ferrari’s history is via the rear-hinged suicide doors that can open up to an aperture of 79 degrees via an electronic mechanism. And with this being Ferrari’s first four-door, four-seater family car, the boot is naturally the biggest it’s ever offered to date at 487 litres.

Ferrari is adamant that the Purosangue is a “true Ferrari” (the name itself means “thoroughbred” in Italian), so much so that they’ve also stuffed a new, but considerably old-school 6.5-litre naturally-aspirated V12 engine underneath the bonnet – not that we’re complaining.

Mounted in a front-mid position, the engine provides 725 hp and 716 Nm – with 80% of the latter already available from 2,100 rpm. Paired to an eight-speed oil-bath F1 DCT dual-clutch transmission with a four-wheel drive system sending power to all four wheels, the 2,033 kg Ferrari Purosangue launches off the line to 100 km/h in just 3.3 seconds, onward to a top speed in excess of 310 km/h.

The engine placement helps the Purosangue achieve an impressive 49:51 weight distribution, while the revised powertrain with a dry sump system allows it to sit lower to the ground, working hand-in-hand with the single-shell carbon-fibre roof to lower the SUV’s overall centre of gravity.

The Purosangue also gets a whole swath of advanced driving technologies, all to make it feel like a “true sports car”. These include the Italian supercar maker’s latest iteration of the vehicle dynamic control system seen on its most extreme sports cars, which even comes with a drift-friendly Side Slip Control, as well as a new active suspension system – the latter utilises Multimatic’s True Active Spool Valve (TASV) system, paired to a 48V electric active-roll damping system.

While not mentioned anywhere in the press release nor at the official unveiling, the Ferrari Purosangue is also expected to receive an electrified powertrain at a later date, with either the V6 plug-in hybrid powertrain of the 296 GTB or the SF90 Stradale’s V8 fitted in future versions.

I hate to admit it, but the Ferrari Purosangue does work as a Ferrari. Despite being a tall-riding SUV, the Purosangue stills adheres strictly to the core Ferrari design philosophy and brand principles, and the results just speak for itself.

Surely there will be haters, in the same way Porsche or Lamborghini fanatics despised the brands’ respective SUVs when they first came out. But looking at the sales numbers, with both the Cayenne and Urus now at the top of the charts, they’ve certainly made the right move despite the vocal resistance – business wise, at least.

The Ferrari Purosangue will undoubtedly enjoy the same success as the other ultra-luxury performance SUVs, but that’s only if Ferrari is willing to sell them. The company is adamant that the Purosangue will retain its exclusivity and never take more than 20% of the brand’s total sales, but when there’s money to be made, it probably won’t take much for Ferrari to change their mind.