Even next to the Urus Performante and DBX707, the Ferrari is in a different universe. 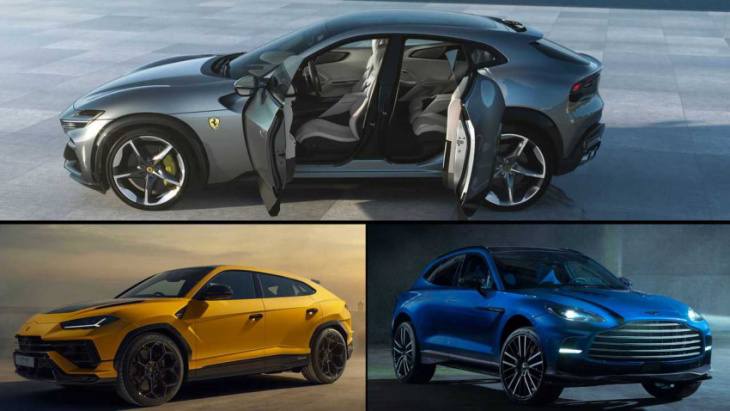 Here comes the inevitable comparison of arguably the three top super SUVs available today. However, we must acknowledge that this isn’t really an apples-to-apples matchup. It might seem that way initially, but the Purosangue lives a very different existence, and not just in terms of price. Keep this in mind as we explore the world of ultra-fast, ultra-exclusive, and ultra-expensive people movers.

And what a world it is. Who would imagine even as recently as 10 years ago we’d be talking about 190-mph SUVs from Aston Martin, Lamborghini, and Ferrari? Actually, that’s the first point of contention, because Ferrari is adamant that the Purosangue isn’t an SUV. Such branding isn’t uncommon among automakers seeking to promote a more exciting vehicle, but Ferrari backs up the claim with a Purosangue that features a lower stance, has better weight distribution, and offers more power than the competition.

Speaking of competition, at approximately $400,000 it’s also significantly more expensive than even the upgraded versions of the DBX and Urus, namely the DBX707 and Urus Performante. Those are the trim levels for which we’re comparing the Purosangue, which could itself evolve to offer an upgraded version in the future. Hence our disclaimer about this not really being an even comparison, but like you, we’re curious to see how everything stacks up right now. So let’s get to it.

This is what everyone wants to know, and the Purosangue holds nearly all the aces. Emphasis there is nearly, because Ferrari’s official 0-62 mph (0-100 km/h) time is just a tad behind the DBX707. Curiously, the Purosangue’s top speed is listed as being greater than 193 mph, the exact figure Aston Martin lists for its super SUV.

Power is nothing if you can’t use it, and Ferrari is keen to keep the Purosangue feeling like a supercar. We’ve already driven the DBX707 and know firsthand it’s an exceptional machine that belies its size. Until we’ve had a go in the Urus Performante and Purosange, we don’t know exactly how these stats will translate to real life. But with the lightest curb weight of the bunch and a rear-biased weight distribution, Ferrari certainly has our attention.

Thus far, the Purosangue has posted strong stats that favor performance. Here’s where the scales tip in the other direction, because that lower stance and weight advantage comes at a cost of convenience. It might be better to think of the Purosangue as a four-door GTC4Lusso instead of something in the crossover segment, giving up cargo space and off-road capability for on-road performance. That said, Ferrari does offer the Purosangue with hill descent control for those times you venture off the beaten path.

We’re not suggesting $232,000 is cheap, but that’s the starting point for the Aston Martin DBX707 and it’s nearly half the cost of the Ferrari.

With an approximate starting price of $400,000, the Purosangue is even pricier than the Rolls-Royce Cullinan, a vehicle that doesn’t really come to mind as a Ferrari competitor. That’s why it’s tough to classify this new Ferrari, but time will tell if buyers respond to something that indeed seems to be in a category all its own.

Aston Martin is still establishing a completely “unified clarity of purpose” as it attempts to become a major Formula 1 force according to technical director Dan Fallows, who hopes his move from Red Bull can help the team realise its ambitions. Fallows was finally able to make an earlier ...

The car that replaces the Lamborghini Huracán is rumored to get a twin-turbocharged hybrid V8 possibly making something like 850 horsepower. The engine’s origins and details remain in the shadows, but it’s possible we’ll get a preview of some of its components in Lamborghini’s LMDh prototype racer. The Italian ...

Rosberg: Piastri will be out of F1 if he doesn’t beat Norris Overview: How is the F1 2023 driver market shaping up? Felipe Drugovich undertook his first day in the Aston Martin factory at Silverstone earlier this week, after signing with the team earlier this month. On the day ...

It has a dominating presence like all the V12s before it.

Despite previously stating that the Sterrato concept is merely a one-off, it seems that the off-road-focused Huracan is very much in Lamborghini’s plans this year. The Italian supercar-maker has now teased the unannounced model once again, this time in a video dubbed “Beyond The Concrete – Part 2” that ...


View more: Lamborghini teases the Safari-style Huracan Sterrato by drifting it in sand