The day which Ferrari itself relatively recently said would never come, is upon us. Ferrari’s SUV, the Purosangue, is revealed. Is it the end of days? We don’t think so, for as with anything Ferrari turns its hand to, it’s very much taken its own unique approach. Indeed, SUV is nowhere to be seen in Maranello parlance. The Purosangue so says Ferrari, is the first in a brand new class of car. 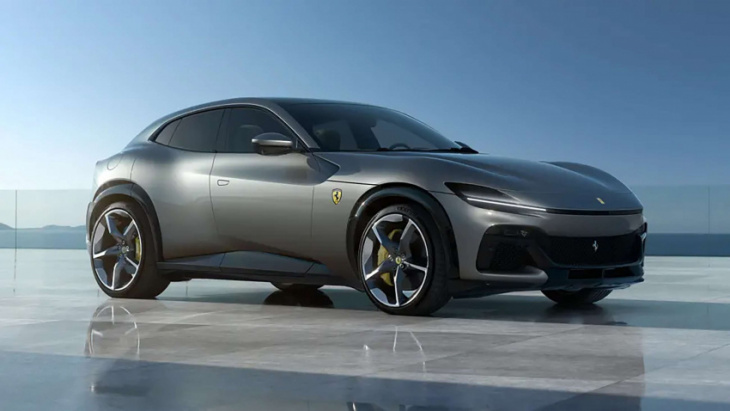 Let’s talk about the quintessentially Ferrari stuff first. Yes, it’s a V12, with a familiar howl, four trumpetous exhausts and a long flowing bonnet under which to live, though with the clam open, you can see just how far back it’s set. Displacing 6.5 litres and producing 724PS (533kW) and 716Nm (528lb ft), the engine has been reengineered to be more versatile through the revs and deliver more of its performance more of the time. Putting the power to all four wheels is a rear-mounted eight-speed dual-clutch transmission and a revised GTC4/FF-style power transfer unit, a kind of second gearbox, which sits on the front of the engine to feed the front wheels. Performance numbers are suitably impressive, with 62mph arriving in 3.3 seconds on the way to a 193mph top speed.

The chassis is all aluminium and entirely bespoke, with grand plans for its use across other models and with electrification in the future.  The weight is comparatively low for this sort of car, at 2,180kg at the kerb. For reference, the GTC4 Lusso was around 1,880kg at the kerb and incidentally, was possessed of a 30 per cent less stiff chassis than this new Purosangue. 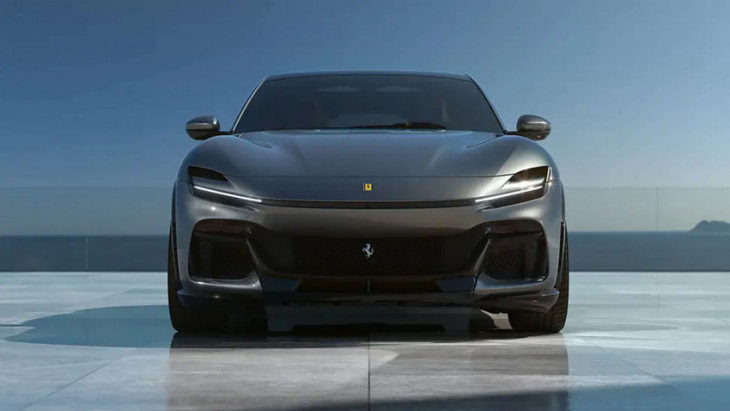 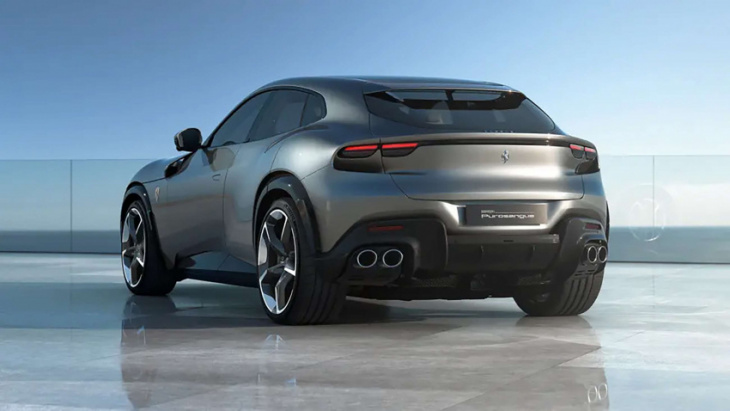 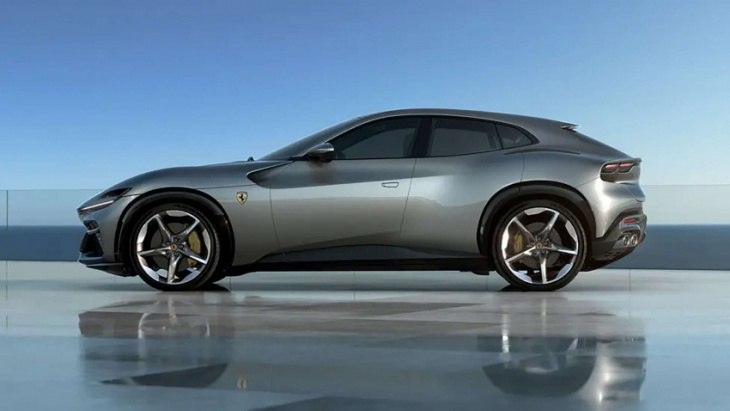 Ferrari have collaborated with Multimatic on the active suspension system for the Purosangue. Aiding the management of what must be a higher centre of gravity than any Ferrari yet made, is a 48-volt electrical anti-roll system paired with a hydraulic damper, working with Multimatic’s True Active Spool Valve. It’s such a comprehensive package that Ferrari’s actually omitted traditional anti-roll bars. Also aiding the Purosangue’s agility is an all-wheel-steering system, as seen on the 812 super GT.

It all sounds very Ferrari so far. The elephant in the room, though, is how does something even remotely resembling an SUV carry the elegance and presence of a Ferrari? Well, like this. To our eyes, this is a properly successful interpretation of the Ferrari look on a higher-riding vehicle. That long bonnet, the flowing lines, the broad hips and sturdy rump – the GTC4 lives on in this thing.

Clever surfacing, large 22 and 23-inch wheels, a swooping rear and the droop snoot hide the height, for a car that at its lowest setting, could really be seen as a proper follow-up to Ferrari’s shooting brake. Styling-wise, it’s a subtle mish mash of familiar elements, with 296-esque rear lights, a Roma-esque lower section of the rear and a mix of Roma and SF90 influences up front. After the 296 GTB, 812 Competizione and Daytona SP3, it’s nice to see a Ferrari launched with four traditional exhausts too. 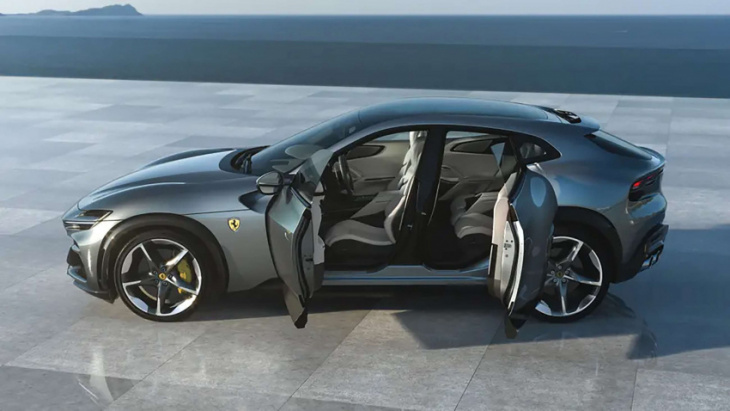 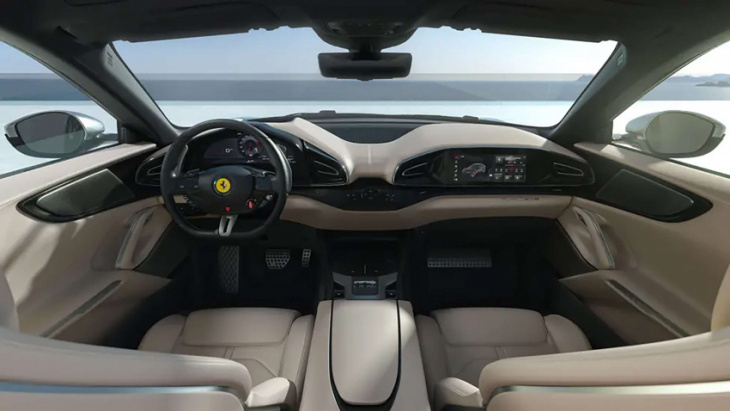 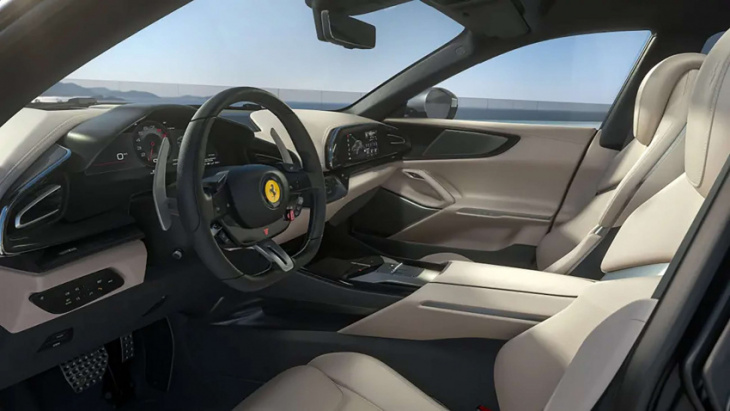 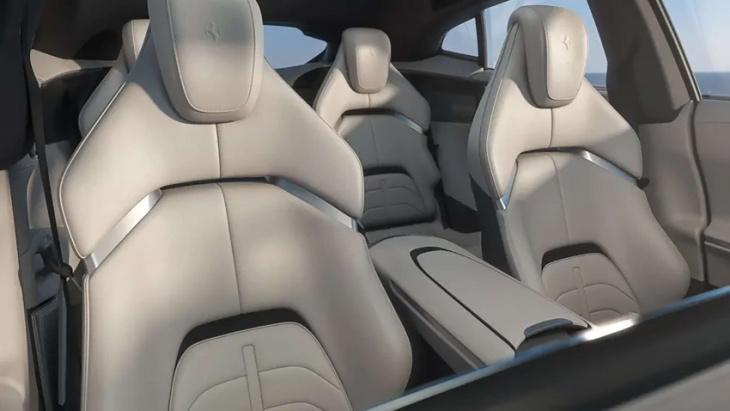 The inside starts with the outside, as to get aboard, you have to open the suicide doors, which were necessitated allegedly by the Purosangue’s bulbous hips. The steering wheel is familiar Ferrari too, though no ‘off-road mode’ can be seen on the Manettino. Instead, there’s the option of raising the ride height – why say it when you don’t have to?

Four individual seats welcome you in, resembling those found as standard in the Roma. The looks on the outside are deceptive, with the cabin appearing relatively light and airy. A driver-focused dash with a Roma, SF90 and 296-style binnacle is flanked by vents and is almost mirrored, minus the wheel, on the passenger side, which features the large infotainment screen. The broad centre tunnel flows through the cabin feeding into ventilation for the rear, with the now familiar ‘H pattern’ gear controls up front.

A panel with a rotary dial sits in the middle, dedicated to climate controls. While the Purosangue’s tapered tail doesn’t look to be too luggage friendly, the usual Ferrari tailored gear is available, as is lifestyle equipment such as a cycle rack. 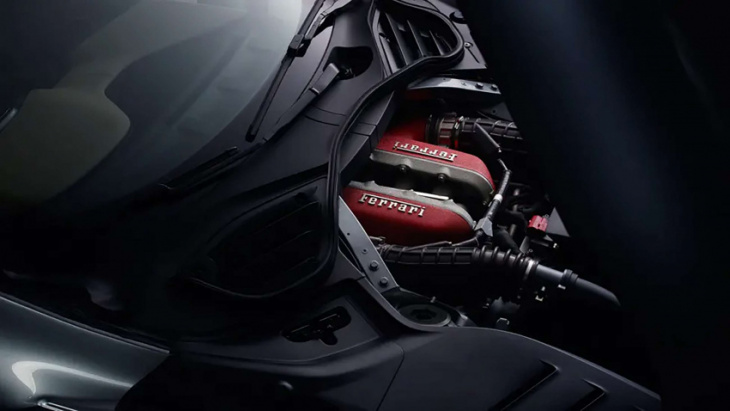 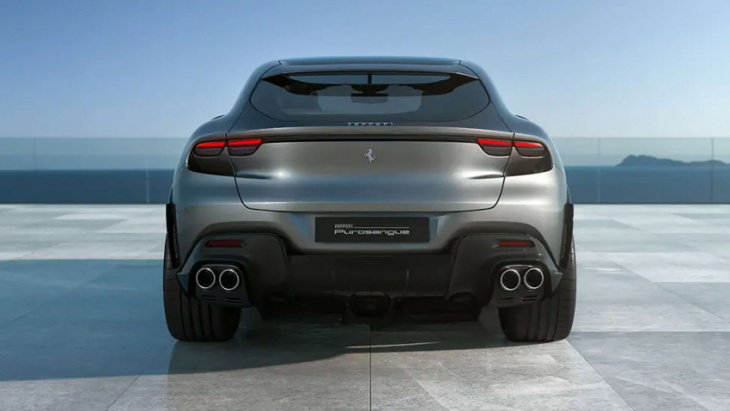 Ferrari is expected to limit production of the Purosangue. Though its very purpose is to appeal to a broader audience, less than 3,000 examples a year will be leaving the Maranello gates, to maintain exclusivity. The marque claims it’s sold out for two years, even with a price thought to be north of £350,000.

So what do you think of the Purosangue? The idea of anything like an SUV with a Ferrari badge is very strange still, yet we look at this and feel relief. It’s got the look and engineering of a true Ferrari and a true GTC4 successor, with its silhouette paying only lip service to the ravenous marketplace to which it caters. You get the impression that everything about this car is Ferrari biting its thumb at SUVs as they’ve been presented to us so far. The claim that it’s the beginning of a whole new class could be viewed as cynical marketing. That said, the Purosangue really is unlike anything we’ve yet seen.