Ferrari outlines unusual cause of penalty Leclerc took blame for

Leclerc came into the pits for a third time in the race on the 42nd lap of 44, fitting soft tyres in a bid to claim the fastest lap.

This briefly demoted him from fifth to sixth as Fernando Alonso overtook him on the Kemmel straight, but Leclerc re-passed the Alpine driver the next time around. However, his fastest lap bid failed, with his time ending up 0.630 seconds short of Max Verstappen’s best.

And it was then proven to have been actively costly, with Leclerc sanctioned for speeding in the pitlane during that last stop and dropping from fifth to sixth behind Alonso.

“The penalty is my fault. Nothing to do with the team,” Leclerc told journalists in the immediate aftermath of the race.

However, Binotto subsequently provided a mitigating detail, claiming the penalty was an “unlucky” consequence of the same situation that forced Leclerc to pit under the early safety car.

Leclerc had gone from 14th to 10th on the opening lap, but was then forced to pit as he had a visor tear-off lodged in the right front area of his Ferrari F1-75. 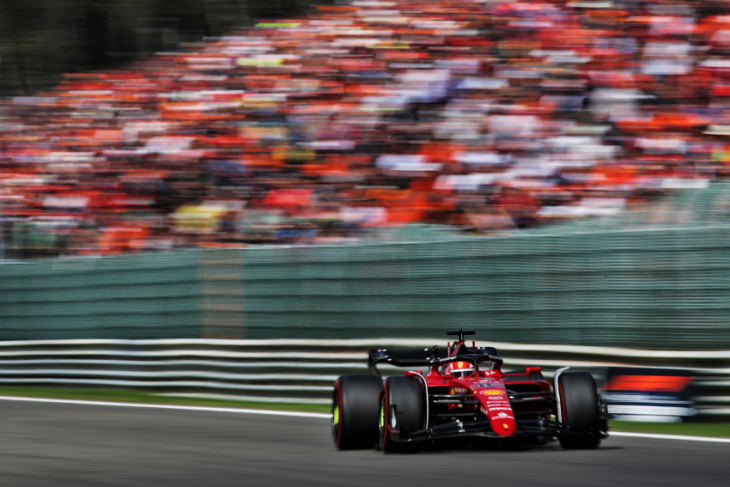 “The reason we oversped [in the pitlane], it was really really borderline, I think it was by 0.1km/h in the average speed in the pitlane, unlucky,” said Binotto after the race.

“We were not using our normal sensors measuring the speed because they had failed due to the overheating of the front right [due to the tear-off], and our [back-up] recovery strategy maybe was not so accurate for this 0.1km/h.

“Overall it has been an unlucky situation, it’s not because of that that we should stop deciding and being brave to go for a fast lap when the conditions are there to go for it.”

The stewards’ document announcing the penalty indicated Leclerc had breached the 80km/h pitlane speed limiter by 1km/h, although it did not outline whether this was a brief spike or a consistent speed.

There was no infringement during Leclerc’s first two pitstops of the race.

Binotto appeared to indicate the offending tear-off may have come from race winner Max Verstappen’s Red Bull – Verstappen having removed one during a “hectic” opening lap – but there is understood to be no way of knowing for sure.

The decision to pit late on effectively cost Leclerc two points, with Binotto acknowledging that “that’s the type of risk you may always have”.

But he stressed there was no regret over the decision itself.

“I think that the call to stop him was the right call,” said Binotto. “You need to be brave in F1. 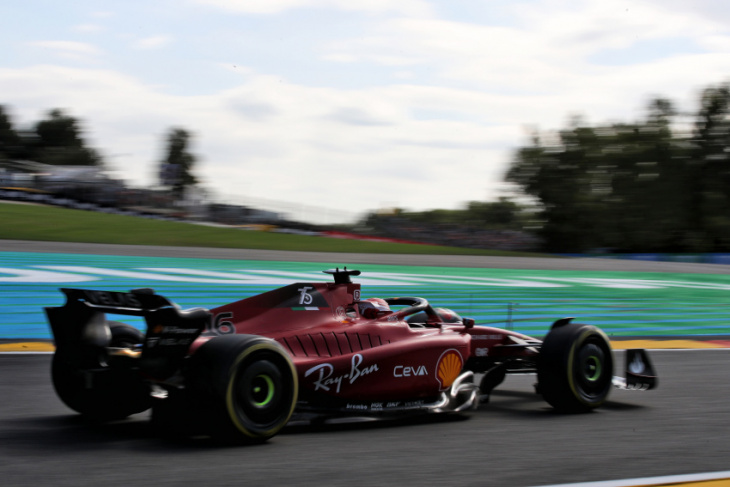 “If there is any opportunity to try to get the fast lap, and there was the margin on Fernando to stop and try to go for it, I think it was the right decision.

“We knew it would’ve been very close to Fernando, we knew as well that he [Leclerc] could’ve overtaken him [Alonso] back because he was on the fresher tyres and that would’ve helped [for setting the laptime] in terms of DRS and top speed in the main straight.”

Leclerc, for his part, was unconvinced by the late pistop during the race.

Once informed by the team of the Verstappen time, he twice said he “would not risk it” though ultimately made it clear it was up to the team.

Asked whether it was frustrating to lose points because of a late pitstop he never wanted, he said: “I mean… it’s like this. I don’t want to discuss about it too much.

“At the end it’s more frustrating to see the delta of pace there was between Red Bull and us. Which is the thing we need to work on.”

Michael Schumacher’s 2003 Ferrari F2003-GA is hitting the auction block with RM Sotheby’s next month. This incredible example of what was an almost entirely dominant machine is chassis 229, with no less than five grand prix victories to its name. Schumacher drove this very car to wins in Spain, Austria, ...


View more: You could own Michael Schumacher’s record‑breaking Ferrari