The difference may have only been two points, but Ferrari's latest unforced error may have been their worst yet. 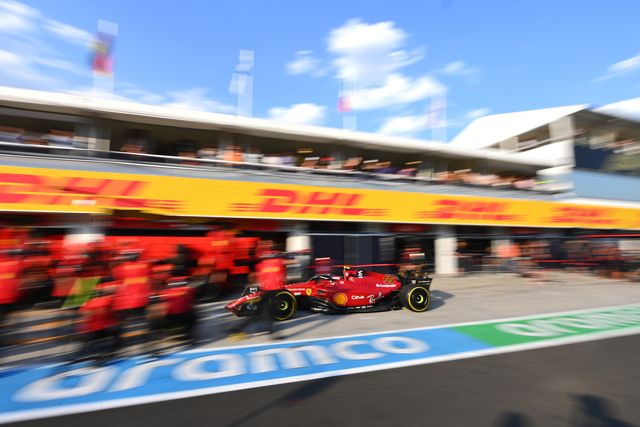 Although Charles Leclerc is dropping out of the championship picture quickly, Ferrari’s lead driver still has a shot to catch and pass Max Verstappen in the year’s final eight Formula 1 races. Every point counts, and the team saw an opportunity to effectively grab two more in the final lap of today’s Belgian Grand Prix. With Leclerc in fifth and almost exactly one pit stop delta ahead of Fernando Alonso, the team pitted their driver for fresh tires and a single shot at taking the day’s fastest lap from Verstappen.

Leclerc came out immediately ahead of Alonso, but he did so on completely cold tires and was passed a corner later. Rather than focus on getting fast lap, Leclerc then had to spend the final two laps of the race fighting to get past Alonso and take back the fifth position he had locked up two laps prior. As he had to instead focus on fighting Alonso, Leclerc also missed fast lap by 6/10ths of a second.

If that was it, the choice by Ferrari was still disastrous. By putting Alonso in play, Ferrari put Leclerc in a position where he could not reasonably fight for fastest lap even if Alonso had never actually passed him, meaning the team went from a guaranteed fifth-place finish to a battle for one with no real gain. But that wasn’t the end.

Leclerc was also found to have speeded in the pit lane. The penalty awarded was five seconds, added to the length of his race after the finish. With Alonso so close behind, that penalty knocked Leclerc down to sixth anyway.

If nothing else, Ferrari effectively demonstrated why a team should not take the risk in that situation. With such a narrow gap back to sixth after the stop, a speeding penalty is just one of many variables that a team can introduce with an extra stop. Slow tire changes and mistakes on cold tires are also in play, not to mention more catastrophic outcomes like the mis-threaded wheel nut that took Valtteri Bottas out of the 2021 Monaco Grand Prix.

The argument in favor of the move is that, by taking away a point from Verstappen and giving it to Leclerc, the team is effectively risking losing two points (falling from fifth to sixth) to potentially gain two net points on the leader. In reality, the presence of another car in the calculus at all made a clean shot at fastest lap far less likely than it would be in a more clear race. By chasing the smallest possible carrot, Ferrari brought the proverbial stick into play voluntarily.

China may be one of the largest customers globally for supercars, but you don’t expect them to develop their own home-grown version, right? And while Silk-FAW wanted to build one, they were beaten to the punch by Aion—GAC Motor’s EV brand with the Hyper SSR. Heading to production by ...


View more: GAC's Aion 1,255-Horsepower Hyper SSR Will Outrun A Ferrari For The Fraction Of The Price

Squaring up to the British competition Ferrari’s test car now treasured For the latest classic car news, features, buyer’s guides and classifieds, sign up to the C&SC newsletter here Despite Ferrari’s immense competition success during the 1950s and ’60s, the Scuderia by no means had a limitless budget at that ...