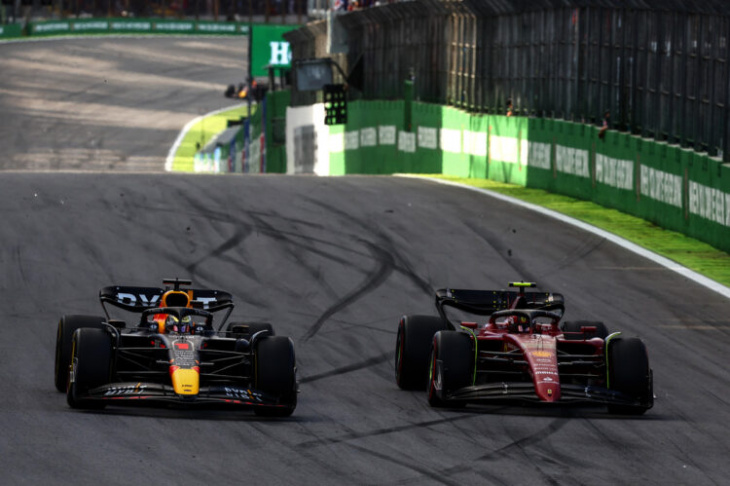 Ferrari’s Senior Performance Engineer, Jock Clear, reckons that the Italian side’s car this year was better at keeping its tyres in check than that of Red Bull.

The new, 18-inch rubber brought in last season under the new technical regulations posed a challenge for the drivers, as they encountered more difficulty getting the rubber up to temperature, particularly on colder track surfaces.

After winning two of the first three races in Bahrain and Australia, Charles Leclerc added one more to his tally in Austria, while Carlos Sainz took his maiden win in Silverstone.

One of the reasons posited as to the Austrian team’s turnaround from their disappointing start to the year was that, as upgrades were introduced to the cars, Ferrari’s tyre degradation became worse.

However, Clear reasons that, due to the Scuderia’s pace deficit, Leclerc and Sainz were forced to push harder, thus exacerbating the degradation they experienced.

“I think that’s a misconception to be honest,” Clear told Autosport.

“I think what we’ve struggled with is ultimate pace. We’ve got two drivers who got used to 12/13 races at the beginning of the year where they could fight toe-to-toe with Red Bull.

“And, of course, then you’re trying to race a car that’s actually quicker than you, and that will just manifest itself in tyre deg I’m afraid. So we don’t think that’s a big issue for us.”

In fact, the former Mercedes engineer believes that Ferrari’s tyres degraded at a slower rate than Red Bull’s but the pace disparity ultimately made the difference.

“Over the course of the year, when the cars were balanced, our tyre deg was slightly better than Red Bulls,” added Clear.

“But now [at the end of the season] we’re suffering from Charles going out there and just trying to keep up with Red Bull. And unfortunately, it’s a slightly quicker car.

“You just thrash your tyres a little bit too much, trying to hang on to it. And of course, it’s very difficult for Charles to say: ‘Okay, I can’t keep up, I’m just going to let him go.’ He’s a racing driver. That’s not going to happen.

“So you’re just using a bit too much juice and you pay for that in the long stints.”