It's the same fuel used by race cars in the World Rally Championship. 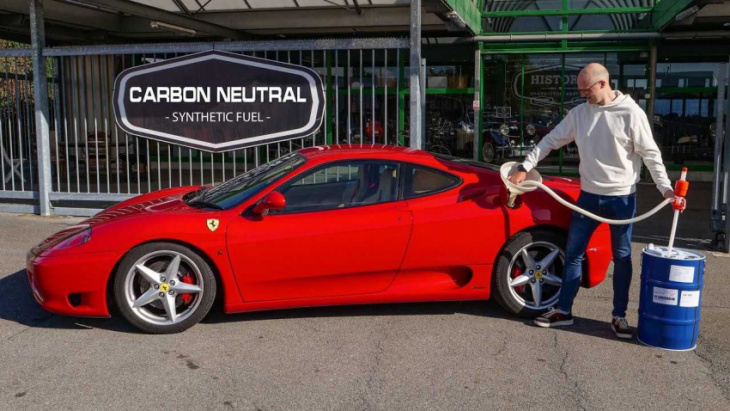 Synthetic fuels aren’t science fiction. They’re already here and being used in some applications, including racing. Racing fuel isn’t necessarily something suited for the street, but the Seen Through Glass YouTube channel ventured to P1 Fuels to evaluate the company’s biomass-based gas in a production vehicle.

Granted, the average person isn’t tooling around town in a Ferrari 360. But the supercar still serves as a benchmark for seeing how a street engine designed for fossil fuels performs with something a bit different in the tank. In this case, the fuel is produced with a combination of biomass and hydrogen. The biomass is crop-based, and when it’s all processed the result is a fuel that functions like gasoline.

Yes, that also means it burns and releases carbon emissions like gasoline. However, the carbon released is already part of the current carbon cycle, absorbed over months as the crops grow versus fossil fuels which have sequestered carbon for millions of years. As a result, the video states this is technically a carbon-neutral solution. Moreover, it doesn’t rely on a finite source of oil. Gather some old crops, process them into fuel with hydrogen, and you’re off to the races.

In the case of P1 Fuels, we mean that literally. The company already supplies synthetic fuel to the World Rally Championship, and the fuel was recently used as a demonstration in a 1990s-era F1 car. With such machines serving as examples, this Ferrari owner confessed to being comfortable giving it a test in the 360’s high-revving 3.6-liter V8. And to no real surprise, the car performed like a Ferrari should, with no discernable difference in performance. The only aspect not addressed by the video was fuel mileage.

The video also takes us inside Historic Competition Services in Belgium for a quick look at some glorious prewar classics like an Alfa Romeo RL. This isn’t any coincidence, as the video explains how synthetic fuels could help preserve a future for combustion engine cars, especially classic machines near and dear to the hearts of enthusiasts.

Perfectly rounded out and ready to rock and roll. Track days and supercars, that is the car enthusiast dream lifestyle and something you might expect from a Supercar owner. Maybe you’re one of the special few already but if you’re not then here’s an opportunity to make it to the ...

Vehicles like this were built to race! When people think about how German automotive brands have affected the global market in terms of performance cars, there is usually one manufacturer that comes to mind. That company is Porsche, one that is established over the years is the top of the ...

502 cubic inches is pretty big! Chances are, you’ve at some point been confronted by a hot rod on the racing track or local car show. Do you remember how it made you feel? Perhaps you fell in love with the rumbling sound of a V8 engine or maybe just ...

Bring home one of the last remaining 2023 Z06 70th Corvette Anniversary Editions. Do you dream of owning one of the most anticipated sports car models of all time? We’re of course talking about the next C8 generation Z06 Corvette. These cars haven’t made it to the road yet, and ...

This would be such a cool truck to bring to a tailgate or car and truck show. Listen here muscle mania, if you love America, Arnold Schwarzenegger, and the US Military then there is a car out there practically built just for you. That automobile was called the Hummer, a ...

This is one of 42 made… When you think of a classic car that combines luxury, style, and performance, there is one brand that may stand out particularly well. That has got to be Packard, at least for many enthusiasts with knowledge of the company. Models like this one, which ...

Ferrari sold a record-breaking 13,221 cars worldwide during 2022, eclipsing its previous record and showing demand for ultra-luxury sport cars is greater than ever. The 2022 sales result is 18.5 per cent stronger than the previous year. It also comes as luxury brands such as Lamborghini, Bentley and Rolls-Royce announce ...


View more: Ferrari sold more cars in 2022 than ever before