Feger Gets A Break At Davenport 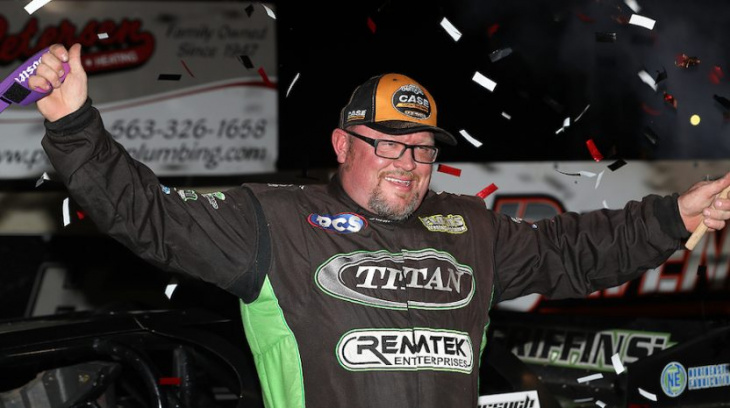 DAVENPORT, Iowa  — Jason Feger made the most of a second chance Thursday night at Davenport Speedway.

It appeared heartbreak had struck when he lost the lead to Devin Moran in traffic with 12 laps to go. However, Moran’s tire went flat during a caution six laps later, giving Feger the top spot again — a rare second chance he didn’t let go to waste.

From there, the “High Side Hustler” used the outside lane to stay in front, holding off a hard-charging Bobby Pierce to win night one of the Quad Cities 150 presented by Hoker Trucking with the World of Outlaws CASE Construction Equipment Late Models.

Feger stated he’ll take the win any way he can get it, having been in Moran’s position on a few occasions.

“Obviously [Moran] is really good, and he’s really good here,” Feger said. “I just kind of got stuck behind a lap car there and let him sneak by me.

“I wish I could’ve had the chance to race him a little bit better. He did a great job. I just kind of got pinned in there, so it was kind of frustrating in that aspect. It sucks for him, but it’s good for us. We’ll take it. We’ve lost plenty of them that way, so you can’t feel bad winning them that way.”

Moran, who settled for 10th, looked to be on track for his second consecutive World of Outlaws CASE Late Models victory before his tire went flat. He stated he’s already looking toward the potential $40,000 in winnings still up for grabs between Friday and Saturday.

“That’s why they call it racing,” Moran said. “It’s definitely a bummer. There’s just a lot of things that’s happened to us the last few days. The truck tires blew out, another car broke down, and that happened.

“But we’ll just suck it up and make sure everything’s ready for [Friday] and Saturday and hopefully take advantage of a fast race car.”

While Feger inherited the lead from Moran, he still had another challenge before the race was over — Pierce.

The “Smooth Operator” swung underneath Feger on the final lap to try and beat him to the finish line, but Feger held his ground and let his momentum carry him to the $10,000 prize.

Feger stated he felt like he was hanging on at the end, fighting through handling issues.

“The crumbs here really get your tires overheated,” Feger said. “I felt horrible at the end. I felt so bad I thought my tire was flat. If you look at it, it looks fine. It just must’ve been overheating. But you just have to tell yourself that everyone probably feels that bad.

“After talking with Bobby and stuff, he said he felt the same thing. Then you just kind of have to do the best you can with an ill-handling race car.”

Pierce crossed the line second — half a car short of scoring his third World of Outlaws win of 2022.

“If I was going to do a slider, it would’ve been coming to the white flag in Turn 1,” Pierce said. “I was trying to get the perfect situation where I was like right on his bumper, but every time we came off the corner, it wasn’t quite there.

“I was catching something in (turns) three and four and it was allowing me to get close, but by the time I got down the straightaway, I just wasn’t really confident I was close enough.”

Tanner English grabbed the final spot on the podium.

“I was waiting for [the inside] to come around,” English said. “I was just hanging on there in the heat race and waited for it to come around in this Feature, and that’s kind of my deal. I’m pretty good down there, I rotate the bottom good and set up for it, and the car came alive and I passed a bunch of cars.”

“We’re still kind of getting back in the swing of things,” Winger said. “This deal is so relatively new to me and getting interviewed seems like it’s starting to get new again.

“I always kind of struggle here at Feature time whenever you have to have forward drive and chase the race track around. I get married to that cushion, and I can only hit it right two out of every maybe three laps.”

Billy Moyer, a three-time series champion, rounded out the top five. It’s his best finish since getting behind the wheel of the Tim Lance-owned car.

“We’ve ran a few times, it just seems like we’ve really been snake-bit with a lot of problems since I’ve been driving Tim’s car,” Moyer said. “Finally, tonight, we got to finish and move forward from where we started from. It’s a new car, and I think I’ve only ran this car once and I’m learning it. So, I think I feel really good about everything we’re learning as we go.”

Keyword: Feger Gets A Break At Davenport