Eric "Rocketman" Teboul wanted to retire from the sport in style, and he set a high bar to beat. 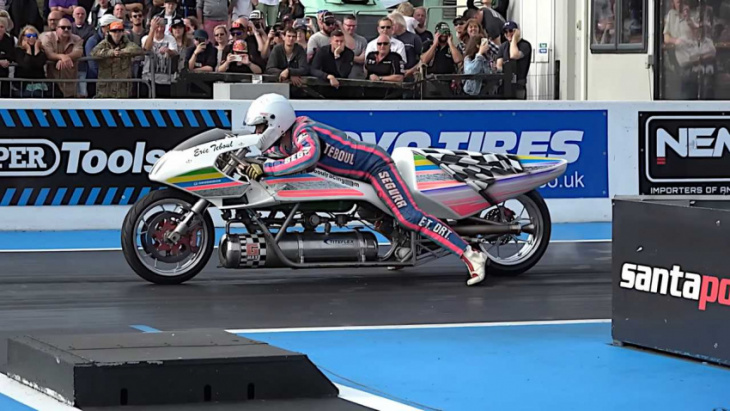 Even if you’re lucky enough to do something that you love—what do you imagine your retirement to look like? If you’re a racer, quite naturally, you want to go out on top. What if you’re the guy who set all the most recent records in the first place, though? When do you decide enough is enough, and you’re finally ready to hang up your leathers?

French motorcycle drag racing legend Eric “Rocketman” Teboul had previously announced that the 2022 FIA/FIM European Drag Racing Finals at Santa Pod Raceway would be the site of his official retirement from the sport. This isn’t the first time we’ve talked about Teboul—and since this also isn’t the first time he’s said he’s retiring, we’re not so sure it’s the last. What we are sure about is that way too fast is still apparently not fast enough for this guy.

Back in August, 2019, we were utterly astonished when we told you about Teboul’s rocket bike, which hit a 220 mile-per-hour speed while accomplishing a quarter-mile run in just 5.64 seconds. It was also at Santa Pod—but that was then, and it’s now three years later. Teboul’s still riding his hydrogen peroxide-powered rocket bike—for which he apparently mixes the fuel himself.

When you’re already the best in the world, what do you do to say goodbye to your fans? You put on a show, of course. The 2022 FIM Euro Finals ran from September 8 through 11, 2022 at Santa Pod Raceway in Northamptonshire, England—and on Saturday the 10th and Sunday the 11th, Teboul set first one, then another new world record.

On Saturday, he achieved a quarter-mile time of 5.066 seconds, racing at 263.52 mph down the strip before he came to a halt. At that time, it was his career-best—so of course, he had to have another go. (The thing about overachievers is, they’re just never satisfied, amirite?)

As race time on Sunday, September 11, 2022 approached, Teboul readied himself and his bike. He went through all his normal pre-run routines, climbed into his leathers, strapped on his helmet, did some stretches to limber up, and then mounted his rocket bike.

Although the grandstands were clearly packed, as you’ll see in this video, you could probably have heard a pin drop as the crowd awaited his final performance with bated breath. If you blinked at the wrong time, you might just have missed it—because Eric Teboul set a new world record to say goodbye to his fans. Topping even his Saturday performance, Teboul managed to break that elusive four-second quarter-mile barrier at last. The final run time was 4.976 seconds, at a truly ludicrous speed of 290.51 miles per hour.

Teboul completed the run, and successfully ran his bike out of propellant safely after hitting the quarter mile (that’s important, because that’s the only way this type of bike can stop). Calculations correct, piloting on point, and job absolutely well done, Teboul went on to collect his well-earned accolades and applause from the crowd. Congratulations on such a monumental achievement!