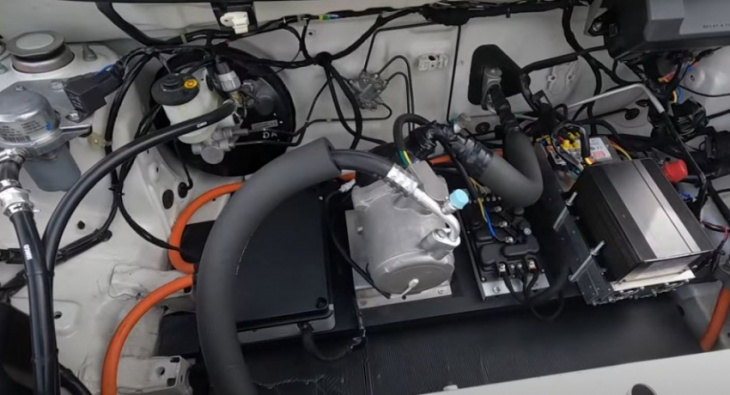 PETALING JAYA: A YouTube video has popped up yesterday showing the first Perodua Axia in Malaysia that has been converted into an EV.

On the outside, it looks like your regular Axia. But the big changes are under the bonnet, the dashboard and of course, what lurks behind the fuel cap.

The electric Axia is the handiwork of local start-up EV Innovations, the team behind the MyKar project, that converted a Honda Jazz in 2020 to run purely on electricity.

The latest video is presented in Bahasa Melayu by one Hasbullah Syarah and offers a fascinating look at an EV conversion of one of Malaysia’s most popular small car. Hasbullah said he’s a lecturer at a public university and has a background in mechanical engineering.

He said EV Innovations had invited him to the Sepang track to test-drive the car.

With the conversion, the engine bay looks spartan. The engine has been replaced by a bunch of electronics and high voltage cables. Hasbullah proceeded to show the various components such as the kill switch, relay, voltage controller and electric air-condition compressor.

The 23kWh Li-ion battery is located below all the electronic components.

A 12kW electric motor is fitted to each of the rear wheels, making it a rear-wheel drive Axia.

The car comes with a Type 2 charging port. Charging at 6kW takes 4 hours to bring the charge level from 0 to 100%. The car accelerates from 0-100kph in 11s. Range is reported at 220km, which makes the electric Axia ideal for urban commuting.

The cabin looks almost the same as the regular Axia except for a driver-side controller and a big diagnostic touchscreen in the centre of the dash that monitors all parameters of the car including motor temperature.

As a precaution, the electric Axia comes with two fire extinguishers onboard.

Hasbullah claimed there is no difference in handling between the regular Axia and the electric version.

The biggest difference is in the acceleration, he said. With maximum torque available instantly from the get-go, electric cars are able to easily outpace combustion engine cars from a standing start.

The video has managed to attract over 140,000 views in the short time it has been posted up, underlining a huge interest in such conversions.

The electric Axia is still very much an experimental car.

We reckoned if EV Innovations can develop a safe and commercially available conversion kit for popular car models, there would be a ready queue of customers lining up at its garage.

Meanwhile, Perodua is keeping its options open on making electric cars as it believes the combustion engine still has a long lifespan ahead.

It is taking baby steps in its electrification plan. It did say in August that it would start off with a series hybrid rather than a plug-in hybrid if it decides to start making electrified cars. Pure electric cars are not under consideration in the short term.

It is currently testing out the