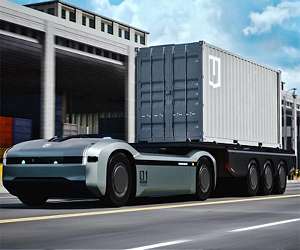 The truck, without even a cabin for drivers and passengers, features Level 4 autonomous technology, said the carmaker. It will be first used at ports in 2023.

Another futuristic model unveiled on Monday was a van, which can be used as both a passenger car and a commercial vehicle.

Farizon said the van’s space can be customized so it can better meet the buyers’ demands, serving as a logistics van, a mobile cafe or even a streaming studio.

The carmaker also announced that it will soon start its round-A fundraising. Last month, it raised over $300 million in the pre-A round.

The round of investment was led by Hidden Hill Capital. Other key investors include Transfar, Citic Securities Investment and Industry Foundation of Xiangtan.

Farizon said it will spend the majority of the investment on research and development in order to further consolidate its market-leading position in the new energy commercial vehicle sector.

The carmaker has already built up a market-leading position in China’s new energy commercial vehicle market.

As of September 2022, its monthly sales ranked first in the sector for five consecutive months.