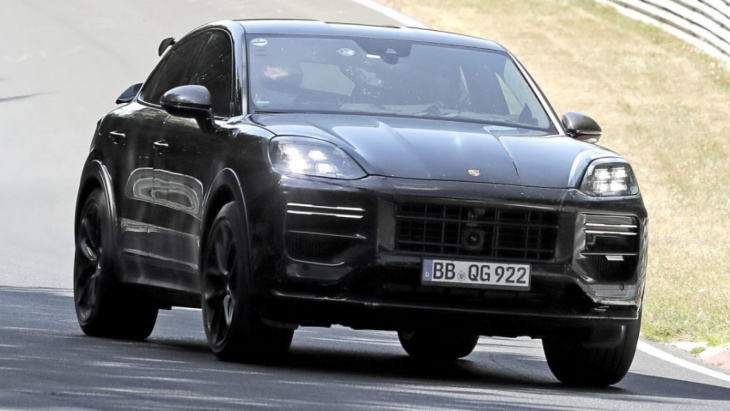 Having spotted the upcoming facelifted Porsche Cayenne in Turbo and regular S form, we can now add Turbo GT to the mix with these latest images. The current third-generation Porsche Cayenne has been on sale here in the UK since 2017, so a mid-life refresh is due.

We’ve seen the Cayenne testing as an SUV and as a coupe-SUV, these Turbo GT pictures show a coupe bodystyle and we expect the Turbo GT will again be only offered in coupe form.

The level of camouflage on these Cayenne test cars is minimal, suggesting its full reveal could happen before the end of the year. The Turbo and S body styles feature the same front end, with larger, reshaped headlights incorporating Porsche’s quad-LED running light signature, along with a slightly reprofiled front grille featuring thinner single strip indicators.

Images of other iterations of the facelifted Cayenne also show the bonnet will be tweaked. We can see a pair of narrower strakes along its length, and the lower front bumper appears to have gained a set of even bigger air intakes under the headlights.

At the rear, the Cayenne and Cayenne Coupe will receive redesigned LED tail-lights and a new diffuser, with the standard SUV repositioning the number plate below the tailgate. The only other obvious change is a tweaked lip spoiler for the coupe model. 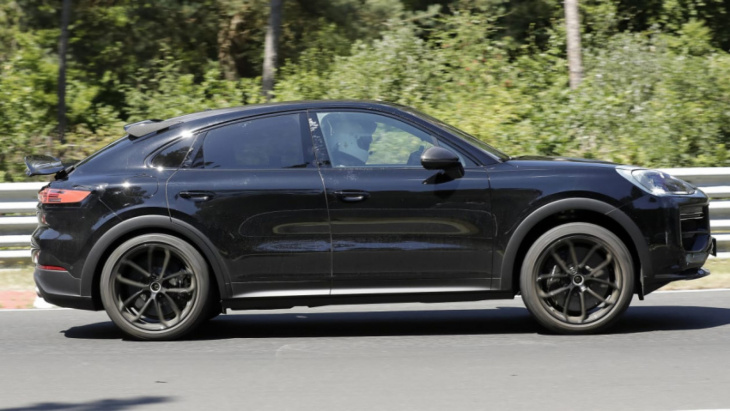 As the sportiest model in the Cayenne lineup, the Turbo GT should receive the same 4.0-litre V8 engine as the previous model. The outgoing Turbo GT offers up 631bhp and 850Nm of torque and coupled with four-wheel drive it can go from 0-60mph in 3.1 seconds – maxing out at 186mph. Expect the new model to make slight improvements in all areas.

We’ve previously spotted the facelifted Porsche Cayenne testing in range-topping Turbo S E-Hybrid trim, given away by the enormous 10-piston brake calipers painted in Acid Green. Then came what looked like the lower-spec S models and now these pre-production cars seem to be the non-hybridised Turbo models, given away by the quad exhaust setup. These latest images show an older design of wheel but previous cars have sported a new multi-spoke alloy wheel design that will arrive as part of the facelift.

As the most powerful SUV in Porsche’s line-up, the facelifted Cayenne Turbo S E-Hybrid will use a 4.0-litre twin-turbocharged V8 engine combined with an electric motor. In the outgoing model, this unit produces 671bhp and 770Nm of torque, but the revised car is likely to borrow the upgraded version of this powertrain as fitted to the latest Panamera Turbo S E-Hybrid, which sees a boost to 690bhp.

Under the skin, the facelifted Cayenne will utilise the same MLB platform as the outgoing car, albeit with a few tweaks. Porsche’s engineers are likely to retune the suspension settings to improve ride and handling, and the existing engines could be updated to provide improved performance and efficiency.

However, there are more notable changes inside. Photographs of the interior reveal a revised centre console, which has been simplified with a single row of toggle switches and a large volume dial. A pair of USB Type-C sockets can be seen below these controls, too.

In previous test cars we’ve seen the large, pistol-like gear selector of the current car has been swapped for the short, stubby item found in the latest 911. The steering wheel will also be borrowed from Porsche’s sports car. 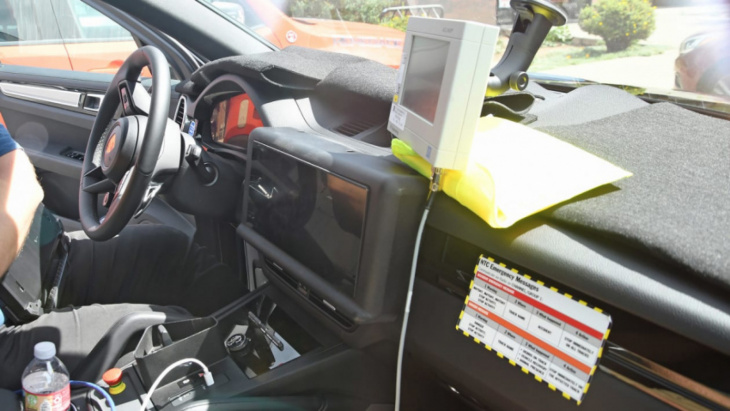 As with the current model, the facelifted Cayenne will utilise Porsche’s PCM 6.0 infotainment setup, which is controlled through a 12.3-inch touchscreen. The system features connected intelligent satellite navigation, ‘natural’ voice control, Android Auto and Apple CarPlay.

We expect the Cayenne to be revealed early next year, alongside a revised Cayenne Coupe.

Now read our full review of the Porsche Macan T…

Three friends on quest for adventure with Porsche Cayenne

Follow 3 Friends On Their Adventures With The Porsche Cayenne