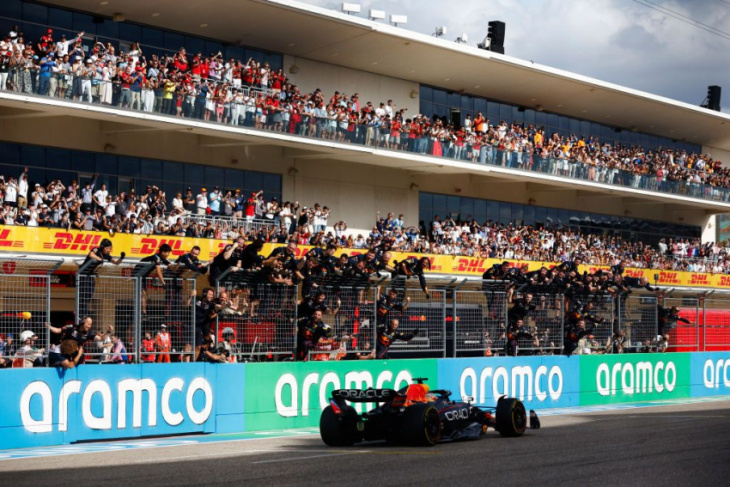 Red Bull Racing are World Champions for the first time in nine years after Max Verstappen’s emotional triumph at the United States Grand Prix on Sunday at Circuit of the Americas just outside of Austin, Texas. The run ends eight consecutive Constructors’ Championships (2014-2021) for Mercedes.

Autoweek breaks down some of the main talking points from the Circuit of the Americas. 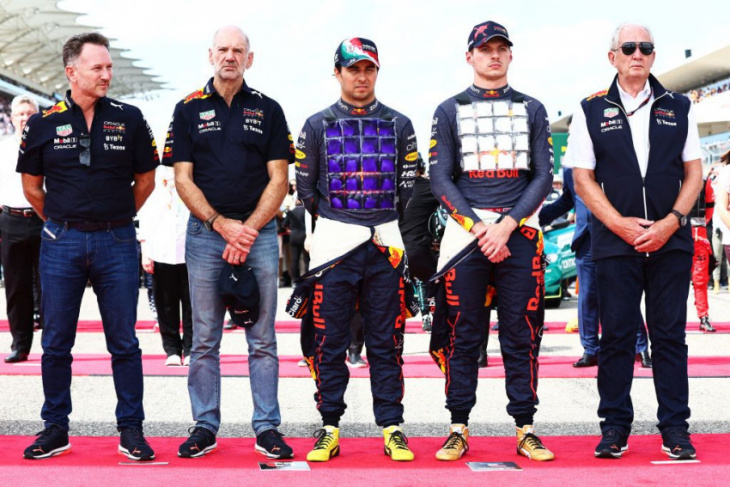 It has been a certainty for several Grands Prix, but Red Bull mathematically clinched the Formula 1 Constructors’ Championship in Austin, ending Mercedes’ record streak of eight in a row.

The title is Red Bull’s fifth overall since its inception in 2005, its first since 2013, and comes in the first year of existence of Red Bull Powertrains, the division that was formed in the aftermath of Honda’s official exit.

It was a fitting way for the team to pay tribute to Red Bull co-founder and team owner Dietrich Mateschitz, whose death was announced shortly before qualifying on Saturday afternoon. There was a commemoration on the grid, with a moment of applause, and all eight current F1 drivers currently or previously affiliated with Red Bull stood together.

“It’s been a hugely emotional weekend,” said Red Bull team principal Christian Horner. “He was such a giant of a man and has done so much, not just for Red Bull Racing but for Formula 1, and so we felt determined to go out and really honor him in a way that would make him proud.

“There was no black armbands, no minute silence, it was the embodiment of celebrating him and the best way to do that was the performance on circuit. After eight long years we’ve never stopped believing, we’ve never stopped picking ourselves up, brushing ourselves down, and never lost sight of what our goals and objectives are, which is to get on top of both world championships. And we’ve done that. That’s a testament to our staff, suppliers, partners, and just the spirit that he embodied that runs throughout all of Red Bull that has enabled us to achieve what many people would have thought had been impossible.” 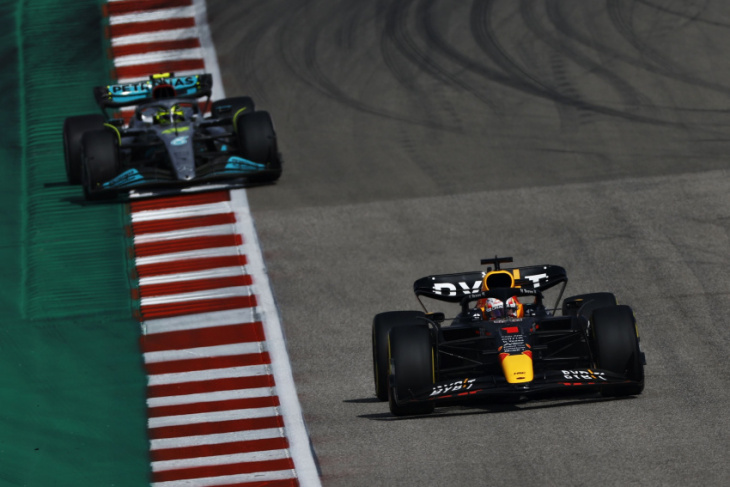 Max Verstappen pulls away from Lewis Hamilton after passing on Lap 50 of the 56-lap U.S. Grand Prix.

Max Verstappen showed no signs of slowing down after winning his second world title last time out as he cruised to a record-equalling victory at the Circuit of the Americas.

After last year’s close fight with then title rival Lewis Hamilton at COTA, Verstappen had to battle in windy conditions on Sunday afternoon. Having taken the lead off the line Verstappen controlled proceedings but dropped to third through the second pit stop cycle after a slow wheel change. He overhauled Ferrari rival Charles Leclerc before hunting down leader Hamilton through the final stages of the race, making a move into Turn 12 from which Hamilton could not retaliate.

Verstappen went on to pick up win No. 13 of the year, equalling the record of Michael Schumacher (2004) and Sebastian Vettel (2011).

“I mean obviously for us it has been a tough weekend,” said Verstappen. “And we really wanted to win today. It was looking great, then with that stop it was not the best! So we had to recover quite a bit and of course had a good battle with Charles, then it was about not damaging the tires too much, so I was not really catching like I wanted to towards Lewis but once I recovered the tire I could close it a bit step by step, then of course went for the move.

“I’m extremely happy to win in this difficult weekend for us. It was a race he’d (Mateschitz) have loved to see. I’m sad, but also incredibly proud of the way the team has performed. The people, the effort they have put into the car, has been enormous.” 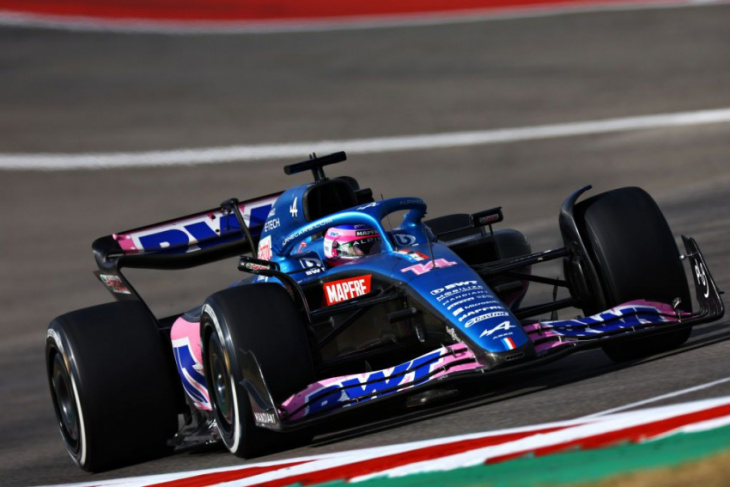 Fernando Alonso had an up-and-down race at COTA.

Fernando Alonso came perilously close to a terrifying accident yet not only continued in the race but finished in seventh place. 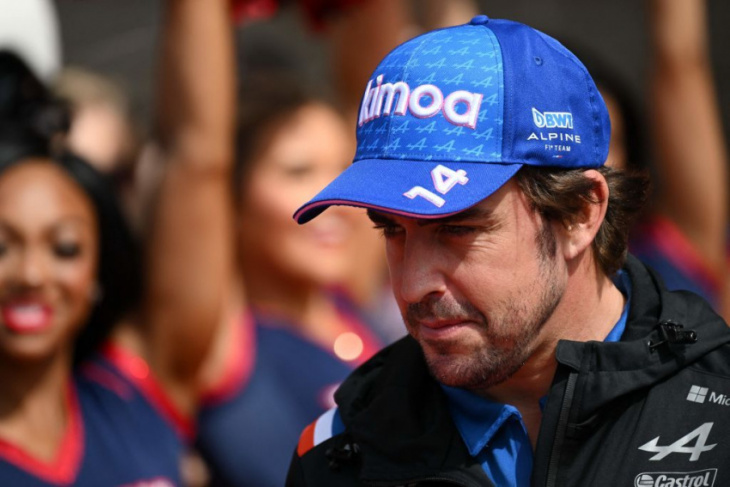 Alonso attempted to pass future teammate Lance Stroll along the back straight but was sent airborne when the Aston Martin driver moved left. As Stroll had a large accident, and was fortunate to escape unharmed, Alonso’s Alpine tilted skywards before coming down to earth just before the barriers, which he swiped at speed, though miraculously sustained only minor damage.

Alonso re-joined down the order but worked his way through the midfield pack to pick up seventh place, boosting Alpine’s prospects of fourth in the championship.

Stroll was ultimately deemed responsible for the incident and will take a three-place grid penalty into the upcoming round in Mexico City.

“There was a big difference in speed and I was defending,” said Stroll. “I gave him plenty of room on the left of the track, so it was not as if I squeezed him against the wall. He could have moved earlier or moved more to the left. Thankfully, it was not a big impact with the wall, I did not hit anything hard, and I am OK after the contact.” 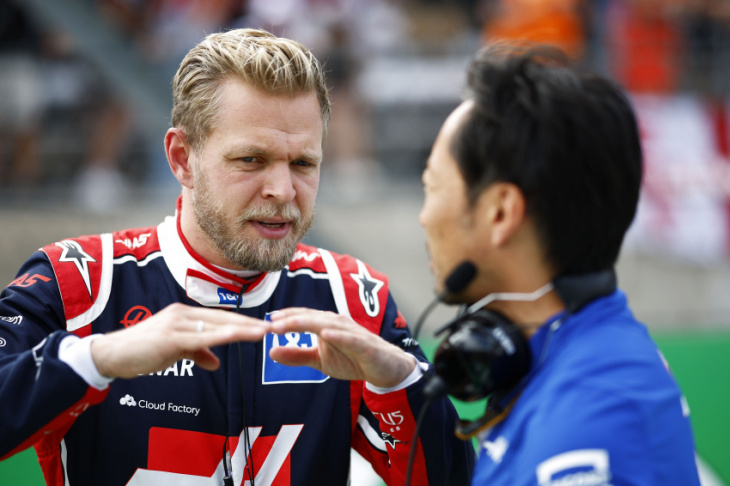 Haas had been on a dismal run of results in the build-up to its home event but was confident of a stronger performance, as it chased points in the US for the first time since 2016.

A double Q1 knockout did not augur well for its prospects but it started both drivers on hard tires and was handed a slice of luck when the pair were able to minimize time loss by pitting behind the Safety Car. Kevin Magnussen preserved his medium tires through the second half of the race to finish ninth, having run as high as sixth, which included a brilliant final lap scrap against Sebastian Vettel.

It marked Haas’ first top-10 finish since the Austrian GP back in July and gives the team a slender one-point buffer over AlphaTauri in the battle for eighth in the Constructors’ Championship.

“I’m super happy,” said Magnussen. “For us as a team, it’s very important to get these points at our home race in the U.S.—and it’s very big on the weekend that we announce a great title sponsor with MoneyGram—it couldn’t come at a better time. As such a small team to put on a fight like this, it’s great.”

Mick Schumacher picked up damage, thought to have been caused by debris from the Stroll/Alonso accident, that robbed him of downforce and hobbled his prospects. 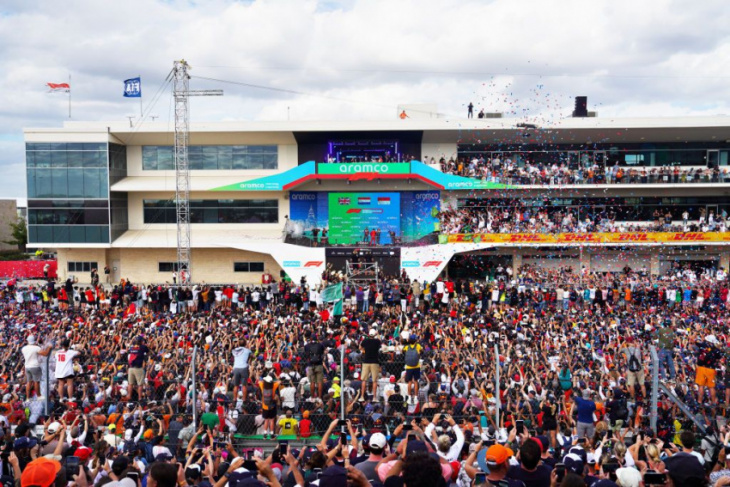 The Circuit of Americas announced a three-day track record weekend attendance of 440,000 specators.

Last year’s U.S. Grand Prix featured a crowd of 400,000, post-pandemic and post-Drive to Survive boom, so could that interest be maintained? Absolutely.

The Circuit of the Americas welcomed 440,000 spectators across the course of the four days and there is no doubt that interest and engagement in Formula 1 continues to grow in the United States. The introduction of the Miami round, and impending debut next November of Las Vegas, has enhanced rather than damaged Austin’s event, which remains distinctly for the hardcore race fan.