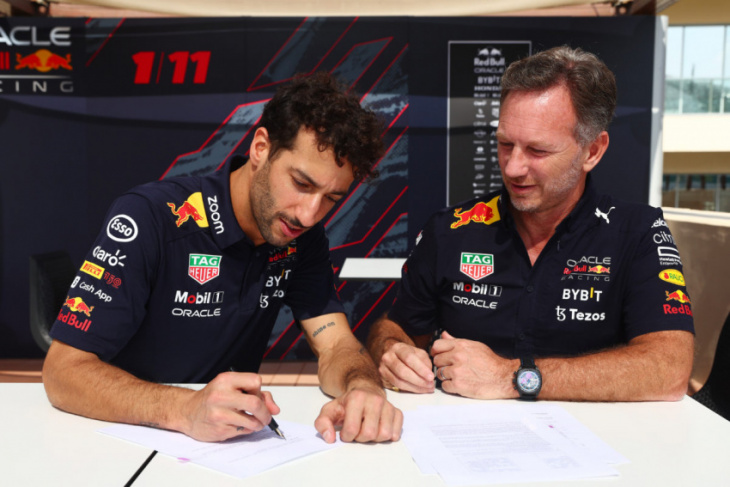 Daniel Ricciardo has explained why he signed on with Red Bull as Third Driver as Speedcafe.com secured the only interview with the Australian about the deal.

Ricciardo will rejoin the Milton Keynes team next year in a role that will see him support Max Verstappen and Sergio Perez.

However, he stresses it is not a race role, with Liam Lawson understood to remain in place as Reserve Driver.

“To make things crystal clear, I’m still not on the grid next year,” Ricciardo confirmed of his Third Driver deal.

“But look, it’s certainly a way to still stay involved and to give me the time necessary to take a back step.

“And that’s been no secret to myself.

“As the second half of the season went on, I just needed to step away for a bit, rebuild myself, reset a bit, and also just find the intense love for it.

“Because, at this level, if you don’t have that, then I’m not doing justice for myself or anyone around me.

“Obviously a race drive is the best thing if I want to stay, you know, that’s the surest thing,” he added.

“It just became more and more clear that I couldn’t be doing 24 races next year – it just wasn’t going to, I think, be the right thing for me.

“I think it would have just probably worn me out more than anything and it’s at a point where I just felt a little exhausted, where I just needed to slow my year down.”

The life of a Formula 1 driver is not an easy one.

While from the outside it looks glamorous, and there are certainly the trappings of fame and fortune, it also includes significant graft.

International travel and marketing commitments are part and parcel of the role.

There are sponsorship appearances, photoshoots, interviews, television and radio appearances, and that’s before the driver even considers their own fitness regime – a point which is often the first cut because it’s difficult to go for a run while flying between countries.

“It’s a privilege but it is also demanding,” Ricciardo said of the lifestyle.

“Yes, we are really good at what we do, but we’re also still human and we still get tired, exhausted, fatigued.

“And at this level of sport, that is dangerous – you can’t be operating at 99 percent, even.

“So I really felt I was in fear of not being at my best if I did another year.

“Obviously there was talks with other teams and I was like ‘okay, if I’m not on the grid at least let me be aligned with a top team.’

“It’s nice to be in a winning environment, I think you learn a lot,” Ricciardo added of the deal.

“If there’s not a seat with them, potentially they can help find a seat elsewhere.

“Also, being linked with a top team, a bit like [Nyck] de Vries was with Mercedes, you’re living with a top team – I feel like you’re more, I don’t want to use the word relevance, but you’re kind of more recognised and less forgotten.

That realisation is why Ricciardo is looking for time away to reset and reignite the fire after a trying period.

And that stems from more than just the challenges he’s faced at McLaren.

During the COVID-19 pandemic, when the world largely shut down, Ricciardo found himself more isolated than he’d ever been.

He missed family and friends. He lacked the support network he’d built around himself, while the separation thrust the importance of those things to the forefront of his mind.

It’s why, for Ricciardo, a Third Driver arrangement, without the extensive travel requirements, is ideal.

“Definitely,” he agreed when Speedcafe.com put that to him.

“Especially when you get to the top of your sport, you want to think that you’re awesome, invincible, just something really, really special.

“But I think the fact is that at some level, we’re all still human and we all still feel a little bit of pain or sadness, or whatever it is – emotion.

“I certainly felt these things the last couple of years, going through the highs and lows, and then with COVID, not seeing friends and family as often.

“So it all kind of just builds up to a point where I was like ‘okay, maybe it’s best to just get a few things back in my life’ – bit more family time, bit more friends, and a bit more time for myself as well.”

Striking a balance between Red Bull’s requirements and those of Ricciardo in settling on the Third Driver agreement was therefore important.

“I’m not going to do every race,” he confirmed.

“I still want that time to myself, but I will still be at some races, do some sim, listen and try to lend my experience and stuff and if I can help, sure, that’s a great thing.

“If I can do any form of testing, that would be nice just to stay also car-fit.

“So it’s kind of just being in enough where I’m still keeping up to date, so to speak, but then this is enough removed where it does give me that break.

“And I’m sure when I’m at the races watching I’ll be envious I’m not on the track, so these things will probably feed me in a good way.”