Tesla owners who have a CCS Combo 1 Adapter stand to benefit from the new EVgo charging plan. 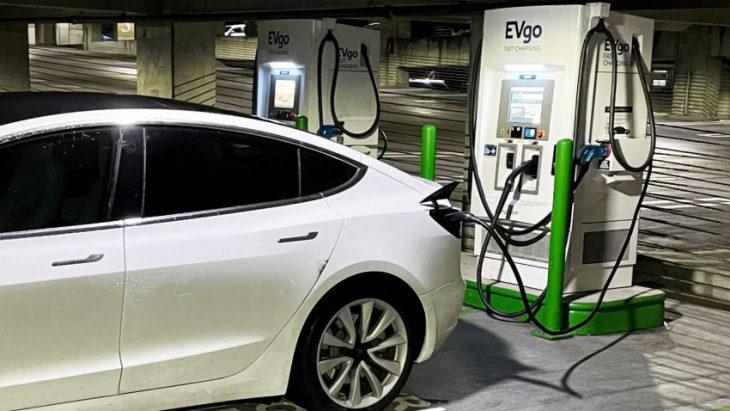 According to a recent report by Teslarati, EVgo launched its new “Tesla Plus Promo.” Essentially, the exclusive, promotional charging plan will ensure that Tesla owners can charge at all EVgo stations. Moreover, the “Plus” part of the program provides an additional perk for Tesla owners, but only if they have access to, and utilize the CCS Combo 1 Adapter.

EVgo notes that every Tesla owner will automatically qualify for the new plan, and it’s simple to sign up via the charging network’s official smartphone app. After signing up, Tesla owners will begin with a free trial that lasts three months.

The trial simply mirrors EVgo’s current subscription model, affording subscribers with discounted rates and the ability to reserve a charging station for free. It doesn’t matter if you’re already an EVgo subscriber, since the Tesla Plus Promo is available to new and existing customers through the end of 2022.

The arguably more interesting part here is that Tesla owners who use the relatively new CCS Combo 1 Adapter are also able to sign up for EVgo’s Autocharge+ program. With Autocharge+, you can get a seamless charging experience that includes automatic session starting, as well as automatic billing. This perk may work to convince Tesla owners to sign up and use the EVgo network in addition to the Supercharger network since it takes the potential hassle out of the situation.

One of the goals of the EVgo program is to save Tesla owners some 20 percent for powerful DC Fast Charging. The program doesn’t include any session fees, and the usual $6.99 per month fee is waived during the three-month trial period. Simply download EVgo’s smartphone app and add your Tesla under “Vehicle.” Choose the Tesla Plus Promo plan for enrollment, and you’ll be on your way.

With the aforementioned adapter, Tesla’s vehicles can charge at speeds of up to 250 kW. EVgo CEO Cathy Zoi shared via Teslarati:

“EVgo launched Autocharge+ to give EV drivers a simple and seamless charging experience at our DC fast charging locations. Combining the innovations of Autocharge+ with the release of the CCS Combo 1 Adapter and our new promotional charging plan, Tesla drivers can take advantage of high-power charging on the EVgo network in convenient locations across the U.S.”

Tesla has noted in the past that many public DC Fast Charing networks don’t allow its vehicles to charge at the quickest speeds. Moreover, there are usually membership fees and other charges. This new EVgo promo program could be the exception that convinces more Tesla owners to consider branching out from the Tesla Supercharger network.