Everything that happened in first Belgian GP F1 practice

Carlos Sainz led a Ferrari one-two in the opening Formula 1 practice session at the Belgian Grand Prix as a late-session downpour prevented improvements.

Sainz topped FP1 on a 1m46.538s at the beginning of a weekend where he has an excellent chance of victory as his team-mate Charles Leclerc and points leader Max Verstappen both have back-of-the-grid penalties.

His best effort was 0.069 seconds faster than Leclerc’s time and put him 0.217s ahead of third-fastest Verstappen.

None of those lead times are particularly representative because the session was red-flagged when Kevin Magnussen’s Haas broke down on the exit of the reprofiled Turn 1.

This caused a lengthy stoppage while Magnussen’s mechanics ensured the car was safe after his car’s red ERS warning light came on.

Magnussen has a problem and is stationary out on track just after Turn 1 #BelgianGP #F1 pic.twitter.com/0LTZ5QXoFz

The session resumed with nine minutes remaining but any chance of drivers bettering their laps was ruined by a late-session downpour.

This left Sainz as the fastest driver ahead of Leclerc, Verstappen, George Russell and Lance Stroll in the Aston Martin, who is trialling a new front wing. 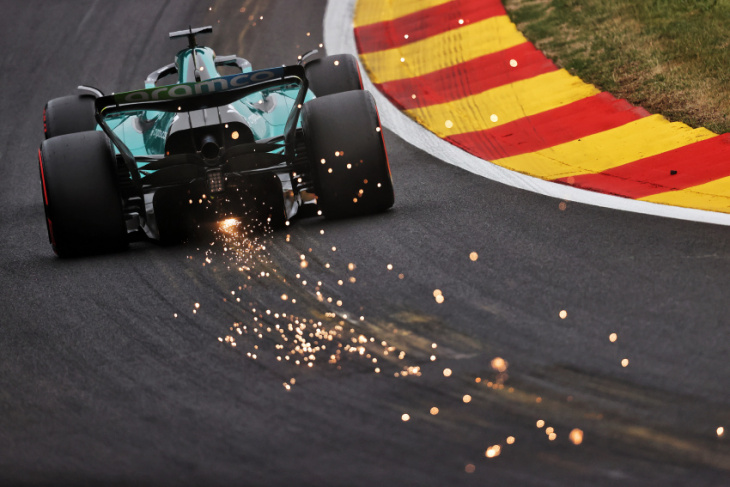 Alex Albon was an impressive sixth for Williams ahead of Daniel Ricciardo, driving in his first session since he announced that he’ll leave McLaren at the end of the 2022 season.

AlphaTauri’s Yuki Tsunoda was eighth fastest ahead of seven-time champion Lewis Hamilton and the second Red Bull of Sergio Perez, who will be expected to lead the team’s charge this weekend.

Nicholas Latifi was 11th fastest in the second Williams ahead of Zhou Guanyu.

Ricciardo’s team-mate Lando Norris will also take a back-of-the-grid penalty. He was 13th in the upgraded McLaren ahead of multiple world champions Fernando Alonso and Sebastian Vettel.

Esteban Ocon, Mick Schumacher and Valtteri Bottas will also start towards the back with penalties.

Ocon and Bottas were both limited in FP1 by mechanical problems, with the latter failing to set a representative time.

Three-time Formula 2 race winner Liam Lawson made his F1 practice bow for AlphaTauri in place of Pierre Gasly. He was the slowest driver to set a time, with his fastest effort over 3.7s adrift of the sister car of Tsunoda.

Keyword: Everything that happened in first Belgian GP F1 practice