Every Sport-Touring Bike You Can Buy Today 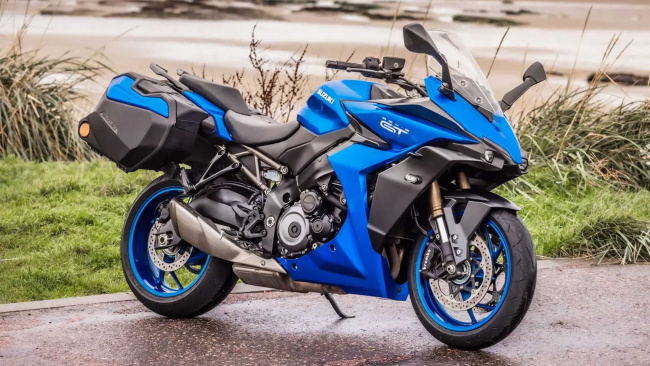 Motorcycling’s touring segment has evolved over the past decade. The conventional sport-touring recipe historically called for a proven sportbike platform equipped with a tall windscreen, relaxed ergos, and luggage options. With the explosive popularity of the ADV category, however, more and more manufacturers turned to adventure-touring models instead.

At the same time, the slumping sportbike class compelled brands to adapt to new consumer demands. These market forces formed today’s versatile sport-touring segment. From traditionalists to genre-benders, from upright seating positions to downright performance, the category is more diverse than ever. Here are the models that define the modern sport-tourer.

Revamped and rebranded for the 2022 model year, the Suzuki GSX-S1000GT+ sticks with the tried-and-true sport-touring formula. The Hamamatsu firm turns to its trusty GSX-R1000-derived K5 engine yet again, but the mill shines in tourer form with 150 horsepower peaking at 11,000 rpm and 78.2 lb-ft of torque topping out at 9,250 rpm.

Boasting side cases in standard form, the GT+ variant comes with 25.7 liters of storage capacity. The twin-spar frame and KYB suspension complement that practicality with performance over the long haul, while Suzuki’s Intelligent Ride System (S.I.R.S.) puts advanced riding aids at the user’s fingertips. At $14,099, the GSX-S1000GT+ remains one of the best bang-for-buck options on this list.

The all-new V100 Mandello represents the future of Moto Guzzi. The Itailian OEM’s first liquid-cooled engine impresses, with the DOHC, eight-valve, 1,042cc longitudinal V-twin producing 115 horsepower and 77.4 lb-ft of torque. The innovation doesn’t stop there either.

A slipper clutch, power modes, and IMU-governed cornering functions promote performance while cruise control and the Eco Riding indicator suit life on the open road. Thanks to its $13,199 sticker price, the Ninja 1000SX remains a legitimate contender among contemporary sport-tourers.

One such platform is KTM’s 1290 Super Duke GT. The supernaked-based tourer wears its sporty DNA on its sleeve. The angular bodywork not only captures the Super Duke’s aggressive attitude but also provides sufficient wind protection for extended road trips. A seven-inch TFT and turn-by-turn navigation only aid those endeavors.

Of course, the KTM’s 1,301 LC8 V-twin backs up the brand’s Ready to Race slogan with 172 horsepower. The Austrian marque tames that beast with WP semi-active suspension, ride modes, and lean-sensitive traction control and ABS.

The Aprilia Tuono V4 1100 went through an identity crisis in 2021. With the Factory trim carrying on the model’s sporty lineage, the Noale firm repositioned the base model as a sport-tourer. That transformation consisted of handlebar risers, a taller windscreen, and accessory luggage options. Sounds like a traditional recipe to us.

Still, the Tuono didn’t give up its fun-loving ways. Its 1,077cc V4 still produces 173 horsepower (at 11,350 rpm) and 89 lb-ft of torque (at 9,000 rpm), while the Aprilia Performance Ride Control (APRC) electronic suite retains track-oriented aids like launch control, pit limiter, and engine braking maps. Aprilia may list the Tuono as a sport-tourer, but it will always have its hypernaked tendencies.

While most of today’s sport-tourers call upon liter-sized mills, Yamaha’s Tracer 9 GT proudly champions the brand’s 889cc inline triple. The CP3 platform doesn’t disappoint either. Sure, the claimed 115 horsepower and 69 lb-ft of torque don’t overshadow its category rivals, but the proven powerplant provides more than enough pep for long-distance travelers.

A lightweight aluminum frame suspended by electronically-controlled KYB suspension strikes the ideal balance between stability and agility. At the same time, a six-axis IMU prioritizes safety. Retailing for $14,999, the Tracer 9 GT takes it to the competition, especially when LED cornering lights and side cases come standard.

The Bavarians shook up the superbike ranks with its S 1000 R and it set out to do the same with the S 1000 XR sport-tourer. For BMW, it’s about the journey, not the destination, and the travel-friendly XR keeps riders on their toes with its aluminum composite bridge frame and electronically-adjustable Dynamic ESA suspension.

At the heart of the XR beats BMW’s water-cooled, DOHC, sixteen-valve, 999cc inline-four engine. The wundermill cranks out 165 horsepower (at 11,000 rpm) and 84 lb-ft of torque (at 8,250 rpm). Traction control and ABS keep the XR in check while LED lighting and integrated pannier holders encourage open-road journeys.

Our final sport-touring entry contends the middleweight class, but MV Agusta’s Turismo Veloce holds its ground. Despite the model’s open ergonomics and upright seating position, the Turismo retains the Italian OEM’s sporty soul. That comes by way of the same 798cc inline-four that powers MV’s Brutale, Dragster, and F3 platforms.

In the sport-tourer, the flexible triple manages 110 horsepower and 59 lb-ft of torque. Even with the Veloce’s middleweight classification, MV arms the model with touring-oriented features like heated grips, Bluetooth connectivity (w. MV Ride App), cruise control, GPS sensor, a center stand, and an adjustable windshield. It’s this unique blend of pragmatism and punch that characterizes today’s sport-touring segment.

Keyword: Every Sport-Touring Bike You Can Buy Today