English Romps From 18th At Davenport 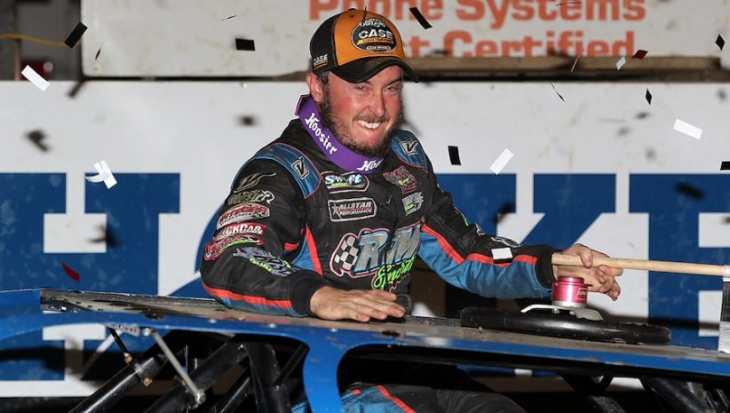 All he needed was a .235-second lead at the finish line Friday night to claim his first World of Outlaws CASE Construction Equipment Late Model Series win during night two of the Quad Cities 150 at Davenport Speedway.

His journey getting there was no easy climb, though. Race after race this season he inched closer and closer to his first series win, but a win seemed almost out of the question Friday night, having to transfer out of the Last Chance Showdown and then come from 18th in the 40-lap sprint around the quarter-mile track.

“This is big, this is huge for our team,” English said. “This will get the momentum rolling. You know when you win one it feels like it’s a little easier after that. So, it’s been a long time coming.”

The Benton, Ky., driver needed all 40 laps around the Iowa track as he sliced his way from 18th to first around the bottom, passing Bobby Pierce in the last corner to win by a nose.

English’s ascension toward the front of the field started slowly as he worked his way to eighth in the race’s first 25 laps. However, a caution with 15 laps to go set the stage for the epic finale.

He thundered to the bottom on the restart, picking off five cars in one lap to get to third — his eyes squarely on Pierce and Devin Moran as they waged war for the lead.

English inched closer until he caught the lead duo with two laps left. That’s when Pierce opened the door for the Series Rookie, who didn’t squander his opportunity.

The “Smooth Operator” moved to the top, trying to keep Moran from getting by. But it wasn’t only “The Mailman” lurking behind him.

English kept his Longhorn chassis locked to the bottom and pulled into a three-wide battle in traffic as they took the white flag — none of them yielding an inch.

Pierce and English stormed away from Moran on the backstretch, leaving the two drivers to fight for the win in the final two corners.

They raced side-by-side through turns three and four, but English found the boost he needed to cross the finish line first, a triumphant victory that had the entire Davenport Speedway crowd standing and cheering.

English said he was worried his opportunity might not come, knowing how good Pierce can be running the top.

“When Bobby got to Trevor {Gundaker, a lap car], and he had to move, I was a little scared because he’s always better on the top, so I figured he’s just going to pull away,” English said. “He got off that bottom there, and it doesn’t matter how far ahead somebody is. If they’re running the bottom, it dirties the air up.

“So, when he went to the top, I think I had just enough gap between me and Trevor that I had clean air, and that car stuck the best it stuck all night. I made two perfect corners, and then next thing you know, I’m pulling up beside him.”

English’s $10,000 triumph also helped him cut into Dennis Erb Jr.’s lead in the battle for the 2022 championship. Erb now leads English by 136 points after a sixth-place finish Friday night. English also extended his lead to 58 points in the Rookie of the Year race over Max Blair, who finished fourth.

Pierce came less than a car-length short of reaching victory lane for the second consecutive night.

“I didn’t even know Tanner was in the picture,” Pierce said. “It was an exciting race, but unfortunately, we were just the second-place car. I was having a hard time holding off Devin (Moran) because he was a little better. I felt like toward the end of the race. Tanner obviously was the best car at the end of the race.”

“It’s just the way it goes,” Moran said. “I felt like we had a really good car, and I could run that middle-top. I just got caught up with Bobby and just let Tanner go by.

“It was just one of them deals. I need to get my race car a little better so I can get by him and don’t have to worry about that.”