Tesla CEO Elon Musk said the Cybertruck will cross rivers, lakes, and seas “that aren’t too choppy,” because it will be waterproof enough to “serve briefly as a boat.”

The Cybertruck was unveiled in late 2019 and was set for production and deliveries in late 2020. It has been delayed on several occasions by Tesla due to parts constraints and a lack of production space. However, with Gigafactory Texas complete and a rumored Cybertruck-specific Giga Press from IDRA installed at the plant, production might actually begin early next year as the company plans.

However, in the three years since the unveiling, Musk has hinted the Cybertruck would have near-limitless abilities. The most recent is nearly a reiteration of previous predictions from fans, as Musk said the Cybertruck would need to be able to scale the 6.5-mile float from Starbase to South Padre Island for SpaceX-related logistics activities.

Needs be able to get from Starbase to South Padre Island, which requires crossing the channel

Musk knows this would require crossing the Brazos Santiago Pass, which would likely be the toughest challenge of the entire trip. 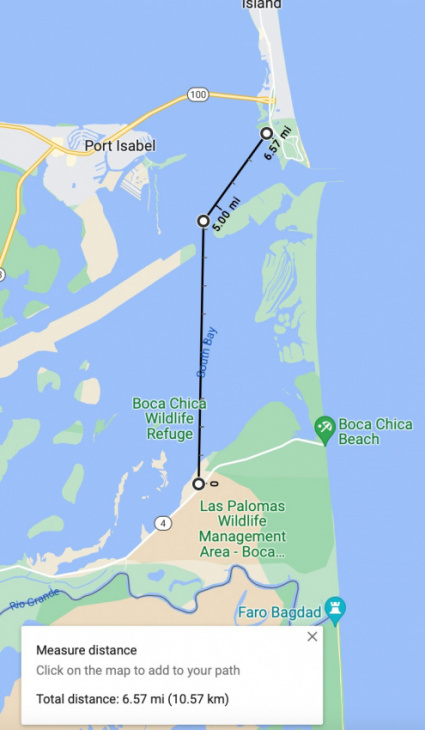 The Cybertruck as a boat would likely travel between 5 and 10 knots, which would make the trip somewhere around 51 minutes on average, depending on conditions. Regular boats with small propellers travel between 10 to 15 knots on average.

Interestingly, this is only a minute faster than just driving the fastest route, which takes just 52 minutes. However, Musk did not disclose any indication of how the Cybertruck would be propelled, nor did he give any estimates as to what speed he would expect it to travel.

Tesla still has yet to bring the Cybertruck to production, despite it having its design finalized, which occurred earlier this year. The company still plans to launch production at Gigafactory Texas in 2023, as parts shortages and general supply chain constraints limited the company to halt the potential release of new products this year.

Musk has also stated that production will start with a previously-unreleased Quad-Motor version of the Cybertruck, which packs one additional motor than the previous top trim level, the Tri-Motor.