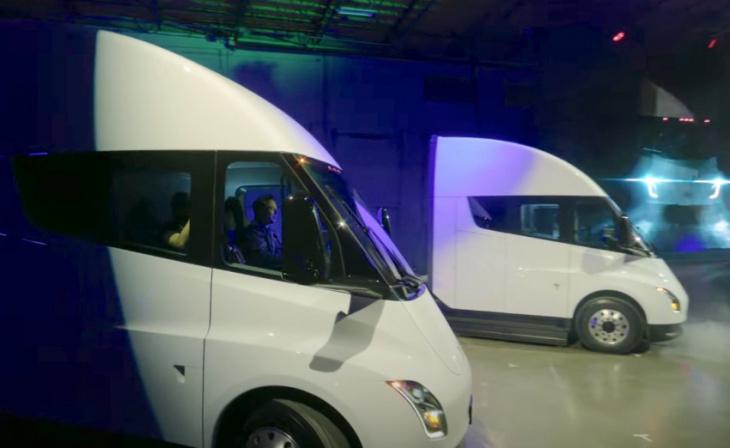 He’s a busy man, Elon Musk. Fresh from causing chaos at his newly acquired Twitter outfit, and just hours after offering an update on his neuroscience Neuralink venture, the billionaire entrepreneur drove Tesla’s first Semi production vehicle to a delivery event at the automaker’s Nevada Gigafactory on Thursday night.

Tesla unveiled the all-electric Semi to great fanfare five years ago, but production dates slipped, leading to a launch date later than it would’ve liked.

Initial customer Pepsi has ordered 100 Tesla Semis, with more firms expected to receive the vehicle once production ramps up. Tesla chief Musk has said previously that he expects to see as many as 50,000 Semis rolling off the line in 2024.

Semi is built like a bullet, not a barn wall—optimized for efficiency pic.twitter.com/VeHue9gcaE

The new truck comes in two variants — a 500-mile-range model costing $180,000, and a 300-mile-range model with a $150,000 price tag. A bunch of rival automakers are also in the process of bringing all-electric Semis to the market, though Tesla’s pricier model appears to have the best range among them by some margin.

Tesla’s Semi features a sleek look and can hit 60 miles per hour in 20 seconds when loaded to its 80,000-pound maximum gross vehicle weight. It incorporates four independent motors for maximum power and acceleration, giving it low per-mile energy costs.

“Charging with electricity is approximately 2.5 times cheaper per mile than refueling with diesel [based on average diesel prices in California in the first half of 2022],” Tesla says on its website. “Operators can see estimated fuel savings of up to $200,000 within their first three years of ownership.”

During Thursday’s event, Musk highlighted just how environmentally toxic regular Semi trucks can be, explaining that while the large-size truck accounts for only 1% of vehicle production, it causes 20% of vehicle emissions, and over a third of all the particulate emissions.

“From a health standpoint, particularly in cities, this is a huge impact … that’s why we’re doing it,” Musk said.

Gazing at the Tesla Semi beside him, Musk added: “There’s a big shortage of drivers, and so if you’re a truck driver and you want the most bad-ass rig on the road, this is it.”