Elon Musk calls out Twitter for suppressing his tweets

Elon Musk spoke out against Twitter’s suppression of his tweets today. He asked Twitter, its CEO, Parag Agrawal, and the official account for Twitter Verified to solve the issue. Usually, his tweets generate thousands of replies, likes, and shares or retweets.

Although his tweet calling out Twitter received over 35,000 likes alone, some of his other Tweets today didn’t receive so much traction which is odd for an account with over 100 million followers. Some of his emoji or punctuation responses have generated more engagement than some of his tweets today have.

One example of a tweet that is not so visible is Elon’s reply to Andrea Stroppa, who recently lost his verification status after taking measures to protect his account from hacked verified accounts promoting crypto scams.

The Twitter thread by Andrea that Elon replied to was focused on sharing what Peiter Zatko confirmed in front of the U.S. Senate Judiciary Committee. Just to show a comparison, below is a screenshot of a reply from Elon Musk to me.

In July, Elon Musk responded to my tweet saying that Teslas are the most made-in-USA vehicle. That response received over 45,000 likes and over 3,000 shares as well as several replies. 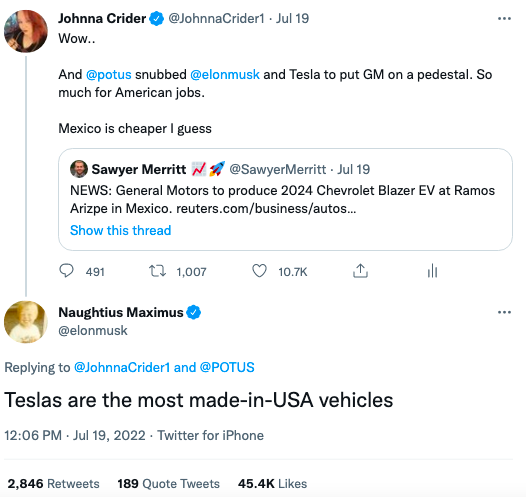 Although the two topics were vastly different and his response to me generated media headlines claiming that he was attacking President Biden and General Motors, Elon’s recent interaction with Twitter is another important part of the problem between the two. With media outlets reporting on Elon’s every move and every detail of the legal battles between the two, it’s odd that his reply to Andrea has gone almost unnoticed.

Yet Elon’s comment on Andrea’s threat was strangely minimized. In fact, I have my notifications turned on for Elon’s tweets yet I rarely receive them. His response to Christina Farr about the fertility space only generated 485 likes. Again, this is strange for an account with over 100 million followers.

Elon Musk isn’t the only one noticing strange things on Twitter. I’ve seen my own tweets suppressed. I’ve had many of my followers tell me that they have to come to my profile just to see whether or not I’ve tweeted.

Several others have told me that the same is happening to them. Twitter, it seems, is suppressing many tweets pertaining to touchy topics such as Elon Musk and Twitter, as well as Ukraine, sexual abuse, and other topics.

Not only yours. My tweets regarding twіttеr or russіа's attack on Ukrаіne are also suppressed

Keyword: Elon Musk calls out Twitter for suppressing his tweets