The production vehicle will debut in 2023. 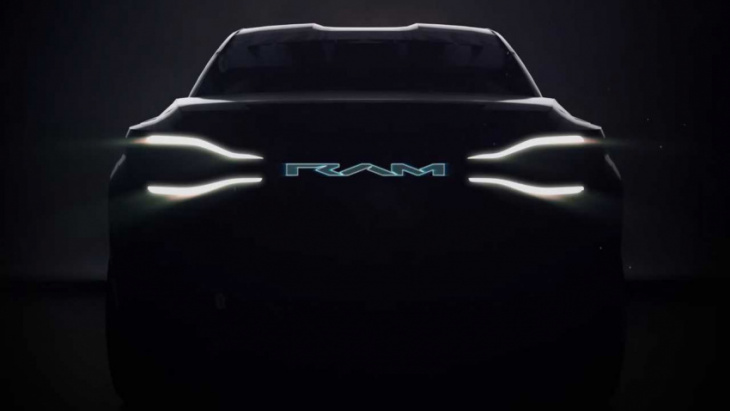 Ram’s electric pickup truck will enter production in 2024. But before that happens, Ram has to show off the concept. The big reveal will happen this November, the night before the LA Auto Show. The unnamed production version won’t debut until sometime next year.

We know very little about the vehicle, but Ram CEO Mike Koval Jr. told the Detroit Free Press that the truck would outperform its competitors in doing quintessential truck things like hauling and towing. Ram teased the EV earlier this year, writing in a tweet of the video that it was “Time to steal some thunder,” putting the Ford F-150 Lightning and Chevrolet Silverado EV on notice.

The new truck should ride on the STLA Frame platform that Stellantis is developing. The scalable architecture can offer up to 500 miles (805 kilometers) of range. We have no idea if the production version will offer anywhere close to that; however, we know that the STLA Frame platform can accommodate 200-kilowatt-hour batteries and larger. The platform will also underpin large SUVs and commercial vehicles.

The teasers have shown off a bold-looking truck with an illuminated grille badge, striking lighting elements front and rear, and a double-bubble roof. It’s too early to tell if these features will find their way onto the production version, and Ram has plenty of time to tweak the final design before it begins to roll off the assembly line in 2024.

Ram has plans to offer every model as an EV by 2030, but its lineup at the end of the decade could look different. Midsize trucks have resurged in popularity, and Ram could add such a model to its lineup. Koval told the Free Press that the segment is a big opportunity for the brand, and there have been countless rumors about the Dakota’s resurrection in the wake of the Ford Ranger returning to the US. Chevrolet, Toyota, and Nissan also compete in the space.

The Ram Revolution concept will be our first look at the brand’s electric pickup, and we’re excited for its arrival. Last year, the Chevy Silverado, Ram 1500, and Ford F-150 were the top three best-selling vehicles in the US, and electrifying each is a notable milestone.


View more: 5 Reasons You Should Consider a Ram 1500 Classic

The revelation that the scholarship prize fund for winning Indy Lights has been more than halved has far-reaching consequences – and not just for runaway 2022 champion Linus Lundqvist and his hopes of graduating to IndyCar. It’s also an unwelcome distraction at a time where Indy Lights, which from ...

Image: Riz Akhtar Tesla has begun production for the next round of Model Y deliveries to Australia, with order holders reporting progress over the weekend of their RWD orders. Many have been told that their orders are being brought forward after being advised of a “build date” of Friday ...


View more: RAM Concepts We Wish Were Made

With the continued roll-out of Gazoo Racing (GR) branded models, Toyota is establishing the “GR Pyramid” for its high-performance brand. “The GR product hierarchy comprises four levels; represented as a pyramid,” said Toyota. Each tier sees different enhancements including cosmetic, handling, and engine tweaks, though availability varies from region ...


View more: Toyota GR pyramid – Everything you need to know

Is the Ram 1500 eTorque a hybrid? Is Ram eTorque any good? How much does eTorque cost? There are multiple hybrid pickup trucks on the market, including Ford’s Maverick and PowerBoost F-150 as well as the Toyota Tundra with the new i-FORCE MAX V6. Ram has been offering its ...