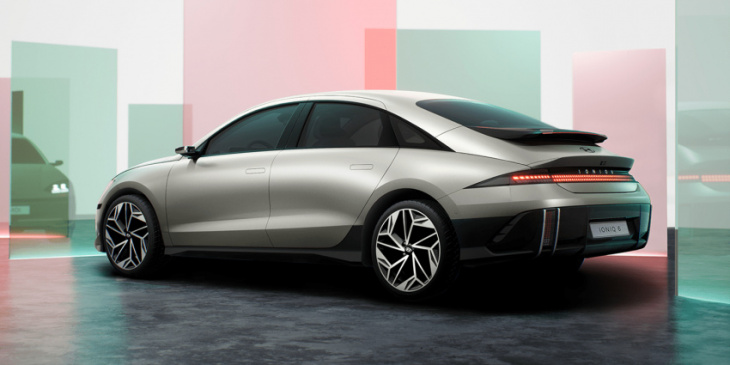 In Germany, eight charging stations and eight Hyundai Ioniq 5 have fed in secondary balancing power in the area under the auspices of transmission grid operator Amprion. The vehicle-to-grid (V2G) project illustrates how vehicle batteries can balance grids in the face of intermittent energy supply and demand. Amprion has also successfully placed its first Green Bond on the international capital market.

The V2G test with the eight Hyundai vehicles in the German region of Offenbach follows their successful prequalification by the transmission grid operator Amprion. The project is also intended to illustrate that small numbers of vehicles, and vehicle-to-grid technology can also make a significant contribution to the provision of balancing power.

The project was initiated by Hyundai, LG Electronics and Next Kraftwerke. The declared goal was to prequalify electric vehicles from Hyundai and provide secondary control power (SRL). Prequalification is the prerequisite for plants to be able to provide balancing power – in this case; charging stations and electric cars. The systems must prove their technical suitability, which Amprion has now succeeded in doing in the case of the Ioniq 5.

For the provision of secondary control power, the eight charging columns at the Hyundai site in Offenbach are combined in a sub-pool, which in turn is integrated into the Next Kraftwerke virtual power plant. LG Electronics has developed an app to forecast exactly when the vehicles will be at the charging station and are thus available for balancing power. Hyundai employees enter the charging times of the electric cars into this app. In addition, LG Electronics and Hyundai Motor Group have developed a cloud-based platform that pre-aggregates the facilities as a sub-pool and coordinates the provision of balancing power.

In order to test the secondary balancing power for possible use at private households in the future, wallboxes and a home storage system from LG are to supplement the sub-pool. The wallbox and home storage system have already proven their technical suitability for prequalification.

“The necessary and rapid expansion of renewables is accompanied by an increased demand for flexibility potential. As a transmission system operator, we are very interested in new approaches and technologies to be able to leverage these potentials. That’s why we are delighted with the success of the project as a positive example of intelligent sector coupling,” explains Markus Stobrawe, Head of Energy Market and System Balancing from Amprion.

An important finding from the project was that, based on the tested concept, it should be possible to integrate other locations and larger vehicle fleets into the pool.

The partners have not revealed whether there were any technical changes made to the Ioniq 5 cars used for the project. The onboard charger that Hyundai uses for its electric cars that are based on the E-GMP is V2X-capable, i.e. “Vehicle-to-Everything”, as already reported in 2020. So far, Hyundai has only used this technology for a so-called “vehicle-to-load” function: With V2L, an electrical device can be operated with up to 3.6 kW via a special adapter, just like at a socket. Hyundai already announced a number of vehicle-to-grid projects in April 2022, for which special software was developed for the onboard charger – the hardware corresponds to the series model. Project participants have not yet revealed whether this is also the case for the project in Offenbach.

At the same time as this successful V2G project and prequalification of Hyundai vehicles, Amprion has placed its first Green Bond on the international market. The 1.8 billion euro bond was issued within Aprion’s debt issuance and has now been oversubscribed several times.

The bonds are listed on the Euro MTF of the Luxembourg Stock Exchange. The dual-tranche bond has volumes of 800 million euros and 1 billion euros and has terms of five years and ten years, respectively.

This issuance should allow the transmission system operator to “drive forward the necessary transformation and expansion of the electricity grid and fulfil its legal mandate,” says the company.

Practically, I am seeing no difference between my VW Ameo DSL Auto and Tucson in terms of fuel consumption. BHPian KrishKallapur recently shared this with other enthusiasts. I am writing this update after 2 months of ownership and 1500 km. I bought a diesel 2WD Signature model, Amazon Grey. ...

The humble Hyundai EV overcame six-figure vehicles from Lucid, Cadillac, and Land Rover to win over our editors.

Hyundai Motor Corporation and SK On will build an electric vehicle battery facility in Bartow County in Northwestern Georgia, Governor Brian Kemp announced today. In late November, Hyundai and SK signed a memorandum of understanding (MOU) to solidify the companies’ intentions to build EV batteries together in Georgia. The ...

The factory's projected opening date is 2025.


View more: Hyundai And SK On Investing Up To $5 Billion For Battery Plant In Georgia

Electric Prices announced for Hyundai’s swoopy streamliner. AWD versions will be nearly £54k Hyundai UK has announced prices for the striking Ioniq 6, and interestingly it’ll cost just a couple of hundred pounds more than the equivalent Ioniq 5. So, here goes: the 6 only comes in big battery 77.4kWh ...

Hyundai, Kia and Genesis deliver a trio of variations of the same great electric car. Which is right for you?