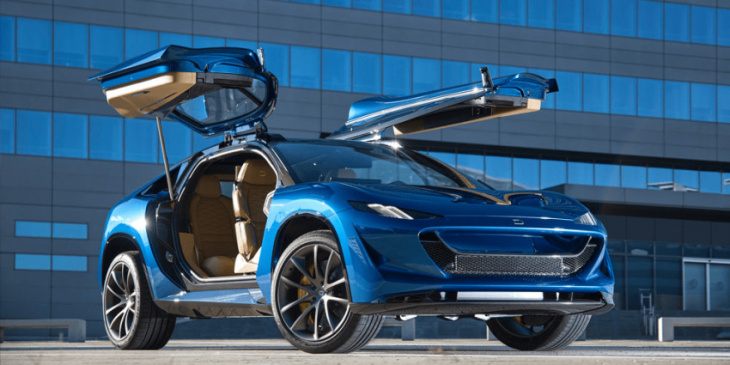 The Californian carmaker Drako Motors presented a nearly 1.5-megawatt electric SUV with gullwing doors at the LA Auto Show. But not only is the drive power enormous, the company also promises a high charging capacity.

Powered by four electric motors and with an estimated EPA range of 675 kilometres, the Drako Dragon is said to be able to sprint from a standstill to 60 mph in 1.9 seconds and be over 320 km/h fast. The powerful drive is said to be an in-house development called “Drako DriveOS Quad Motor Powertrain”.

However, Drako does not provide any further details about the battery – neither about the cell chemistry used nor the voltage level or the installed energy content. Since a similarly sized but significantly weaker Lotus Eletre with 112 kWh achieves 490 kilometres in the less demanding WLTP, the Dragon would have to be equipped with a much larger battery for 675 kilometres according to the EPA standard. Another comparative value: the much more aerodynamic Mercedes EQS 450+ comes to an EPA specification of 563 kilometres – with 107.8 kWh.

In the technical data, Drako somewhat cryptically states a “500 kW capability” for fast charging. This wording does not explicitly confirm whether the peak DC charging capacity is actually 500 kW. If the current 500 amperes are taken as the maximum charging current, the battery voltage should be 1,000 volts.

However, InsideEVs has learned that the Dragon can be charged to 80 per cent in just ten minutes. Even with a constant power of 500 kW, only 83 kWh would be transferred in ten minutes. If these 83 kWh correspond to the charging stroke from ten to 80 per cent, 100 per cent would be 118.5 kWh. Since a constant charging power of 500 kW is very unlikely, the battery is likely to be smaller. This in turn would mean that the efficiency of the drive is far above the current market standard – but a 1,500 kW SUV with an unladen weight of 2.3 tonnes is unlikely to be an efficiency miracle. So the information about the ten-minute charging time seems unlikely.

The base price for the electric hyper-SUV, which can be reserved now, is 290,000 US dollars. Drako Motors plans to produce 5,000 units of the Dragon per year. The company expects production and deliveries to begin in 2026. Let’s hope that these statements are more realistic than those about the EPA range or charging capacity.

The Lamborghini Huracan Sterrato was initially just a concept, which debuted in 2019. Lamborghini has finally launched its Huracan Sterrato off-roading supercar as a limited-run production model, years after its initial debut as a concept in 2019. There have been changes since, but the overall design and philosophy remains ...