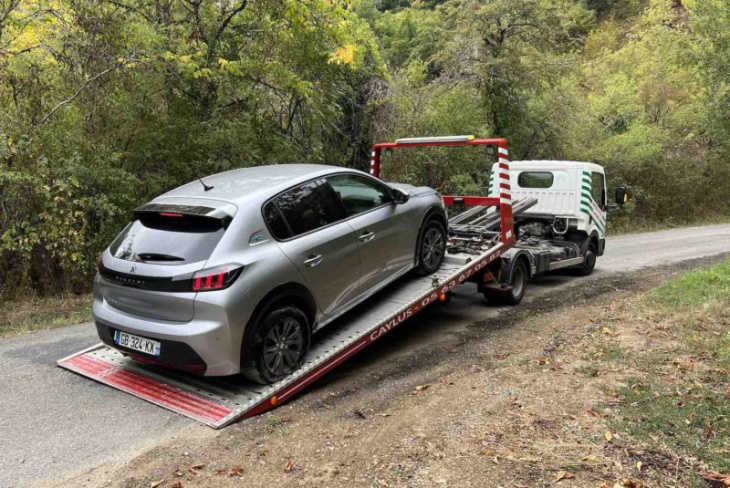 I should blame it on the weather. Or the weather man. We were travelling in the south-west of France, enjoying the pleasures of a rented electric Peugeot (e-208) and had spotted an interesting looking blues concert in a small community of St Michel de Vax.

To the disappointment of all who turned up, including us, it was cancelled at the last minute, due to forecast rain that never eventuated.

And that’s when we took the decision to go somewhere else, and to a series of events that led to being stranded on the side of a small road with a major puncture, with dusk falling and having left the paperwork (and emergency numbers) at the place we were staying.

Electric cars don’t come with spare tyres, not even rented ones, which leaves you vulnerable in situations like this. We walked the 2kms back to our lodgings in fading light, and try as we might when we did contact the rental company and their emergency responders, driving out and replacing the wheel wasn’t an option.

So a truck came to take the car away, and a day later, a taxi to take us back 100kms from the beautifully named (and beautifully sited) Saint Antonin Noble Val to Toulouse to pick up a replacement. Everyone was very nice about it, and were just following the rules, it appeared. But it seemed to like a monumental waste of everyone’s time.

Just as well, then, we had signed up for a character from the French Asterix cartoons, Assurancetourix, or full insurance cover. Always do it. (For Asterix afficianados, Assurancetourix is the French name for the bard known in English versions of the cartoon as Cacofonix or Malacoustix). 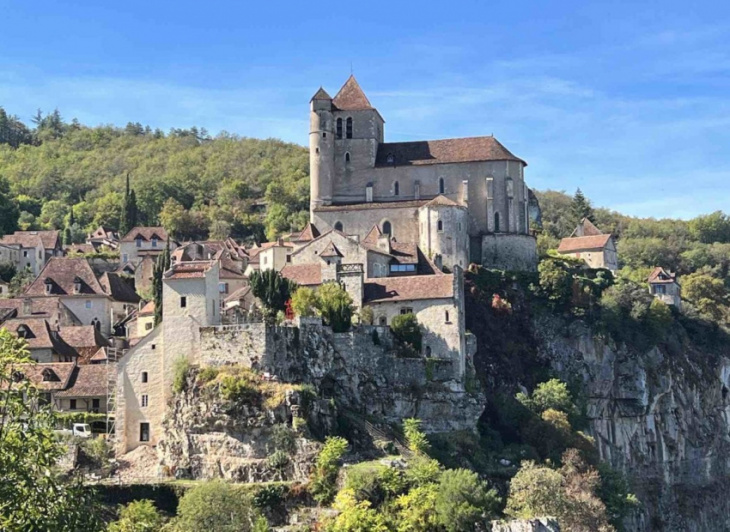 Anyone spot my mobile phone?

That, though, was the biggest and really the only sore point from our 10 days driving the electric Peugeot e-208 along the rivers and through the hills of south-west France, a beautiful region transversed by the Aveyron, Lot and Gascoyne rivers.

It was a last minute decision. Rome and Italy had beckoned after a brief stay in Germany but the flights and the accommodation were crazy expensive. So we chose a train to France (a story in itself about deteriorating German efficiency) and wondered how easy it would be to rent an EV in regional France at short notice. Not hard at all, it turned out.

We arrived at Toulouse by train, ducked round the corner to Sixt and found ourselves with the e-208. This was particularly interesting for me, as the car I had driven for more than a decade before going electric with a Tesla Model 3 had been a Peugeot 207, and the e-208 could be one of the first Peugeot electric offerings in Australia from some time in 2023.

My Sydney mechanic reckons the fossil fuelled 207 turbo was one of the best cars he had ever driven, and it’s true it had amazing torque and handling for what our Godson dubbed as “diesel boy.” But it did get old and cranky, and started to sound more and more like an angry tractor. And its insides melted in the Australian sun, although not as quickly as the Model 3.

So how different would an electric version of the 208, the successor to the 207, be to the driver? 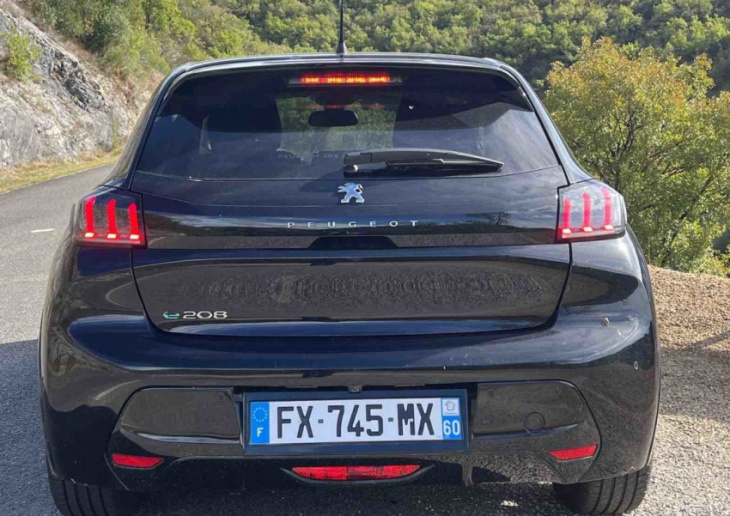 Well, from the outside, not a lot. Same body shape. And on the inside, not much change either. The dashboard and instrumentation have evolved in the decade since my 207 was made, but the e-208 is not a lot of different to the modern petrol version.

In “eco” and “normal” mode” it doesn’t really have the excitement that made the fossil fuel versions of the Peugeot 207 and 208 such coveted models, particularly in its home market, but in “sports” mode the -208 does have some fizz.

The thing is, we were on holiday, and in south-west France just about every corner you navigate presents another perfect vista. It’s best to take things slowly and enjoy the ride, and the view, and the peace and quiet.

What the electric Peugeot did offer was a small size, perfect for back roads and the sometimes scarily steep and narrow roads that lead to and from hilltop villages and fortified chateaus, and the quiet and relaxation to enjoy the calm and the view. And when it came to hit the auto-route, as we did on returning the car to the airport, it had no problem sitting at 130km/h.

Its basic stats are this: A 50kWh battery for a nominal range of around 330kms, but in reality probably about 20 per cent less. And it can get from 0-100km/h in about eight seconds, which is not bad.

Range was not an issue. We didn’t travel much more than 150kms in any one day, and – it turns out – in south-west France there are charging stations just about everywhere, and not too many other cars using them.

Most of them are not fast or super fast chargers, but AC charging that might offer between 10 and 20kWh and at reasonable rates (see above). 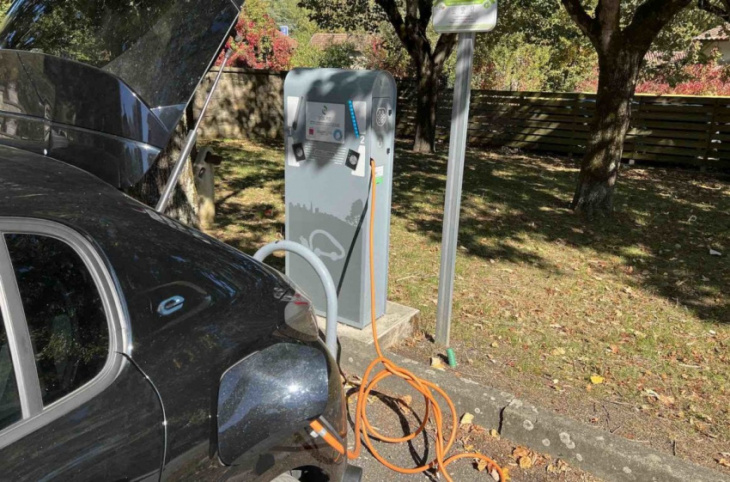 The slower charging was no problem. If you are up for a walk to the top of the castle, or stopping for lunch, it’s just very convenient (and it means the parking is free).

And if we were still low on charge when we got back, we just plugged it into the power point at our accommodation. (But there were also a couple of local charging options there too).

Sixt gave us a swipe card that was linked to our bank account, so there was no issues with downloading new apps each time you came across another charger. (That would have been hard anyway as my Iphone fell 110m off the top of one of those chateaus, at Bruniquel, never to be seen or heard again).

One thing we do know is that it saved us a lot of money. Petrol prices, like everywhere, are steep in France, at around 1.6 Euros a litre.  Electricity prices in France are heavily subsidised (at considerable cost to the government), so using electricity rather than liquid fuels is a major cost saving. 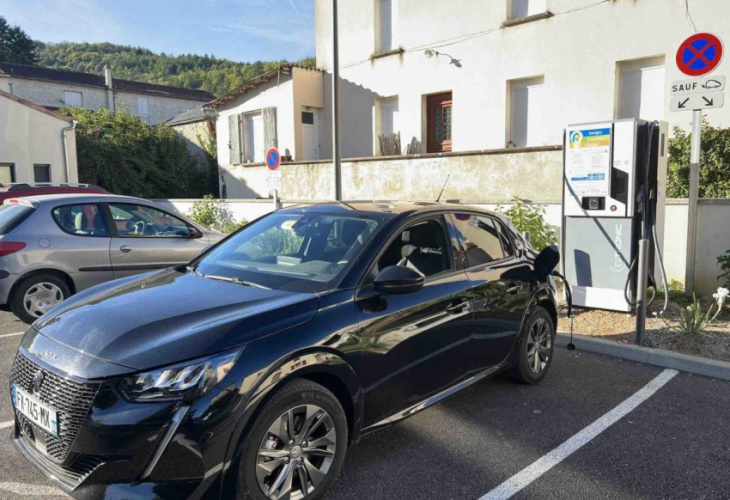 Our taxi driver, one of the first in the region to go with a Tesla Model 3, has done over 300,000kms in the three years he has had his car, and reckons that he is saving €1,000 a month on fuel costs, or a total of €36,000 – nearly the original cost of the vehicle. That’s about the same ratio of savings I calculate for my Tesla in Australia.

He was going to get a Mustang, but after a conversation with a friend, dug deeper into the issue and decided on a Tesla. He is negotiating its sale and about to buy a newer model, possibly a Y.

“Everyone thought I was crazy. They said ‘it’s too affluent’, but then they go spend just as much on a petrol or diesel car,” our taxi driver said. “It’s expensive, but not expensive, and I use auto-pilot a lot, and I still have all my points.”

(Note: The author paid the full cost of the car rental and charging).

Keyword: Douce France in an electric Peugeot: Just don’t get a puncture