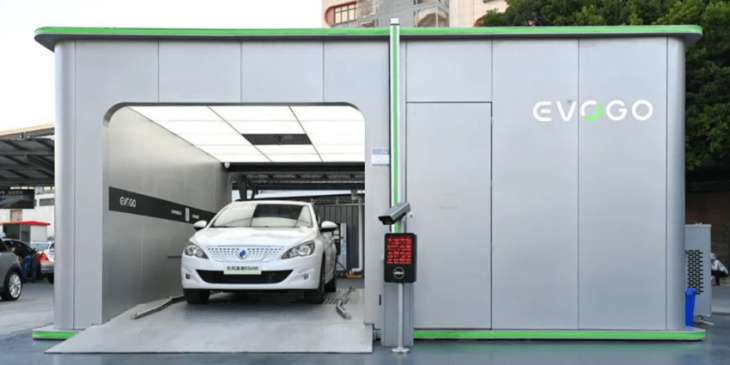 Specifically, a version of the Dongfeng Fukang ES600 sedan equipped for battery swapping will be offered next month, targeting the urban cab and ride-hailing market. The electric sedan is expected to have a range of 410 kilometres (presumably on the Chinese CLTC test cycle).

The Evogo system relies on unit batteries called ‘Choco-SEB’. SEB stands for Swapping Electric Block, and ‘Choco’ is intended to refer to the SEB’s appearance, which is somewhat reminiscent of a bar of chocolate. Thanks to CATL’s cell-to-pack technology, one of these blocks is said to enable a range of up to 200 kilometres – so the ES600 probably uses two of these ‘Choco-SEBs’ for a distance of 410 kilometres.

The Dongfeng Fukang ES600 is not a brand-new car: technically, it is based on the Peugeot 408, an internal combustion sedan that has been on sale in China since 2014 – the model is not to be confused with the new 408, which Peugeot has unveiled as a crossover sedan. Apart from a closed radiator grille (including a charging socket), the ES600 hardly differs from the old Peugeot model. Only under the hood is the drive technology new.

A battery swap is said to take only three minutes. As a CATL-internal source indicated to the portal Yicai Global, final tests are still underway to match the vehicle and the battery exchange stations.

CATL had unveiled its Evogo battery swap solution in January 2022 and announced its first automotive partner for it with Aiways in April. In October, CATL formed a joint venture with carmaker SAIC and oil companies Sinopec and China National Petroleum to promote the spread of electric cars with swappable batteries. SAIC plans to produce adequate vehicles under several brands at once.

Lewis Hamilton must “up his game” to fend off George Russell who wants to “take the reins away”, predicts Johnny Herbert. A fascinating talking point as the 2023 F1 season looms is the relationship between the Mercedes teammates, both of whom have state that they want the championship for ...

In a Just World, Everyone Would Drive a Citroën GS

Citroen says EV revolution will bring ‘end to the SUV’