Like a new Taylor Swift album, the anticipation for the 2023 Mercedes EQB and the Audi Q4 E-tron is palpable. They’re electric and will go head-to-head. But, in the ways you measure a luxury SUV – space, pace, tech, and style – which comes out on top? Sure, the Tesla Model Y plays in this space, as does the Cadillac Lyriq and the Rivian R1S. But, in a Bavarian brawl, which should you pick, the cool Audi Q4 e-tron or the sleek Mercedes-Benz EQB? 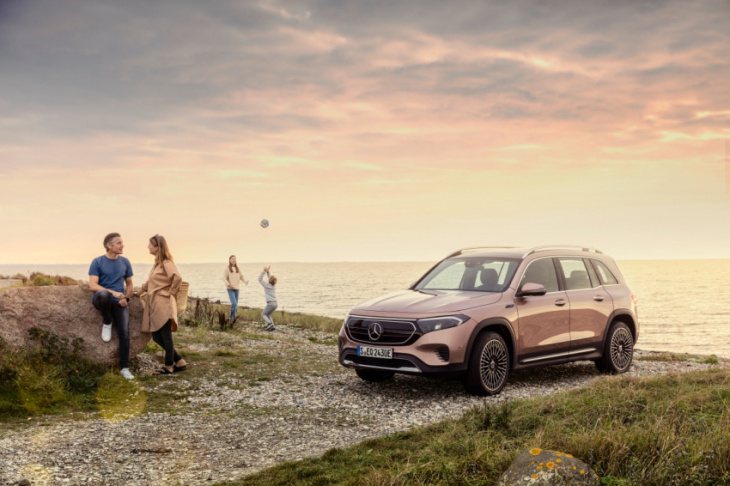 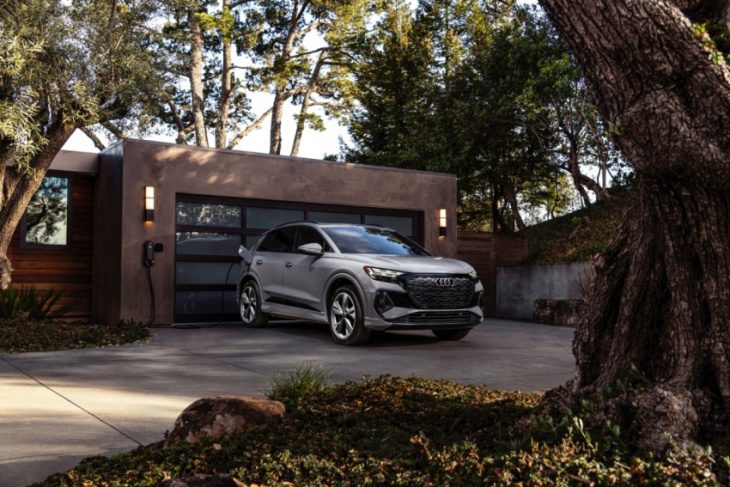 The Mercedes-Bez EQB starts at $54,500 for the 300 4Matic version, which is all-wheel drive, or $58,050 for the faster EQB 350 4Matic. You can add the Exclusive and Pinnacle trims that add niceties like 4-zone climate control that includes a (really) fragrance and ionizing purifier, a multi-camera surround view system, and a panoramic roof. On many other Benzes options can add up, but the packages on the EQB are more reasonable.

Space: The EQB is larger than the Audi 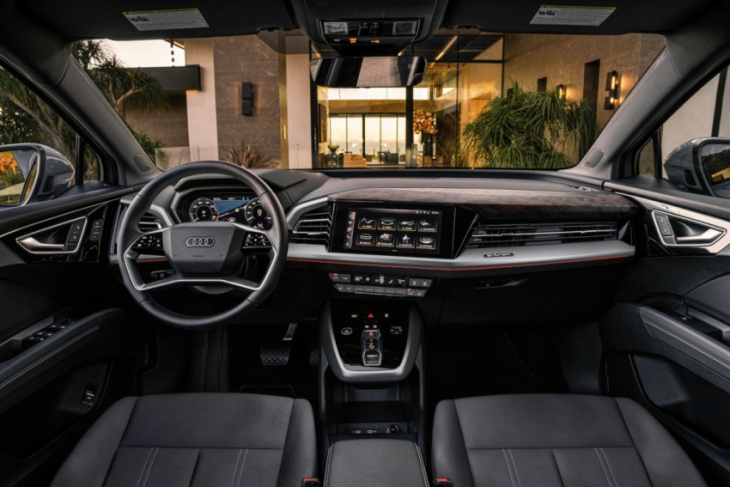 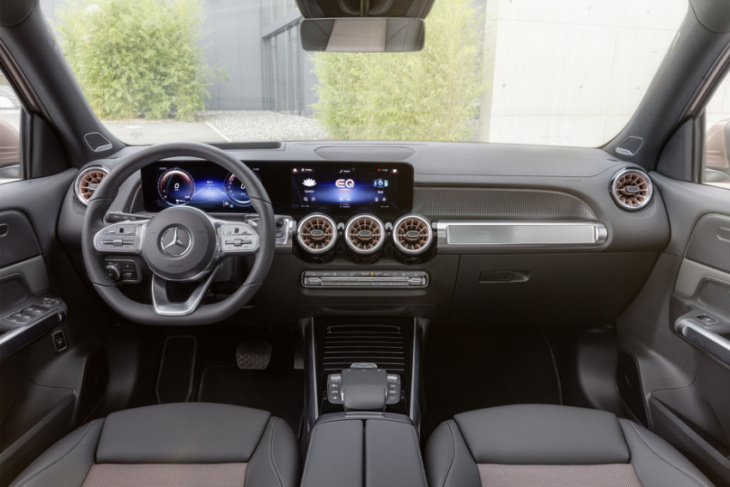 The Q4 e-tron is a five-seater SUV, while the EQB can be a seven-seater. The Audi is a tiny bit shorter, with an overall length of 180 inches. I n back, with the seats up, it can hold 25 cubic feet of stuff, and 52 cubic feet of cargo with seats folded.

The Mercedes comes with five seats standard, and the back row is a $1,250 option that also adds sliding middle seats. The Benz is only two inches longer than the Audi, yet it can hold 62 cubic feet of cargo with the seats folded, though only 22 cubic feet when they’re up.

Pace: The Mercedes wins, unless you toggle Audi’s boost 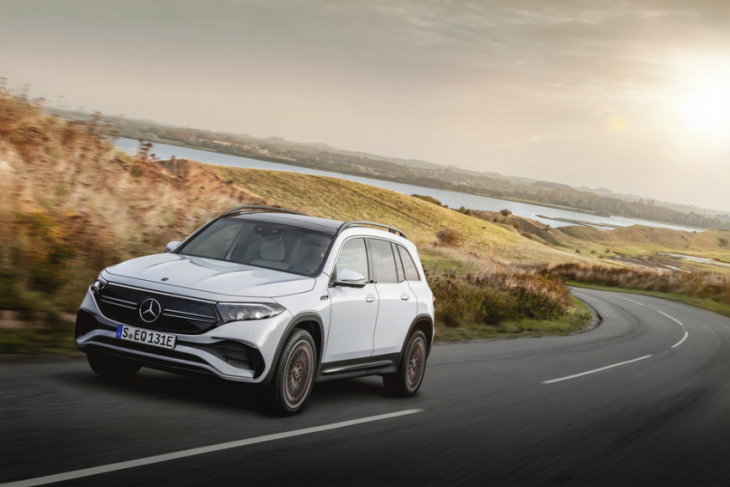 Neither SUV is a rocket ship, but not many will say they are slow. The Audi makes 201 horsepower and has a range of 265 miles. However, the Audi in 40 trim has an electric boost mode that, when you have charged battery, will let you add 94 more horses. It can be ordered in rear- or all-wheel drive. However, the more expensive 50 trim, though, trumps the Benz with 300 horsepower.

The Mercedes uses front and rear motors that make every EQB all-wheel drive. The EQB 300 makes 225 horsepower while the EQB 350 gets 288 horsepower. It has a range of up to 243 miles.

Both are technology-heavy SUVs

Both of these SUVs in the growing EV field come with the latest in their brands’ drivers safety aids. Audi’s is called Pre sense, and it scans the road ahead to alert you of obstacles. But, it also comes with adaptive cruse, lane guidance, park assist and more. Inside, it comes with an optional heads-up display, a Sonos sound system, a connected app, and a new MMI, or multi-touch display, that has faster processing.

The Mercedes brings the company’s new MB Navigation that helps you choose the most efficient route, all while also adjusting for traffic and terrain. The new Mercedes-Benz User Experience is voice activate and it uses AI to learn your routines and preferences. However, nearly everything is digital and it has a distinct lack of knobs or buttons on the dash.

Neither wants to advertise (too much) its electric bones

Pocket protection worthy of a quarterback. The EQB has all the latest safety features Mercedes-Benz has to offer. @shedeursanders​#MercedesAllStar, #MercedesBenz, #EQB pic.twitter.com/R9YcAfQcQZ

The Audi’s style certainly reflects the designs of the uber-popular Q3 and Q5 SUVs. In fact, it’s conservative profile means that only Audi fans may recognize the e-tron as an electric vehicle. That could pay dividends if you want to travel a bit more incognito. Inside, too, it looks like a Q5.

The Mercdes, too, tries to restrain its styling from barking “I’m electric.” But, the smooth grille and clearly modern design give it away as a space age SUV. It’s inside, though, that Mercedes took the chances and gave it fighter-jet like vents and a unique twin screen panel that stretches across a large portion of the dash. Overall, both of these SUVs try not to stand out as EVs and instead they look like the SUVs most of us see on the roads every day, just with a few tweaks.

Keyword: Does the Audi Q4 E-Tron Have What It Takes to Beat the Mercedes EQB?

Audi Q3 Sportback to be launched in India soon

With the Audi Q3 SUV already on sale in India, Audi India is now gearing up to launch the Q3 Sportback in the country and expand is SUV portfolio. The only difference between the Audi Q3 and Q3 Sportback is the coupe rear-end of the latter. Other than that the ...

Mercedes-AMG is celebrating its 55th anniversary by launching limited-edition versions of the A45 S, CLA45 S, and G63 in Australia. The A45 S 4MATIC+ Edition 55, CLA45 S 4MATIC+, and G63 Edition 55 were all revealed midway through last year but now have local pricing, as well as a confirmed ...

Like so many cutting-edge all-electric vehicles these days from legacy brands and newcomers alike, the all-new Audi e-tron GT immediately assumes the coveted position as the most powerful series production Audi ever built. RS e-tron GT Built on the same shared J1 electric car platform as its ballistically quick Porsche ...

The order bank for the Audi e-tron GT, the brand’s most powerful series production car ever, is already skewing towards the hottest RS variant. Though the RS e-tron GT is priced at $248,200 before on-road costs, or $68,000 more than the base e-tron GT, more customers have placed an order ...

While testifying on Wednesday, Sam Teller, Elon Musk’s former chief of staff, stated that the Tesla CEO had a “handshake deal” with representatives from the Saudi Arabia Public Investment Fund before the infamous “funding secured” tweet was posted on Twitter. Teller had worked closely with Musk from 2014 to ...

The Mercedes-Benz EQE and upcoming BMW i5 are set to get a rival from Ingolstadt that will also offer one of the few wagons in the electric vehicle market. Autocar reports the Audi A6 e-tron will launch in 2024 in both sedan and Avant wagon guise, and it will look ...

Most Reliable Audi A4 Years

Hundreds of Audi E-tron GT units coming to Australia in 2023, could outsell Taycan

Audi e-tron battery pack is seen ejecting during a crash