The new Jeep Wagoneer and Grand Wagoneer are making a big splash in the luxury SUV segment. Jeep has legions of devoted fans, but the lack of certain tech features could be a dealbreaker for some prospective buyers. So, does the 2023 Jeep Wagoneer have Apple CarPlay? And how does this SUV stack up against the competition? 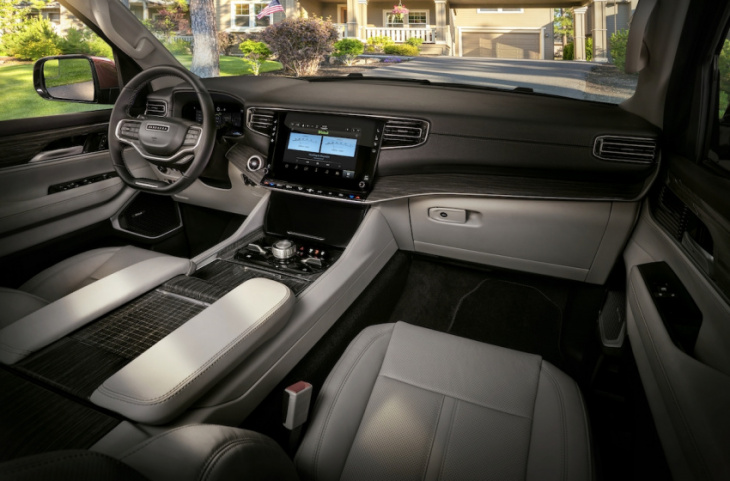 If the 2023 Jeep Wagoneer or Grand Wagoneer are on your shortlist and you’re an iPhone user, you’ll be pleased to learn that wireless Apple CarPlay comes standard in both models, per Stellantis. In fact, you’d probably be surprised if they didn’t. These models present quite an upgrade over previous models, with a longer wheelbase, new powertrain and performance options, and various upgraded infotainment and tech features.

Sporting 130-inch wheelbases, both models are also a full foot longer than previous versions, bringing them to a total length of 226.7 inches. As a result, they provide an impressive 44.2 cubic feet of cargo space behind the third row.

But if you’re equally interested in interior comfort and amenities, you’ll be happy to know the 2023 Jeep Wagoneer and Grand Wagoneer provide much more than Apple CarPlay.

Other tech features in the 2023 Jeep Wagoneer

Inside the 2023 Jeep Wagoneer, you’ll find seating for eight trimmed with leather, though higher trim levels offer even finer leather options, such as Nappa or Palermo. You can also upgrade to front-row and second-row captain’s chairs in the Wagoneer, though they’re standard equipment in the Grand Wagoneer. Front-row riders get a 10.1-inch or 12-inch touchscreen and a 10.25-inch display for controls.

The infotainment system is not only compatible with Apple CarPlay but also Amazon Alexa and Android Auto. Jeep’s UConnect 5 system that powers the infotainment options also has a range of apps, including Sirius XM 360L and Bluetooth capacity for two phones. Built-in navigation is voice-enabled and can provide live traffic updates. And the included 4G LTE wireless hotspot keeps up to eight devices online.

Both models have these impressive features, providing occupants with the connectivity they expect in new vehicles. And they definitely help make a compelling case for the 2023 Jeep Wagoneer to be your next SUV.

What is Apple CarPlay?

Because smartphones play a huge role in our lives, consumers want many of the same capabilities they find on their devices in their cars. Apple CarPlay extends a smartphone’s functionality into a vehicle, making it easy for a driver to access their contacts, music, messages, and other apps through their vehicle’s infotainment screen. However, CarPlay doesn’t just make it easier for drivers to sync their phones with their cars; it also controls the car’s functions through a single system. The latest version of Apple CarPlay will also let you engage the climate controls and see key vehicle indicators through the app.

And despite initial resistance from automakers, which weren’t keen on incorporating third-party software into their vehicles, most new models offer Apple CarPlay and Android Auto integration. Few of today’s models lack either or both. For instance, Tesla doesn’t provide either program, preferring that its customers use a proprietary system. But the EV maker has enough of a foothold in the market where their absence won’t make much of a difference.

Keyword: Does the 2023 Jeep Wagoneer Have Apple CarPlay?

Is Jeep Named After a Cartoon Character?

What is the original meaning of Jeep? What kind of animal is Eugene the Jeep? Is Jeep a proper name? If you ask four 4×4 fans where the Jeep name came from, you may get four separate answers. One popular theory is that WWII GIs nicknamed their 1/4-ton 4x4s ...


View more: Is Jeep Named After a Cartoon Character?

Project Titan Apple Entering the Vehicle Industry There have been rumors of Apple working on an electric car, calling it “Project Titan,” and those speculations include the vehicle being able to operate by itself. However, reports say that the car may not be fully self-driving after all. It will ...

Rumors have been swirling around for years regarding Apple’s plans for an electric, self-driving car. The latest report, which arrived on Tuesday via a usually reliable source, suggests Apple has scaled back its plan for an autonomous car, while some elements have yet to be agreed upon. Bloomberg’s Mark ...

FILE PHOTO: The Apple logo is seen during the preview of the redesigned and reimagined Apple Fifth Avenue store in New York (Reuters) -Apple Inc has scaled back ambitious self-driving plans for its future electric vehicle and postponed the car’s target launch date to 2026, Bloomberg News reported on ...

Apple scaled back its self-driving car, dubbed Project Titan by employees, and plans to debut it in 2026, Bloomberg reported, noting that the project has been in limbo for the past several months. After realizing that a fully autonomous vehicle without a steering wheel or pedals isn’t possible with ...

3 Alternatives to the 2023 Jeep Grand Cherokee

2022 Jeep Grand Cherokee: Observations after a day of driving