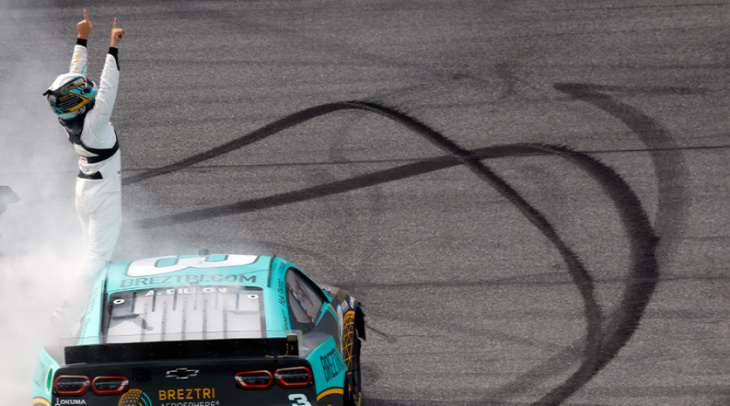 DAYTONA BEACH, Fla. — Austin Dillon endured multiple rain delays en route to winning Sunday’s Coke Zero Sugar 400 at Daytona International Speedway, but it was all worth it in the end, as he took the checkered flag and punched his ticket to the playoffs.

After rain pushed the race from Saturday night to Sunday morning, weather again brought Sunday’s race to a halt with 21 laps remaining following a massive, multi-car crash in the first turn that eliminated numerous contenders and pushed Dillon’s Richard Childress Racing Chevrolet into the lead.

After a lengthy rain delay, the Cup Series was able to get rolling again with only 10 cars on the lead lap.

However, with three laps to go, Dillon hooked Cindric sideways, sweeping the No. 2 Ford to the apron of the track.

From there, Dillon held serve in the closing laps, with teammate Tyler Reddick protecting the back bumper of the No. 3 to the checkered flag. Cindric finished third, with Chevy drivers Landon Cassill and Noah Gragson completing the top five.

How did Dillon manage to stay focused, amidst all that stood before him during the rain delay, while leading?

“Crazy faith,” Dillon said. “My wife was in there. She was dancing in the rain. I got upset. I said, ‘Don’t be doing that’. She said, ‘Lord, when you have faith like me, you don’t have to worry about it.’ I was like, Okay, okay. I got you, baby.

“But Ace was back there with me. We were watching Paw Patrol, watching the Carolina Cowboys winning the PBR event. They said, get ready. 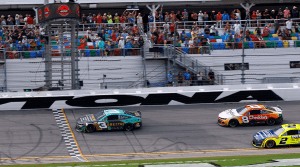 Dillon’s victory was his first since 2020 at Texas Motor Speedway, snapping a 78-race winless streak.

“It’s crazy. You just never give up and have faith,” Dillon said. “We had some tough finishes this year, like Charlotte (N.C.). I beat myself up over that. I made a good move and just didn’t finish it off. Today we finished it off.

“I’m so proud of these guys and I’m glad to be going to victory lane.”

Within the race at Daytona, was the race for the potential final playoff spot between Blaney and Truex, should a new winner appear.

After a Stage 1 crash collected Blaney, the driver of the No. 12 Ford had to limp his way around the track for the remainder of the event and hope for good luck the rest of the way.

Truex looked to be in good shape, until sustaining minor damage in an incident during the final stage.

What wasn’t known until the drop of the checkered flag, was whether a new winner would bump one of the two drivers out of the playoffs.

With Dillon in victory lane, Truex was eliminated.

Even though the driver of the No. 19 earned stage points throughout the 400-mile event, he would cross the line in eighth, three points shy of Blaney in 16th.

After a battle of attrition, Blaney held on with a wounded race car to finish 15th, six laps down.

With an overcast sky withholding rain long enough for the green flag to wave, Chase Elliott moved past polesitter Kyle Larson to capture the early lead.

Elliott maintained his position out front while Larson unfortunately ended his day with a trip back to the garage. As Stage 1 came to a close, it was Team Penske’s Joey Logano who passed Elliott for the win, while the No. 9 of Elliott and No. 43 of Erik Jones trailed behind.

Corey LaJoie and Bubba Wallace officially led the start of Stage 2. In order to protect his playoff chances, Blaney returned to the track more than a lap down, nursing damage to the front end of his race car.

The threat of rain continued to play a role as the teams nervously awaited the halfway point in the 160-lap event that would make the race official.

Late into the second stage, Kyle Busch and Tyler Reddick treated the Florida fans to a battle, with the Joe Gibbs Racing driver taking the Stage 2 victory.

Shortly after the green flag waved for the final stage, it was Logano and Reddick at the front of the field.

As fast as Chase Briscoe emerged to make a pass for the lead, the No. 14 made contact with the wall, collecting several cars with just over 30 laps to go.

Their contact allowed Aric Almirola to move up to second, fifth-place Daniel Suarez went to third and Chris Buescher settled in fourth.

Yet again, mayhem ensued a few laps later when it began raining as the field freight-trained into the first turn. Frontrunners Haley, Almirola, Buescher, Wallace, Kevin Harvick and others were collected in the aftermath, while Dillon weaved his No. 3 Chevrolet through the wreckage.

Dillon was the 16th different driver to win a Cup Series race this season.

David Hoffman and Grace Woelbing contributed to this report.

This story will be updated.

Carmakers chose between spending big on NFL placements or spending less on other programming, according to iSpot.tv.

Why would Ram make a one-tonne ute? What would a one-tonne Ram look like? “The biggest white space opportunity for our brand to grow, has been the midsize pickup” Snapshot Smaller Ram ute under consideration Potentially reviving Dakota nameplate Huge volume segment in Australia Ram doesn’t offer a mid-size ...

Rebel With an Off-Road Cause Conformist Powertrains What’s Inside? Pricing and Competition The Ram 2500 heavy-duty pickup truck is getting a new Rebel variant for 2023 to help it balance work and play. The 2500 Heavy Duty Rebel borrows off-road goods from its 1500 Rebel sibling while offering higher ...