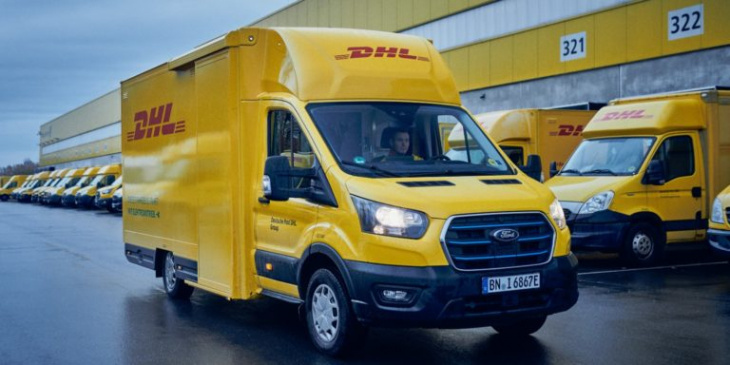 Ford Pro will equip Deutsche Post DHL Group with more than 2,000 electric delivery vans worldwide by the end of 2023. The German Group will use the new vans for last-mile logistics in various countries, including the UK.

Deutsche Post DHL has received the first Ford Pro vans and detailed Bulgaria, Belgium, Germany, Luxembourg, Mexico, the Netherlands, the United Kingdom and the Czech Republic as launch markets for the deployment.

The order is part of a global MoU between Deutsche Post and Ford Pro now signed. The current order volume concentrates on the E-Transit panel vans designed for handling express shipments in the Americas and Europe. Additionally, DHL purchased Ford Pro EVs with a customised box for inner-city distribution in Germany. Details are not yet available but will likely equal the ICE panel van. Although the box body increases the cargo volume, the range is likely to fall.

DHL Express reportedly added 270 E-Transit vans to its UK fleet this summer and was among Ford’s first trial customers last year after the company launched the E-Transit in late 2020.

The E-Transit quickly became “the top-selling commercial EV in North America and since June is also the best-seller in its segment in Europe, meaning the all-electric 2-tonne van is already making big strides to support this ambition,” said Hans Schep, general manager of Ford Pro, Europe.

DHL Group further expects the cooperation with Ford Pro to cover a full suite of solutions to operate the electric fleet, including access to Ford Pro’s connected E-Telematics software and charging solutions, also bringing them closer to zero-emission goals. The Group is targeting a share of 60% electric vehicles in logistics by 2030, effectively aiming to operate more than 80,000 electric vehicles within ten years. Deutsche Post DHL is also involved in several initiatives, such as the UN Sustainable Development Goals, the Climate Group’s EV100 initiative and the Science-Based Target initiative (SBTi).

For years, the company manufactured its own delivery vehicle, the StreetScooter. However, with selling the business to the Luxembourg holding company Odin Automotive this January, DPDHL now strongly relies on external vehicle partners. Ford Pro joins Mercedes and Volvo Trucks, among others, in delivering electric vans to Deutsche Post DHL as reported.