The Mach-E is becoming the EV of choice for law enforcement. 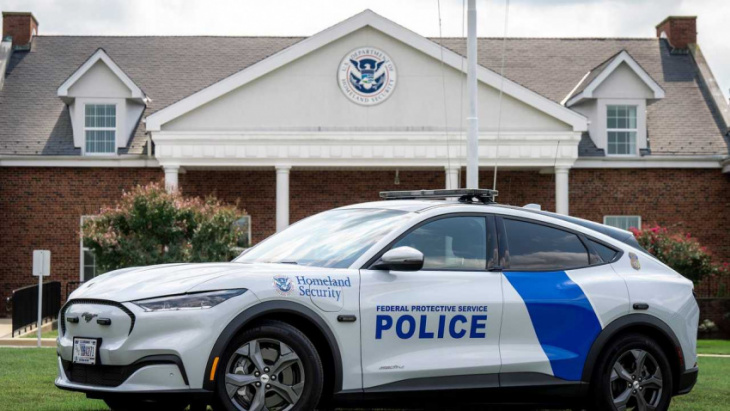 The Department Of Homeland Security is committed to electrifying its fleet, with the agency recently announcing the Ford Mustang Mach-E as its first EV. The US government has a long withstanding relationship with Ford, so it’s no surprise the Mach-E is the DHS’s electric vehicle of choice. The Mach-E will follow in the footsteps of the Explorer, Fusion, and Crown Victoria and is currently undergoing a wide array of tests to ensure it meets the durability and technical standards the DHS expects. The DHS released the following statement last week:

“As the Nation’s third largest federal agency and largest law enforcement agency, DHS has an inventory of more than 50,000 vehicles, with law enforcement vehicles making up 60 percent of its fleet. As we ramp up EV adoption, we are excited to see how this and other EVs perform for our mission.”

As we previously reported, the FBI has also added the Mach-E to its fleet. Furthermore, several police departments such as the NYPD have Mustang Mach-E squad cars. Aside from any existing relationship with Ford, the Mach-E appears to be a superb choice in general for US law enforcement. The model used by most departments, the Extended-Range AWD Mach-E, can launch from 0-60 mph in just 4.8 seconds – making it considerably quicker than the majority of police vehicles currently in operation. Furthermore, given it’s an EV the Mach-E’s running costs are considerably lower than those of ICE vehicles.

For consumers, the Mustang Mach-E currently has estimated delivery wait times of 18-35 weeks depending on the trim level chosen. Given the ongoing semiconductor shortage, those lead times aren’t too bad. The Mach-E currently starts at $46,895 before incentives.