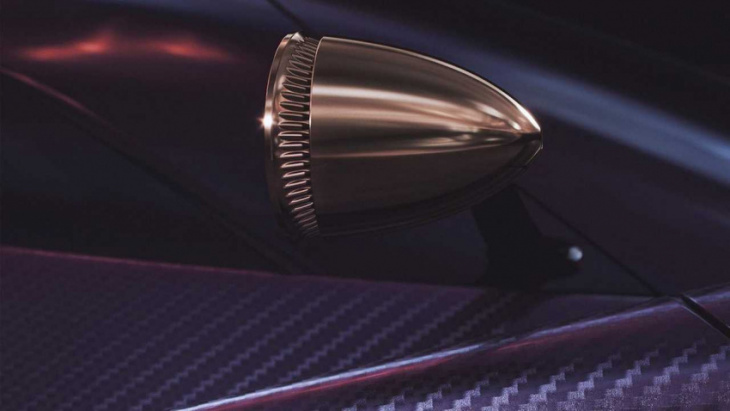 De Tomaso’s return to car production started in 2019 with the first P72 prototype. The automaker showed off the car again earlier this year, with customer deliveries expected to start in 2023. But it won’t be the only car from the company as it is now teasing the P900, a mysterious new model made with lots of carbon fiber.

De Tomaso posted three teaser images to Facebook, highlighting the car’s curvy bodywork and purple-tinged carbon weave. The clearest photo reveals the side-view mirror attached to the greenhouse, which looks identical in shape to the one on the P72. They feature a similar cut line for the door; however, that might be the only styling feature shared between the two, as the P900 looks like it’ll come with side windows. The rest of the photo shows aggressive bodywork with fins attached.

A second photo highlights one of the P900’s intakes. The picture makes it appear smaller and more shapely than the P72’s big scoops. The final image shows off the vents on the inside of the front fender, looking down over the windshield from the top of the car. The P72 has massive front wheel arches, which could make their way to the P900 and offer plenty of real estate for additional vents.

Details about the powertrain will have to wait until the car’s official reveal next week. The automaker tagged its Facebook post with #V8, #V10, and #V12, which could indicate the powertrains it’ll accommodate. The P72 debuted with a Ford-sourced V8 making 700 horsepower (515 kilowatts), and the prospects of V10 and V12 engines might mean the future De Tomaso will deliver more power.

We’ll get all the details soon, including our first complete look at the new bodywork. It could share some aspects with the P72, but the P900 could be a svelte-looking car if the teasers are any indication. The car looks more hardcore than the P72, so it’s unclear if the P72’s stunningly gorgeous interior will make its way into the P900. It could have similar styling but with different materials. De Tomaso will reveal the P900 next Tuesday, November 29. The automaker didn’t specify a time.