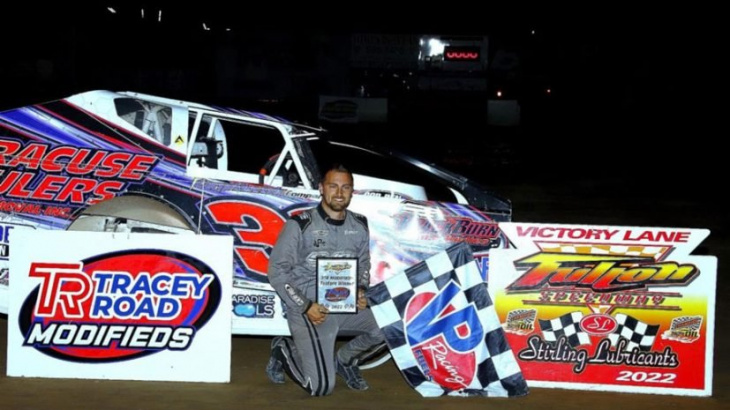 Davis would start the 35-lap feature in 15th, but would quickly move his way to the front. He took the lead on lap 12 and would never look back.

The win was far from easy, as late in the race, Davis had to get through heavy traffic and also outrun point leader Tim Sears Jr. The two are now set up for a one-race showdown for the championship on Saturday, Sept. 3.

Coming into championship night, Sears holds a 16-point lead over Davis and is 33 points ahead of Dave Marcuccilli.

Ryan Richardson would take the lead at the start of the 35-lap modified feature and would still set a fast pace through a couple yellows. Richardson was a few car lengths ahead of AJ Kingsley on lap 10.

After moving into the top-five, Davis would blast into the lead on lap-12 and start driving away from the field.

He was still in total command of the race at the halfway point with over a half a straightaway length of a lead over Sears, who also started deep in the field.

With 10 laps to go, Davis was on rails using the bottom of the speedway 2.3 seconds ahead of Sears.

Larry Wight, Barker and Richardson raced for third through fifth.

Over the final laps, traffic ahead of Davis was two and three wide, allowing Sears to quickly get within a few car lengths. Davis found the openings he needed to pick up the victory by 0.802 of a second at the checkers over Sears.

Wight, Rocky Warner from the LCQ and Corey Barker finished third through fifth.