Crashed Foxbody Mustang Splits In Half 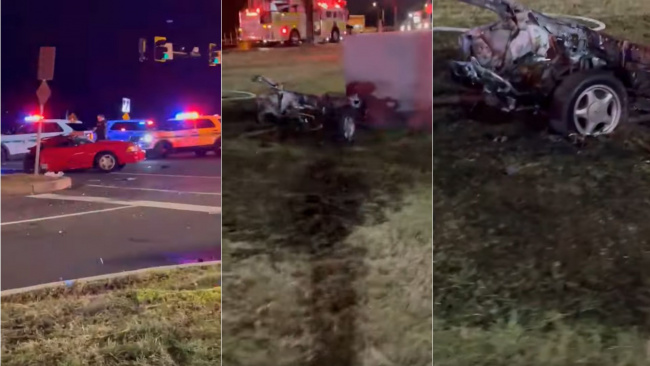 We’ve seen this before…

Yet another Foxbody Mustang has split in half after crashing, this time in Bristol Borough, Pennsylvania. According to a local news report, the crash took place around 5:45 pm on January 10 on Route 13 at the intersection with Commerce Circle. Police say the Ford and a Chevy sedan collided, causing the Mustang to split open like a pinata.

Thankfully, and by some miracle, the drivers of both cars weren’t seriously hurt. Video of the aftermath shows the front half of the Foxbody sitting in the road. The rear axle, with the wheels still attached, was thrown beyond the sidewalk on some grass easily over 100 feet away. The rest of the rear end of the Mustang appeared to be strewn along the ground, so it looks to have pretty much disintegrated.

A bystander told the local news outlet LevittownNow.com that the rear portion of the Foxbody Mustang originally ended up on top of a street sign and was on fire. We wish someone had video of that, because it sounds borderline unbelievable, but a search has turned up nothing. However, you’ll notice the grass around the rear axle does look charred in the video.

Everyone seems to revel in the stereotype that it’s “always a Mustang” when there’s some completely crazy, stupid crash involving a muscle car. Sadly, incidents like this only work to reinforce that line of thought. But what’s more interesting to us is the fact this Foxbody split in half, curiously in similar fashion to at least two other incidents we can immediately recall here and here.

Is this just a coincidence or is this a known weakness of Foxbodies? It really makes us wonder, but since none of us have ever owned one, we want to ask any enthusiasts who know these cars well to reach out and let us know if there is a known issue. After all, seeing any car split in half when it crashes is pretty crazy.

Watch A Porsche 718 Cayman GT4 RS Get Its First Bath

Ford Mustang Takes Out Traffic Light In The UK

Modern Cars Are Too Damn Fat

Who knew a pickup truck could come from the factory in a sport trim model. Classic automobiles come in many shapes and sizes, though the larger ones typically get the favor of older enthusiasts. All across the United States, we’ve got thousands, if not millions, of enthusiast looking to rebuild ...

This Japanese SUV can beat any Jeep. When you think of Toyota the first thing that pops into your mind may not in fact be offroading performance. However, back in the day, the Japanese brand was capable of producing some pretty intense beasts of utility. One such model is the ...


View more: Super Sport Classic's FJ40 Is Fully Restored & Ready For The Show or The Trail

Massive tires, lifted suspension, and a big V8. Yep, that’s an American. In the 1970s, automotive enthusiasts everywhere found a distinct taste for going off-roading. These days off routing is all about mud bogging and rock climbing, seemingly constant competition. However, back then it was mostly driving around on the ...


View more: Super Sport Classics Selling a 1972 Jimmy That Is The Off-Roader Of Your Dreams

It did not end well… A video is making the rounds of a Ford Mustang driver drifting on a public road right in front of a cop standing on the sidewalk. The guy loses control of his pony car as it careens over a cement median and into oncoming ...

Does this shock you? Stolen Dodge muscle cars and Kias have been grabbing plenty of headlines over the past few years, however a theft trend in Houston is targeting full-size GMC, Chevy, and Ford trucks. That’s according to theft reports gathered by Houston police. From January 2022 to June 2022 ...

The engineers probably weren’t expecting their car to have this much power decades after its initial build. Chevrolet’s premium unique muscle car, the Nova, was the vehicle built specifically with enthusiast in mind. It’s hard to find an example these days that doesn’t have a lot more horsepower than ...

Suffer Your Final Humiliation In A Ford Mach-E Hearse

Who would want to be caught dead in this thing? Someone has decided to transform the Ford Mach-E, an electric crossover with a Mustang badge, into a hearse. Really, it was only a matter of time before something like this happened, only we would’ve thought someone in the US or ...

Why does this keep happening? Stellantis should look at beefing up security for the Sterling Heights Assembly Plant, especially after thieves hit the place again, this time in the early morning hours on January 17. At least this time the 9 suspects didn’t get away with any vehicles. But ...

This Survivor, One-Owner Chevelle SS 396 Has Only 27k-Miles

You Could Win A Sold-Out Shelby Centennial Edition- Enter Now

Can You Nail These Jeopardy Car Clues?

Sammy Hagar Tells The Story Behind I Can’t Drive 55

Man Steals Over 50 Luxury Cars To Satisfy His 16 Girlfriends

Corvette And Cash Offered For Answers In Cold Case Murder

Sons Work Together To Buy Their Dad A 1966 Chevelle

Cascio Motors Offering 2,700-Mile Buick Reatta At No Reserve on Bring a Trailer

C8 Corvette Rockets Off Dyno And Crashes Into Wall

Jennifer Lopez Is Now Driving Around In A Rivian SUV

You Could Own A 650-Horsepower Corvette For 25 Bucks