Could High Truck Prices Be Going Down Soon?

Have you priced a new truck lately? The days of finding a good cheap truck are gone. Trucks have gone up-market and now compete with large SUVs as family vehicles, play vehicles, as well as good old work trucks. But, according to new reports, there may be some relief on the horizon from those high prices. 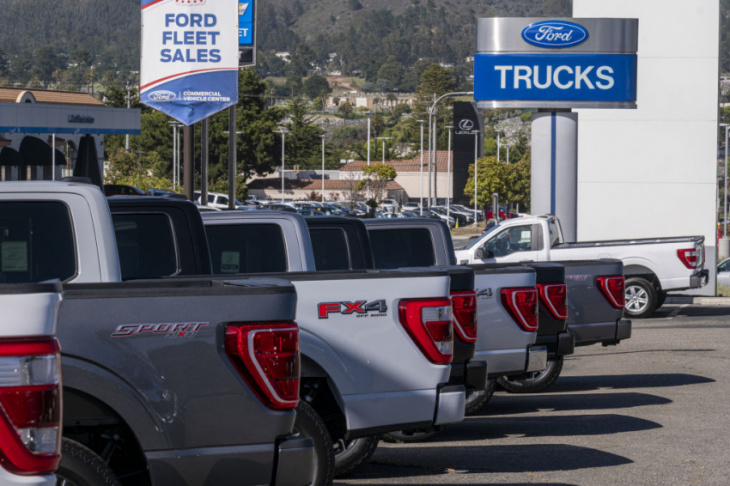 A Ford dealership with F-150s in the lot | David Paul Morris, Getty Images

The average price of a used truck is going down, and that means that there’s some extra supply in the market for the first time since 2020. The used car market doesn’t directly relate to the new one, but according to Kelley Blue Book, dealers paid about 4% less for used cars at auctions last month. Also, after sales that were off the charts for several years, they were down 9% in August at used car dealerships.

While new car prices are based on a lot of factors, like supply from the factory and a dealer’s own price constraints, lower used prices can lead to lower new prices. But not yet. The average full-size pickup truck price was $60,289 in March, which is a 9% increase from 2021, according to AutoList, which is a lot of F-150. So, full-sized truck prices aren’t dropping. But sales are.

According to new sales figures, though, truck sales are down so far this year. Last year, the truck market was down to a seven-year low, and its’s falling even further this year. Overall, manufacturers have sold 981,000 trucks in the first half of this year compared to 1.166 million in the first half of 2021. However, the percentage of trucks sold compared to other vehicles has gone up a tiny bit. That lower demand could force prices lower.

As manufacturers have moved all of their trucks upmarket to compete with SUVs and in some cases luxury cars, buyers are demanding more options and standard features and that means a higher price. But, we do get one vehicle in a modern truck that does more things better than ever before.

If anybody knew what prices of new cars would do in the next year, they should earn a Nobel Prize in economics. Most are expecting a dip, simply because of higher interest rates and an increase in the supply as the supply chain issues that constrained the market are figured out. But, in a recent Ford market outlook press release, the company said it expects “inflationary pressures,” to affect a broad range of costs, and the company expects to see an extra $4 billion in expenses this year, which could affect the price of your next truck.

Keyword: Could High Truck Prices Be Going Down Soon?