Jack Frank had just completed his first year at the University of British Columbia in 1969 when he parked his troublesome English-built Vauxhall in front of Vancouver’s Fred Deeley Motors intending to trade up to a sportscar. That’s where he spotted a three-year-old candy apple red Mustang.

“The salesman handed me the keys and invited me to take it for a spin,” the Vancouver lawyer recalls. “The car had the 225-horsepower engine with a four-speed transmission and would really go.”

After a tour to the UBC campus, a deal was struck for $1,945 and the Vauxhall. “I had to hold firm because that was all the money I had,” he recalls.

Jack was 19 years old and loved driving the car. He has been driving it ever since. That’s 53 years. But the car is a lot different than when he drove it off the dealer’s lot. It now has double the horsepower, a five-speed manual transmission and competition suspension.

Jack’s journey with the Mustang over more than five decades has taken him across Canada four times in all kinds of weather.  It was his transportation to and from UBC during his undergraduate years and while earning his MBA. Then he packed the car with his belongings and headed 5,000 kilometers east to attend law school at the University of New Brunswick in Fredericton. 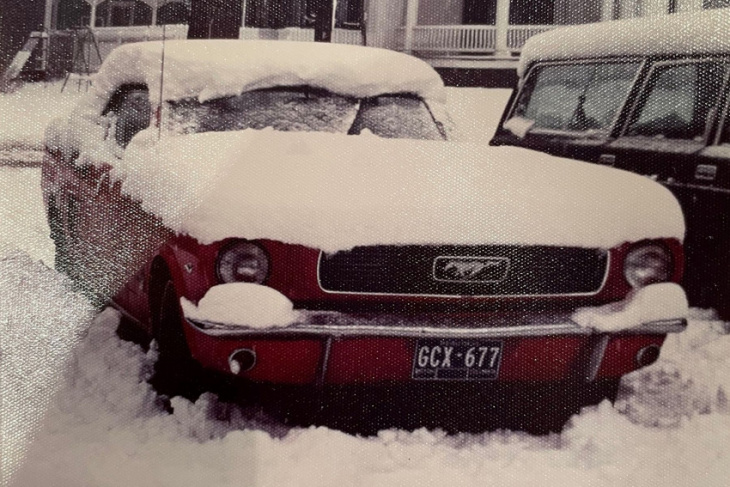 Jack Frank’s 1966 Mustang when he was attending law school in Fredericton, New Brunswick. Photo by Submitted

“Cruising speed was 85 miles per hour. The car was extremely reliable,” he says. Once in Fredericton, the extreme winters tested the Mustang. “When temperatures hit -25 to 30 below, many cars would not start, even with block heaters,” he says. “There was a steady group of individuals wanting a ride up the hill to campus.  Everyone knew, no matter how cold it was, this car would start We would pack in all the students in need of ride. It never let me down once in three years.”

On the first trip home to Vancouver from Fredericton, Jack, a championship golfer who has won amateur titles in New Brunswick and B.C., was scheduled for a tournament in the southern B.C. community of Oliver. He had given some fellow students a ride to Montreal and stopped to party for a few days.

Near Thunder Bay, he was fortunate to pick up two female hitchhikers from Grenoble, France. “I asked the girl sitting beside me, can you drive a standard shift? Her answer was: Like Volvo?”

His passenger took over driving while Jack slept in the rear seat. She drove right through the Prairie provinces. “I don’t know how she did it. When I woke up, I was refreshed and we got to Oliver in under 40 hours.” 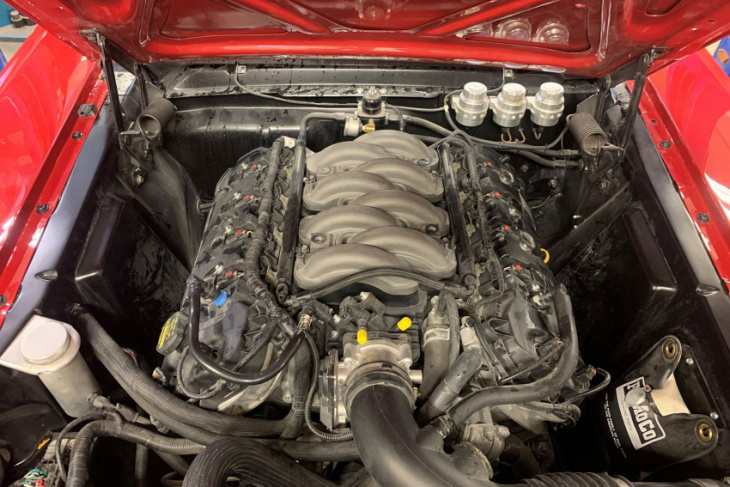 The Ford coyote engine putting out an estimated 475 horsepower. Photo by Alyn Edwards 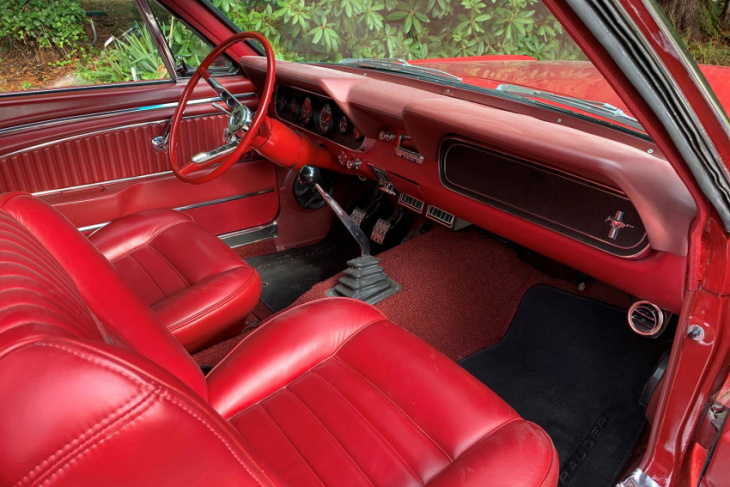 The refreshed interior of the Mustang shows modern air conditioning vents and a five-speed transmission shifter. Photo by Alyn Edwards 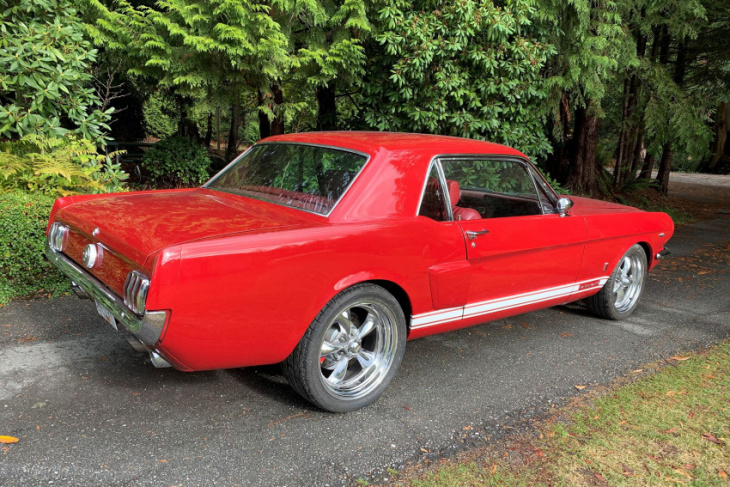 The 1966 Mustang displaying a contemporary look with custom wheels and striping. Photo by Alyn Edwards

By 1981, the year Jack was an articling student at a Vancouver law firm, the Mustang was getting worn out and the rust worm had burrowed into the car’s body and structure. He met Richmond high school auto mechanics teacher Doug Philip who had his own backyard shop. They tore the car apart and refurbished it with improvements designed to make it less rust prone.

The engine was rebuilt with higher compression so the Mustang would be even more peppy than before. “The car was like new again and it would be my only car,” he says.

Once called to the bar, Jack returned to Fredericton to work for a law firm and then spent seven years as in-house counsel for the Irving Oil conglomerate. He bought a winter car and used the Mustang only for fair weather driving. While driving at night in 1991, he swerved to miss a moose and went off the road into a wooded area. “The car was scraped and pretty banged up,” he recalls. “There was $5,000 in damage.”

A friend said he could turn it into a show car for that money and did just that with Jack working alongside him. The body and paint work lasted until 2014 when the rust worm was taking its toll once more and the Mustang needed another facelift.

Jack took it to a shop that had just completed work on a similar Mustang that included swapping in a modern high horsepower Ford coyote engine used to power new Mustangs.

Now his Mustang sports a contemporary look after a total rebuild with modern suspension and air conditioning, special wheels and, with high performance improvements to the coyote engine, 475 ponies under the hood running through a five-speed manual transmission.

“We’ve worked all the kinks out of it now and it’s all dialed in, so I quite enjoy driving it,” Jack says.

He plans to drive the venerable Mustang that has traveled more than 350,000 miles long into the future. “I have a couple of nephews who have known the car for more than 40 years and are adamant that this car should not be leaving the family.”

Jack’s nine-year-old son Herb is also in line for the Mustang. “He will get it if he decides it’s the car he likes. What I can say is, he likes it now.”

Alyn Edwards is a classic car enthusiast and partner in a Vancouver-based public relations company. aedwards@peakco.com