Coby & Baldwin Get Back On Track 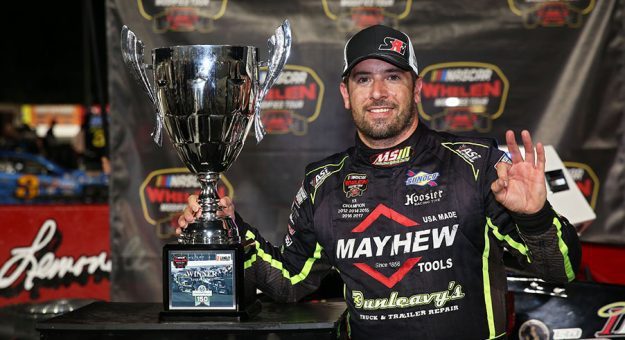 HAMPTON, Va. — It only took Doug Coby and Tommy Baldwin Racing one week to get their season back on track.

An accident between Coby and teammate Jimmy Blewett at Thompson Speedway Motorsports Park a couple weeks ago proved to be water under the bridge by the time the NASCAR Whelen Modified Tour descended onto Langley Speedway.

Coby led every lap from the pole in Saturday’s CheckeredFlag.com 150 for his third win of the year.

“Racing is an interesting sport,” Coby said. “A week ago, things didn’t go so well between me and this car, and [on Saturday] I drove it to victory lane at Langley. This is all about Tommy, his team and all the work they put in to making this car fast at any type of track. I love coming down here and putting on a great show for these fans.”

Ron Silk was the only driver who came close to matching Coby’s torrid pace. His second-place finish got him slightly closer to Jon McKennedy in the NASCAR Whelen Modified Tour standings after trailing by five points entering the weekend.

Silk tried everything to chase down Coby in the closing laps but said his car simply was not strong enough to mount a significant challenge.

“[Coby] was just a little bit better than we were,” Silk said. “I could stay with him a few laps after that last restart, but we were both running pretty hard at that point. He could just inch away, but I slipped up one time getting into turn one and lost all that ground in one shot. That was about it for me.”

Coby’s triumph at Langley gives him 34 career NASCAR Whelen Modified Tour victories. He considers himself fortunate to still be efficient at the age of 43 but credits Baldwin and everyone involved on the team for constantly providing him great cars every week he is with them.

“It means a lot to [win] here,” Coby said. “Anytime you come to a newer track for all the teams, it’s always nice to get a win. This is all about Tommy, his team and the effort they put in this past week to get the car here. What a rocket ship it has been all season. It’s been a long time since I’ve been the fastest in practice, won the pole and led all the laps.”

Keyword: Coby & Baldwin Get Back On Track