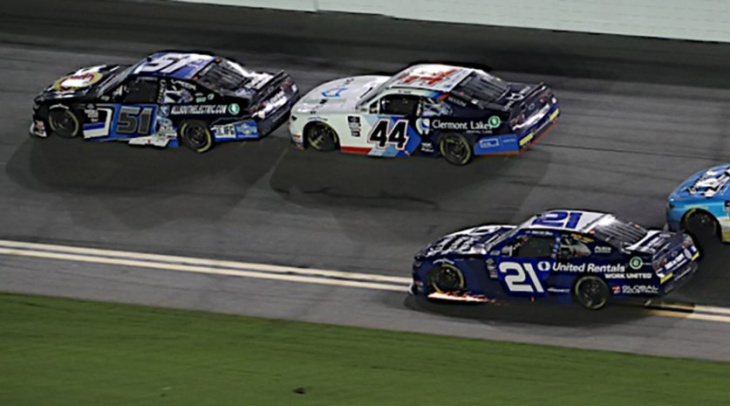 DAYTONA BEACH, Fla. – They say nothing good happens after 2 a.m.

Tell that to Jeremy Clements.

“Get the beer out, let’s go!” Clements shouted.

Why were Clements and the assembled media still at the World Center of Racing so late (or early)?

There was the bad: A roughly three hour rain delay had caused Friday night’s NASCAR Xfinity Series not to start until after 10:30 p.m. ET. Then, what was supposed to be a 100-lap event became 116 laps, thanks to three multi-car wrecks – eight cars, 13 cars and eight cars each.. 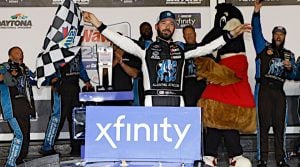 Then there was the good: Clements, 37, hadn’t been in any of those wrecks or the other two multi-car accidents that plagued the 2-mile track during the course of the night. And on the final restart, Clements received helpful pushes from fellow independent drivers, Sage Karam and Timmy Hill, that sent Clements to the lead.

That’s where he was when the final caution waved moments after the white flag.

That delivered Clements his second career Xfinity win and secured him a spot in the 12-driver playoff field.

The achievement came exactly five years to the date after Clements’ first surprise win, on Aug. 27, 2017 at Road America.

“We won at Daytona. I’m just, I’m dumbfounded.,” Clements said. “I’m shocked. I’m speechless. So I’m still trying to figure this out. And I’m just so grateful that we were able to do it. I can’t believe it.”

How Clements won added to his elation.

“There’s no words to describe it,” Clements said. “We won it legit. There was no BS caution or rain or …. anything (that) happened. We won. Hands down. So it’s pretty damn cool.”

Clements wasn’t the only one “dumbfounded” by what how their night wound up.

In sixth place was Ryan Vargas and his No. 6 Chevrolet

For the 21-year old JD Motorsports driver, it was his best-career finish in 61 starts

“I’m not present at all.  I’ve needed this mentally so bad, so, so bad,” Vargas told SPEED SPORT. “I didn’t think we’d end up here, but here we are getting the top 10. I’m so, so happy about that. These guys did a heck of a job. The car was great. We had an issue getting through the gears. It was like third gear was lagging so much, so we never were able to launch where we needed. But thankfully, Ty Gibbs was a legend and pushed me on that that final lap.”

To celebrate Vargas was going to celebrate by eating “lot of chicken nuggets.”

“It’s days like this that make everything so worth it,” he said, adding this his result came a week before a race at Darlington Raceway in which he doesn’t have sponsorship secured.

Finishing in front of Vargas was Karam.

The Alpha Prime Racing driver’s best-career result came in just his 11th start. A veteran of multiple Indianapolis 500 starts, he found it surreal to be answering questions about a surprising run at Daytona.

“I can’t even believe I’m having an interview with you guys talking about me pushing the leader to like a win at Daytona,” Karam said. “It’s so cool. I mean, you think about all the cool tracks in the world. You put Daytona up there with like Indianapolis and Le Mans, just all those amazing tracks and they’re so hard to do well at, but when you do well it’s just makes it that much more awesome and today’s a day I will obviously never forget and I hope it’s one that segues for me and into some more races in the future.”

Karam’s result was plagued by him being part of the race-ending caution, when he made contact with and spun Riley Herbst coming to the white flag.

“We’re all just jockeying for position, and it’s just one of those things where you’re trying to get clear and you think you’re clear and you’re not,” Karam said. “Then yeah, me and (Herbst) kind of touched a little bit and it was just enough to turn him. So I feel bad about that.”

There was one other surprise result in the top five. Timmy Hill came home in second for the best result of his NASCAR career.

Friday night’s race was the 446th career start for the Carl Long Motorsports driver across all three national series.

It was Hill who gave Clements the final push he needed to secure the win.

“I’m happy for those guys,” Hill said. “I thought if I pushed Jeremy out that would give me a shot to pass him at the end. But ultimately, second place is a really nice. ….. It’s a high, it’s a high for sure. These guys, we’re high fives all around.”

In the media center, Clements was experiencing “the best feeling ever.”

“We were the ones that survived for once and I’ve had my fair share of wrecks and everything so just to win is incredible,” said Clements, whose grandfather once served as the crew chief for AJ Foyt when he won the NASCAR Cup Series’ summer race at Daytona in 1964.

“I just keep looking at the world center of racing picture (on the back wall of the media center) and thinking that, when you grown up as a kid watching racing, watching NASCAR, I’ve been I’ve been a race fan all my life,” Clements said. “Racing is all I’ve ever done since I was 7. Even before that I was racing and tearing up my my mom and dad’s yard with the yard cart and just dreaming about to having an opportunity to race and to win a Daytona is just frickin’ phenomenal.”

When his time in the media center was over, Clements started to walk out of the room.

But then he had an idea.

He had to stop and commemorate the moment.

Clements took the race trophy and stood in front of the mural he’d mentioned, showing Daytona’s frontstretch grandstand, and had his picture taken.

For Clements, you never know when you’ll get another chance to celebrate a win. Let alone at Daytona.

.@JCR_Clements51 made sure to get his picture taken with this wall-sized photo of the @DAYTONA frontstretch grandstand.#NASCAR pic.twitter.com/i7Xzp6Jtb9