Clark Cruises To Victory At Tri-State 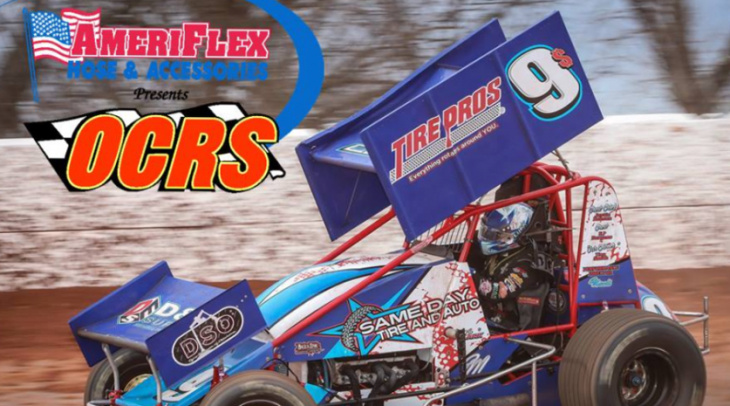 On May 20 at Tulsa Speedway Danny Smith took the lead and eventual victory away from Clark and he was ready to pay him back.

But it did not happen. Both were scheduled to start side-by-side on the front row, however Smith pulled out before the start with driveline issues. Clark took advantage of the situation leading all 20 laps in his Same Day Auto sprinter for his 4th OCRS career victory.

“I was disappointed when I saw Danny broke before the start,” said Clark. “I knew it was going to be a good race between me and him. He is always fast.”

“The driveline went out,” Smith said who earlier won his heat. “I felt it going out in the heat race”.

That moved Terry Easum to the front row and at the drop of the green Easum charged out front. However, Clark quickly powered past him before the lap ended.

“Terry got me on the first start and I got him back,” Clark said of Easum. “No one ever challenged (after that).”

Easum chased Clark the first six laps then gave up the spot to Ty Williams. Easum was challenged once by Rees Moran but regained the spot to finish third. Moran fell to 5th behind 4th place finisher Blake Edwards.

On Clark’s mind the whole race was a previous trip to Tri-State where hit and rode the wall during an ASCS race and he did not want to that again.

“I hit the wall the last time i was here and I was driving traffic real similar this time so I tried to stay off of it as much as I could,” Clark said of running up near the wall. “It was on my mind and I did not want a repeat of that.”

And track conditions were similar to that last race.

“The track never took rubber and had a curb on both ends,” Clark said. “The curb kind of went away in turns 1-2. It was hammer down all the way around the track. I just had to make sure not to hit the wall out of two.”