Citroën – a brand built on serene comfort and original thinking – is striving to return to its roots with the C5X, a plug-in hybrid and petrol-powered ‘crossover’. While many car company marketers use the C-word, the Citroën genuinely is a cross-breed, mixing an estate’s space and practicality, an SUV’s big wheels and ride height, a cushy ride and a design that’s refreshingly hard to categorise.

C5X UK deliveries begin in June, with the base 128bhp petrol costing from £26,490, and plug-in prices starting at £35,180. Read on for the full specs, prices and our first driving impressions. 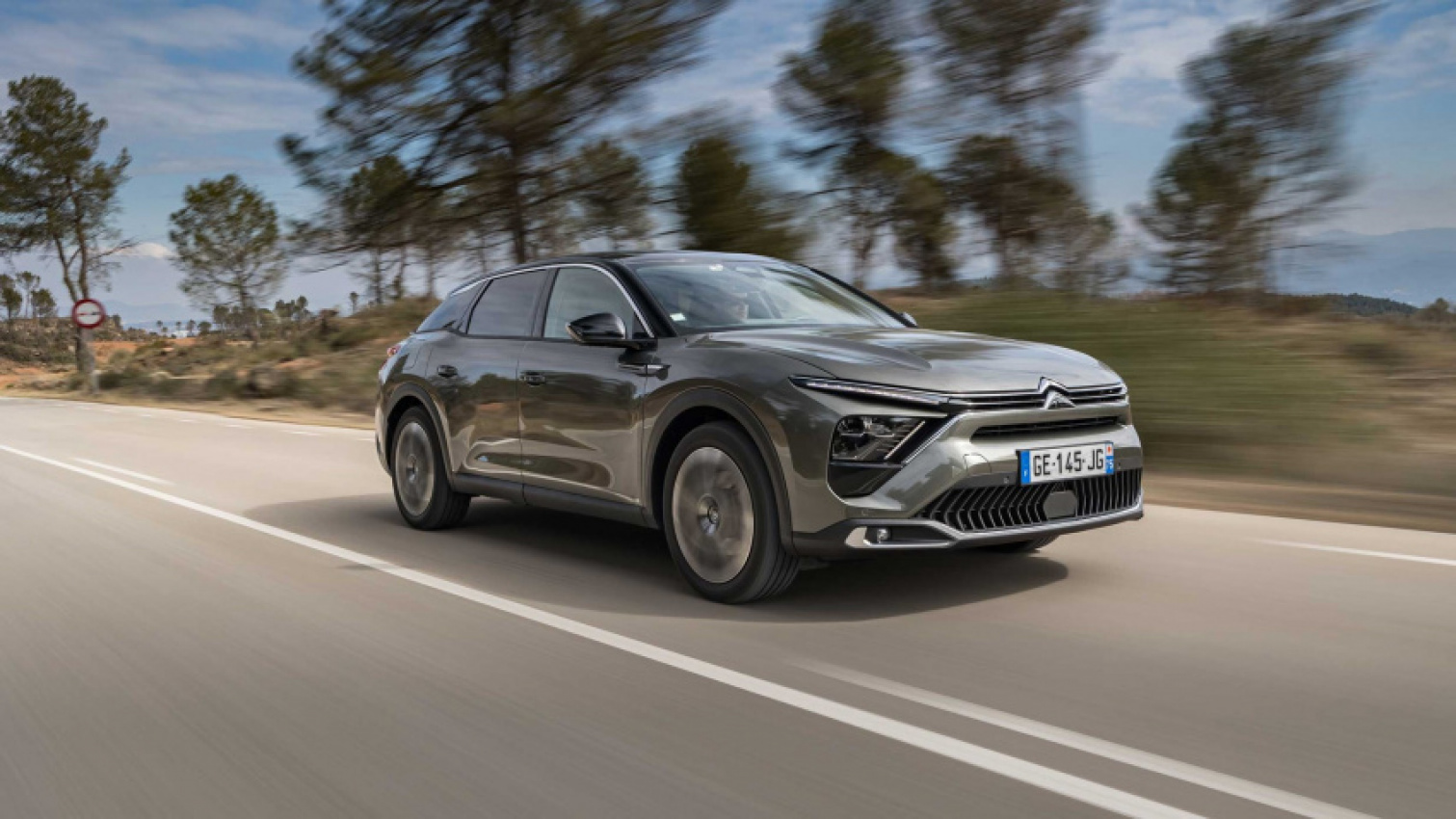 So this is a big, five-seat Citroën measuring 4805mm long, some 50mm longer than an Audi A5 Sportback. Citroën’s engineers have stretched the estate concept to boost interior space, much like conceptually similar hatchbacks, the Vauxhall Signum (RIP 2008) and BMW 5/6-series Gran Turismo.

Given both those cars have felt the chill wind of public indifference, and recent big Citroëns have proven immune to the car-buying public, you might be instantly writing off the C5X. But that would be premature: this Citroën has a few jokers in the pack.

First up it has as much rear acreage as the Duchy of Cornwall, so plenty of space to stetch your legs and tall people won’t suffer headliner burns. And the front seats – trimmed in trad black leather in this test car – feel like armchairs stuffed with goose down: it’s a real ‘ahhhh’ moment snuggling into them. 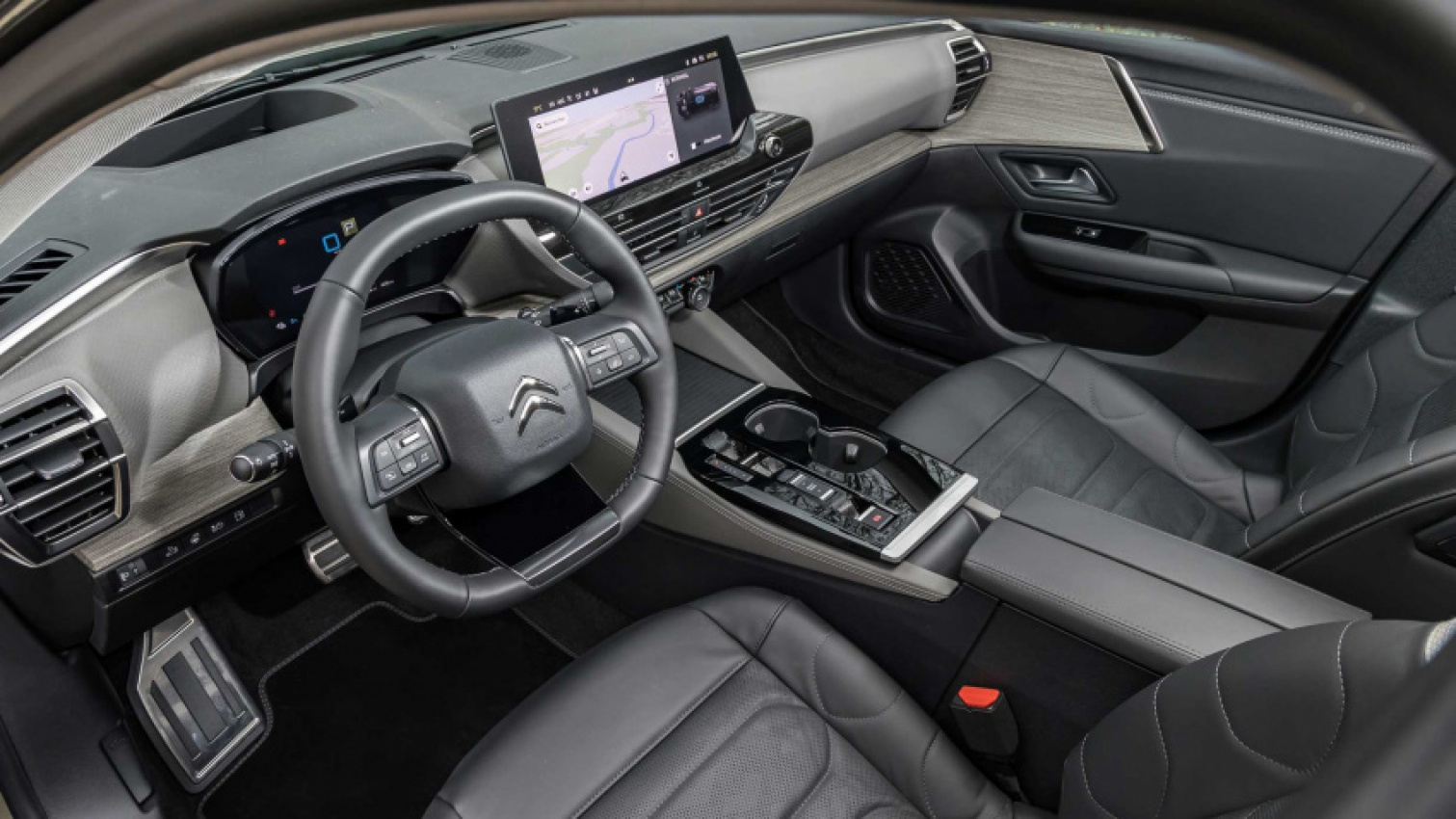 We start in the 225 Hybrid, which combines a 178bhp four-cylinder petrol engine and 81kW (109bhp) electric motor, driving the front wheels through an eight-speed automatic transmission. A boot-mounted 12.4kWh battery pack, which charges in just over 90minutes on a 7.4kW wallbox, gives a theoretical electric range of up to 31 miles.

Steering has not been a recent Citroën strength, but the C5X’s rack has big-car weight, and responds without any bagginess and pretty consistently even when twisty roads up the dynamic load.

Acoustic glass keeps noise out. And Citroën’s comfort suspension, with hydraulic bump-stops which dissipate shocks at both extremes of the suspension stroke, is also standard. But the plug-in hybrid (PHEV) adds active damping on each corner, continuously stiffened or slackened by sensors calculating inputs including road imperfections and your driving style.

Let’s get moving – in comfort and calm

Easing out of Barcelona’s airport hotel and onto the autoroute downtown, and aside from some welcome e-motor whine the silence is deafening, the ride cosseting. Scarred tarmac and expansion joints pass with barely a murmur. The wide diameter 19-inch alloys make for a commanding driving position, though the driver’s seat drops pretty low if that’s your thing.

Barcelona is not a relaxing city to navigate, with the ranks of swarming mopeds now swelled by kamikaze e-scooter dudes, six-lane avenues with confusing parallel roadways, on-off bus lane traps and zero tolerance of tardy responses to the hair-trigger traffic light changes. 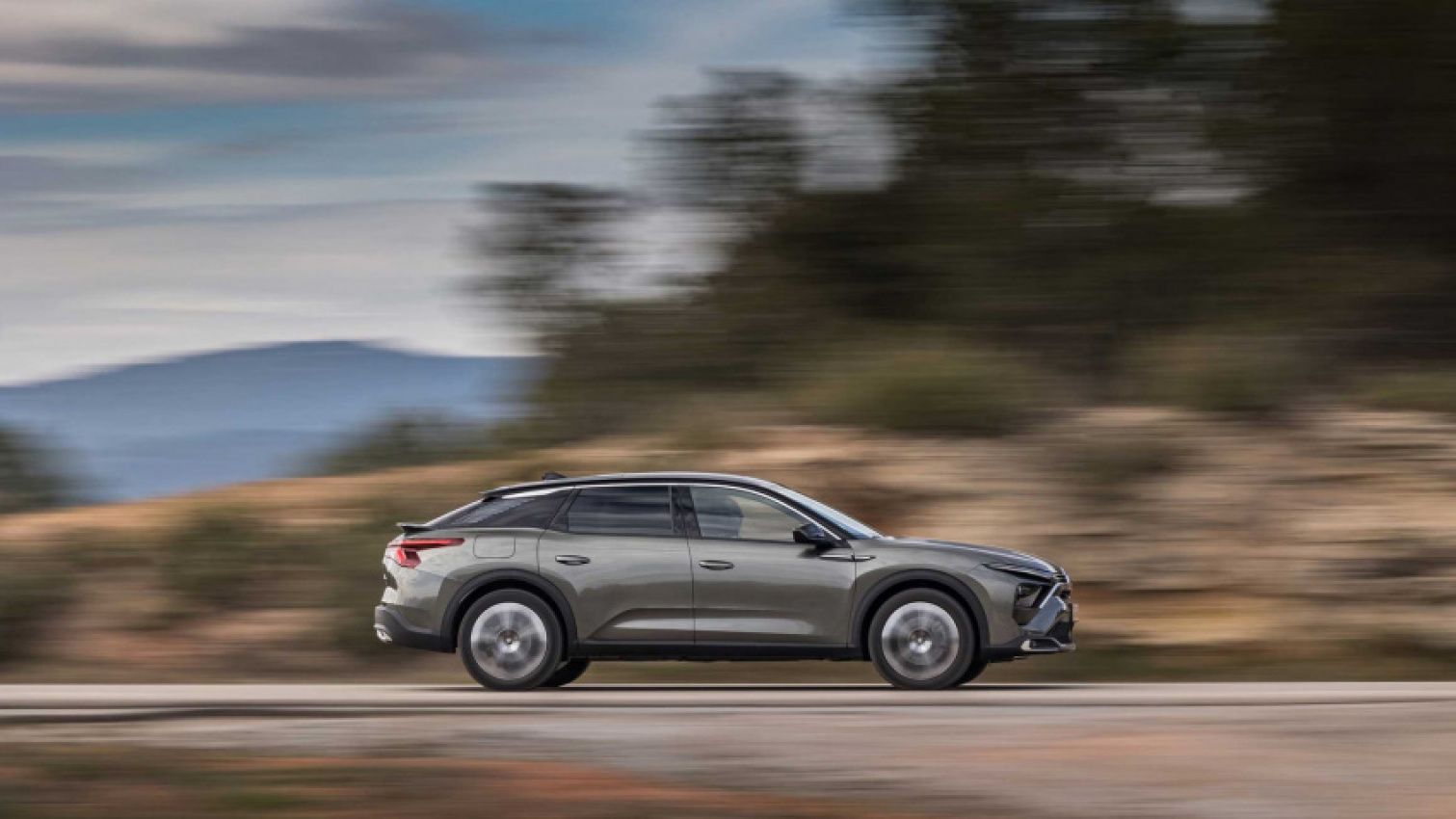 But the C5X PHEV massages away the stress, with your choice of navigation arrows in the head-up display, graphically barren driver’s binnacle or 12-inch central touchscreen doing a reasonable job of minimising wrong turns, and the e-motor providing sufficient thrust to surge through amber lights and nip into traffic gaps.

All the while, there’s more peace and quiet than when the kids have gone to grandma’s for half-term. If you value refinement, the C5X is like winning the lottery.

The C5X largely keeps its composure when the pace picks up and the tarmac rolls up, down and around the mountains guarding the city. The PHEV is 304kg heavier than the base petrol, so the body naturally leans into corners, but it’s well-controlled without any float or excessive pitching. Even a baggy brake pedal, a long Citroën bugbear, is pleasantly absent, replaced by pretty crisp bite.

There are three active damping settings: normal in electric and hybrid modes, with comfort and Sport doing largely what it says on the tin. The latter does a reasonable job of dropping cogs or holding onto gears to summon peak power, and the Michelin e-Primacy-clad front wheels grip the tarmac resolutely, but if you’re looking for BMW 3-series thrills, look away now. This is an alternative to the German sporty doctrine. 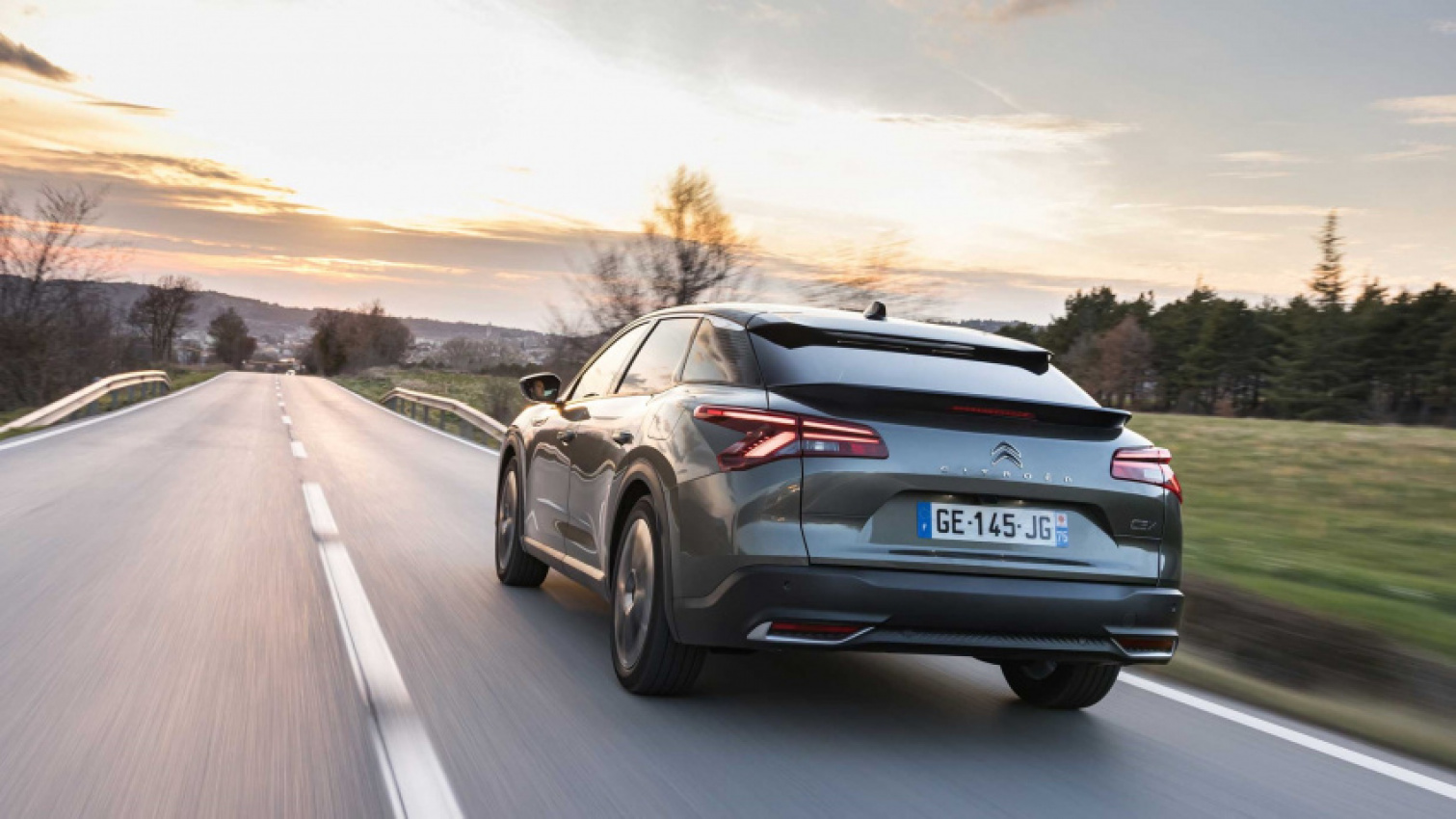 Talk me through the range and specs

Citroën has kept the range deliberately simple: one hybrid, no diesels (demand has dropped precipitously) and the two petrol engines, the second being a 176bhp fourpot. There are three trim levels, Sense Plus, Shine and Shine Plus. 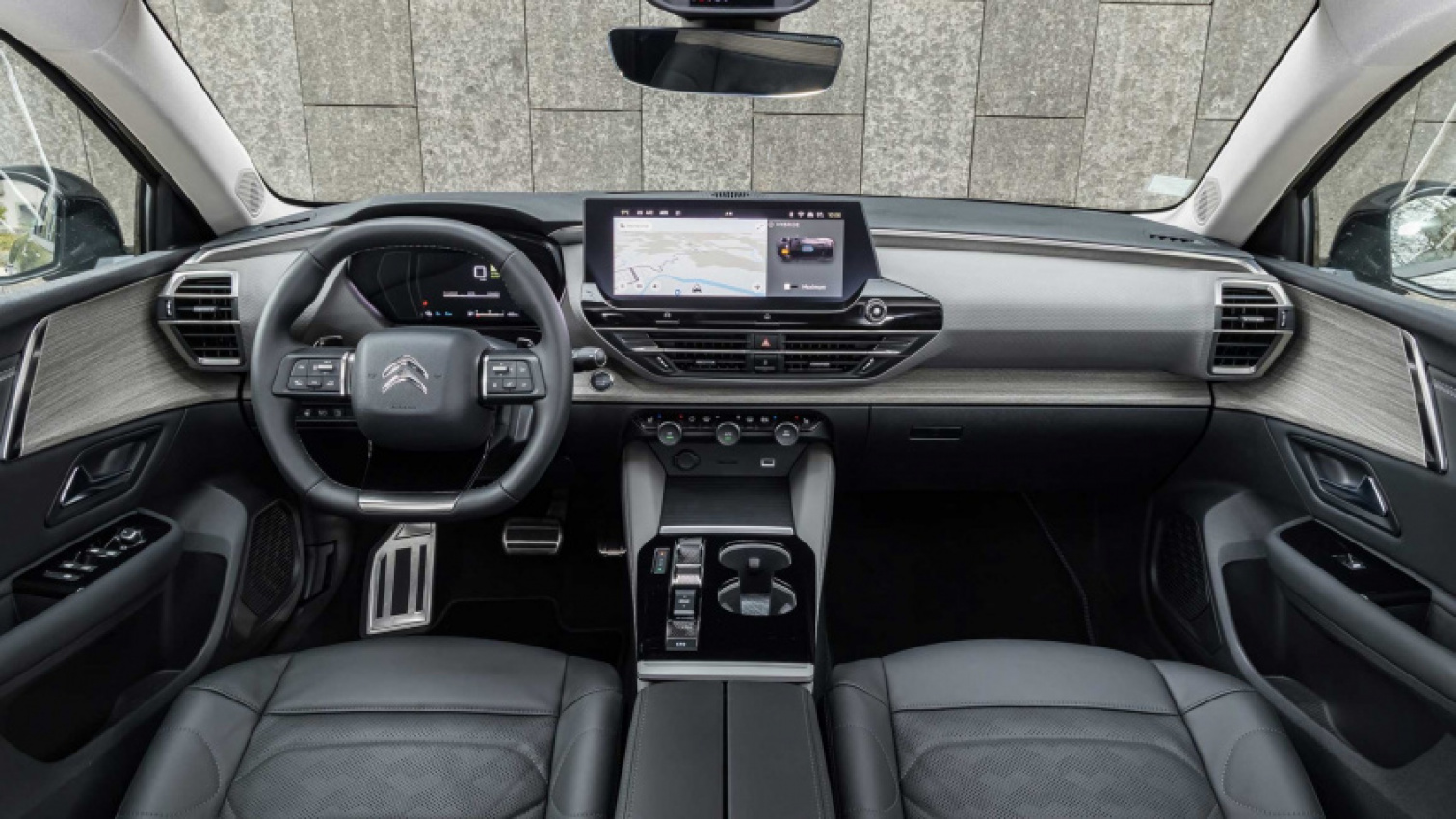 A comprehensive safety package includes forward collision warning, lane keep assist, speed limit monitoring and cruise control, though the automatic emergency braking eschews a radar so is less capable of spotting pedestrians and cyclists and is less effective at night.

Nice touches include Citroën double chevron stitching and floating air vents bookending the dashboard, and there’s a panel of air-con switches for those who prefer physical to digital. The touchscreen looks a bit tacked on, with a bafflingly beige colour scheme and naff ‘80s computer blocks to symbolise the voice assistant is computing something. And the optional glass roof doesn’t extend sufficiently far back to cater for rear passengers. The boot is great though: wide and with a low sill, with a cargo space sufficiently big for a washing machine behind the rear seats. Luggage capacity is 485 litres for the hybrid and 545 for the combustion car, extending to 1580 and 1640 litres respectively seats folded. There are release handles in the boot to make this easy, but the Isofix child seat brackets are infuriatingly hard to access behind zips and obscured by Botoxed leather.

And how efficient is the C5X?

The C5X shares its engines with the C5 Aircross. Despite being some 300mm longer, the X is similar on weight – indeed the Hybrid 225 is almost 50kg lighter.

The hybrid’s official lab tested economy is 186mpg – thanks to a generous allowance of electric power in the test cycle – which equates to 30-34g/km of CO2. On our test route, we averaged 43.6mpg, not bad considering our enthusiastic driving and switching to eSave for 30mins to charge the batteries.

The C5X is a breath of fresh air. It squarely nails its brief to offer a calming, spacious and supremely comfortable vehicle. And it’s keenly priced too. Citroën is one of the first car makers to show a credible vision for a post-SUV bodystyle, with some of its practical benefits but improved aerodynamic efficiency. If you like the sound of that blueprint, the C5X is absolutely worth a look. It has genuine X-factor.