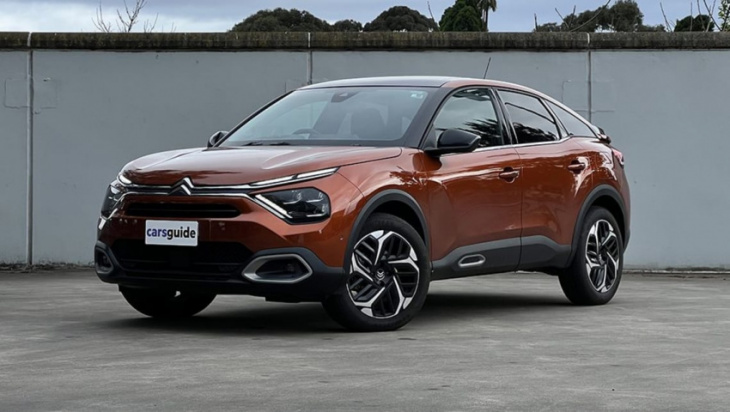 The new – and very quirky – Citroen C4 Shine is living with me for three months. (image: Justin Hilliard) 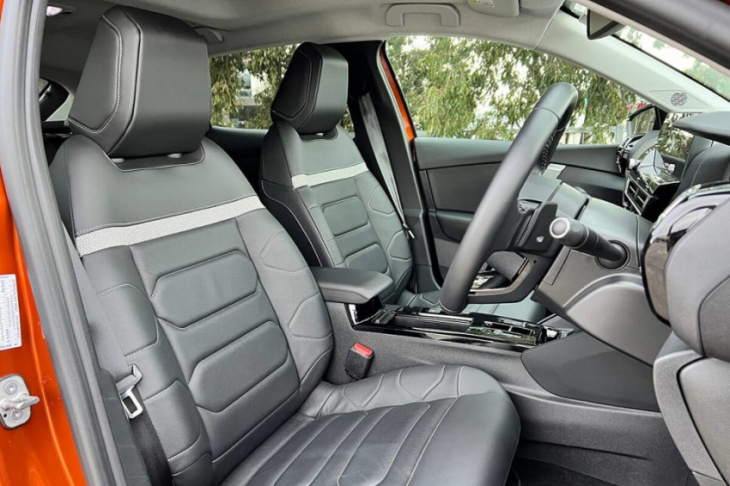 How many cars at this price point come with massaging front seats? (image: Justin Hilliard) 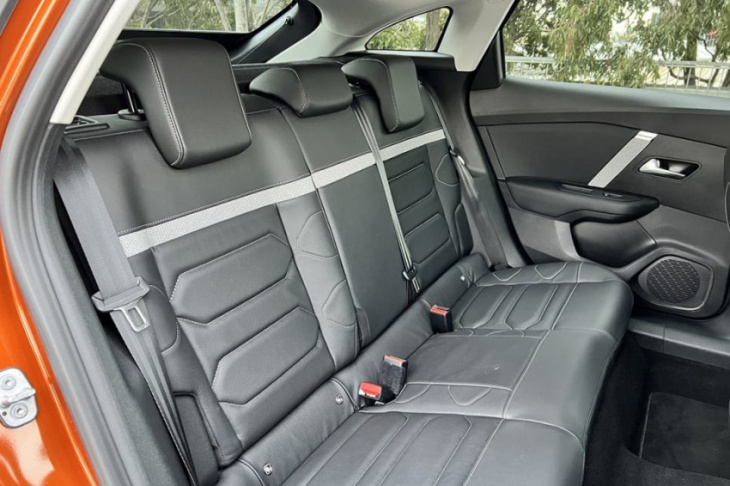 Even with the price increase, the C4 still has a lot to offer. (image: Justin Hilliard)

Bonjour! Please welcome the next long-term addition to my garage, the Citroen C4 Shine. That’s right; France’s latest quirky model will be put to the UrbanGuide test over the next three months.

Now, with most models, it’s pretty clear what they are. A Ford Ranger is a ute, and a Toyota RAV4 is an SUV, after all. But the Citroen C4 is a little different – because of course it is.

If you called the C4 a hatchback (as it was in its first two generations), you’d be right. But if you called it a fastback or an SUV, you wouldn’t be wrong, either. Yep, this third-generation Citroen is a whacky combination of all of the above.

But we’ll unpack the C4’s unique design – and its practicality – in the next instalment of this long-term review. For now, let’s explore why this Citroen actually might be good value.

Hear me out. I know ‘French cars’ and ‘good value’ aren’t terms Australians are used to reading in the same sentence, but the C4 might just break that mould, too. 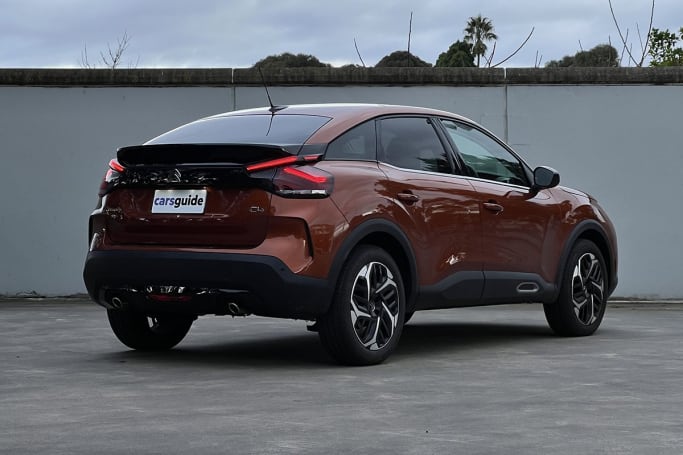 The Citroen C4 is a little different – because of course it is. (image: Justin Hilliard)

At $39,990, plus on-road costs, the C4’s flagship – and only – variant, the Shine, costs a fair chunk of change for what is ‘officially’ classified as a small SUV. And that’s after its recent $2000 price rise, which was prompted by the on-going sharp rise in inflation.

Even so, the C4 still has a lot to offer. After all, how many cars at this price point come with massaging front seats? They’re also heated, albeit not cooled. Either way, that is a luxury feature in a semi-premium car and something the rivalling Volkswagen T-Roc 110TSI Style ($35,500), Mazda MX-30 G20e Astina ($41,190) and Renault Arkana RS Line ($43,300) lack.

Trimmed in black ‘Siena’ leather upholstery with ‘Zephyr Grey’ stitching and patterned inserts, the partially power-adjustable Advanced Comfort Seats are seriously lush to sit on and, therefore, a genuinely strong selling point for the C4.

So too are the suspension’s ‘Progressive Hydraulic Cushions’ (another signature Citroen feature) but we’ll unpack just how well the C4 rides and drives overall in the third and final instalment of this long-term review.

How many cars at this price point come with massaging front seats? (image: Justin Hilliard)

Even with the price increase, the C4 still has a lot to offer. (image: Justin Hilliard)

So, what else does the C4 come with? Well, aside from a competitive five-year/unlimited-kilometre warranty with roadside assistance, it gets dusk-sensing LED lights, rain-sensing wipers, 18-inch ‘Aeroblade’ alloy wheels (with a space-saver spare), power-folding side mirrors with heating and ‘Obsidian Black’ covers, puddle lights, keyless entry and rear privacy glass.

Inside, the headline act is the 10.0-inch touchscreen multimedia system with satellite navigation, digital radio and wired (but not wireless) Apple CarPlay and Android Auto support. It’s complemented by a small, 5.5-inch digital instrument cluster and a retractable head-up display.

Aside from $690 metallic paintwork (my test vehicle is finished in the ‘Pulse Orange’ hero colour), the only option for the C4 is a $1490 panoramic sunroof, which is also fitted here. As such, the price as tested is $42,170.

Safety-wise, the C4 doesn’t go quite as far as it should. Its autonomous emergency braking (AEB) system has all-day pedestrian and cyclist detection, which is great. But it lacks intersection assist, which would help to prevent collisions when turning into oncoming traffic. 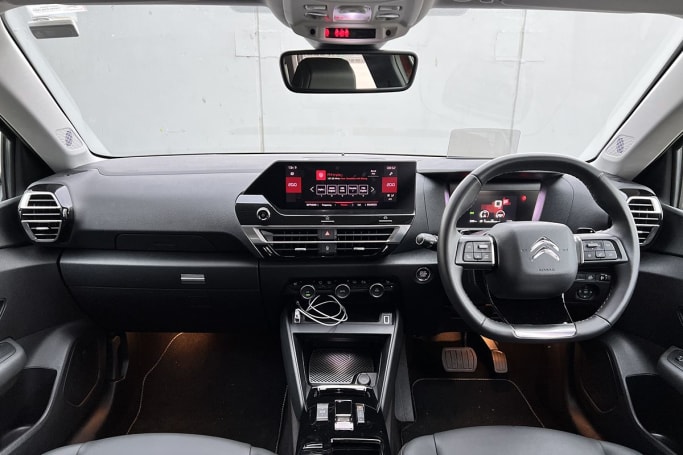 Inside, the headline act is the 10.0-inch touchscreen multimedia system. (image: Justin Hilliard)

Then there’s half-baked lane support systems. The C4 comes with lane departure warning but not proper lane-keep assist, let alone steering assist with or without emergency functionality. And what you do get doesn’t even work that well – but more on that later.

Adaptive cruise control (with stop and go functionality) is pleasingly on hand, though, and so is traffic sign recognition, driver attention alert, high-beam assist and blind-spot monitoring.

But it’d be nice if some form of cross-traffic alert was included, too. At least the C4 covers the basics (a reversing camera, parking sensors, hill-start assist, tyre pressure monitoring, anti-lock brakes and electronic stability control).

Perhaps more importantly, the C4’s airbag count is six, with dual front, side and curtain items fitted. As such, a head-clash-limiting centre airbag is nowhere to be found, which is a shame considering new models need to be fitted with one in order to have a chance at getting the maximum five-star ANCAP safety rating.

Speaking of which, it should come as no surprise that Australia’s independent vehicle safety authority only gave the C4 four stars in 2021, mainly for that very reason. Again, Citroen could’ve tried a little harder in such a critical area.

Another aspect in which the C4 leaves a little to be desired is servicing. Pleasingly, prices are capped for the first five years or 75,000km, but they’re not as competitive as they should be, especially for a brand that’s struggling to convince non-loyalists to take a chance. 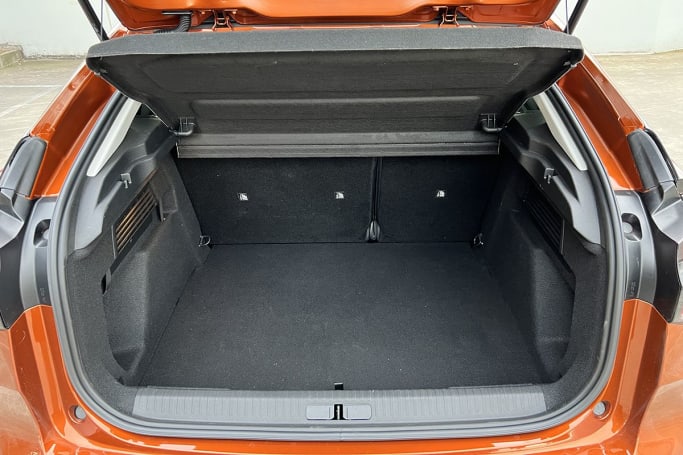 Either way, service intervals are every 12 months or 15,000km (whichever comes first), with the first five costing $2484 in total, or an average of $496.80 per visit – something to keep in mind when crunching the numbers before buying.

The C4 does win back some brownie points under the bonnet, though, where an entertaining 1.2-litre turbo-petrol three-cylinder engine is located. While it’s easy to dismiss the cubic capacity and cylinder count of such a unit, you shouldn’t.

Paired to an eight-speed Aisin-sourced torque-converter automatic transmission (with paddle-shifters), the C4 uses a frugal 6.1L/100km of 95RON petrol on the combined-cycle test (ADR 81/02), during which it has carbon dioxide (CO2) emissions of 138g/km. 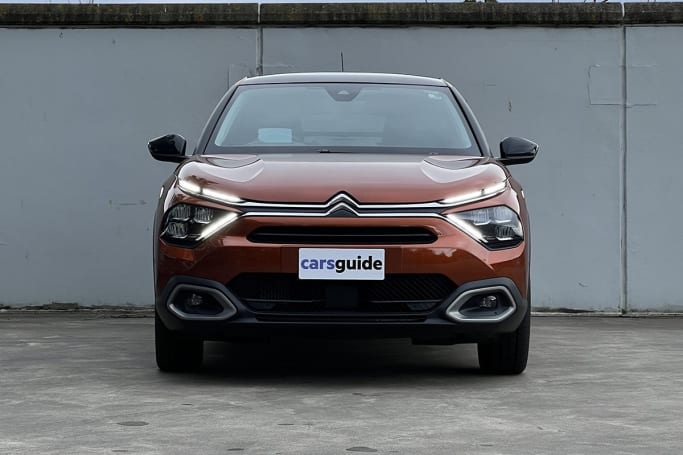 The C4 delivers healthy power and torque outputs, which are very competitive in the Small SUV segment. (image: Justin Hilliard)

That said, in my first month with the C4, I averaged a much higher 8.4L/100km over 699km of driving, most of which took place within the city limits, in keeping with our UrbanGuide approach.

And for that reason, it’s best to compare my real-world results with the Citroen’s urban-cycle claim of 7.7L/100km. In which case, I wasn’t that far off this time around.

Of course, I’ll be doing plenty more testing of the C4’s fuel consumption over my next two months of ‘ownership’. And with that, I’ll see you next month for my full thoughts on its design and practicality. Au revoir!

Based on new car retail price

This price is subject to change closer to release data

How Does Using a Navigation System Affect an EV’s Driving Range?

Two months after the debut of the all-new 2022 Ranger, Sime Darby Auto Connexion (SDAC) has now unveiled its SUV brother, the Ford Everest, here in Malaysia. The seven-seater SUV will be offered in three variants: 2WD Sport, 4WD Trend, and 4WD Titanium, starting at a price of RM263,888. ...

Following the launch of the all-new in July, local distributor Sime Darby Auto Connexion (SDAC) has now upped the ante with the official introduction of the all-new 7-seater 2022 SUV. First unveiled in March, the 2022 Everest is offered in 3 variants across 2 powertrains at the following prices: ...

Sime Darby Auto Connexion, the authorized distributor of Ford vehicles in Malaysia today announced the introduction of the third generation Ford Everest, an SUV based on the all-new Ford Ranger. Surprisingly, the new Ford Everest is offered in three variations, a 2WD Sport, 4WD Trend and top-of-the-line 4WD Titanium. Unlike ...

Apple CarPlay lets you use your phone hands-free What are the downsides of a wireless Apple CarPlay adapter? What is the difference between Android Auto and Apple CarPlay? Apple CarPlay has become a basic feature in the base trims of several modern vehicles. This smartphone integration program lets you ...


View more: What Are the Downsides of Wireless Apple CarPlay Adapter?

Passport sales are down 25% The Passport was all-new in 2019 The Passport still competes well What trims does the Passport come in? Earlier this month Honda announced the new TrailSport trim for the 2023 Passport. It’s a more rugged version of the Passport, and adds some off-road goodies. ...


View more: Is the Honda Passport Past Its Prime?

What’s going on at Honda? The Ridgeline is holding steady What trims does the Ridgeline come in? Is the Honda Ridgeline reliable? Honda’s sales are down, a lot, in 2022. According to the company’s latest sales figures, it has sold 58,233 vehicles, which sounds like a healthy figure. But ...

Soon You'll Be Able To Reserve A Parking Space In Makati