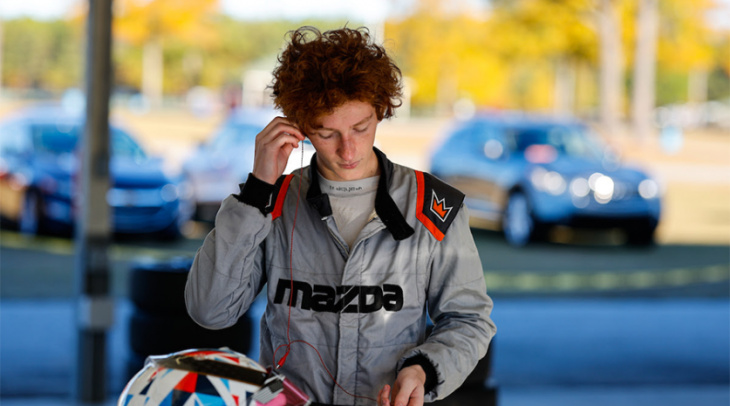 Nate Cicero came away from the 2022 Mazda MX-5 Cup Shootout with the big prize — a scholarship valued at $110,000 to compete in next year’s Idemitsu Mazda MX-5 Cup presented by BFGoodrich Tires.

“It’s pretty insane, I’ve been working for this the entire year,” said Cicero, who participated in the Spec MX-5 Shootout last year. “I am kind of speechless, but so happy that I’m going to be racing in MX-5 Cup next year. I am going to just keep working from here. I felt pretty good about how I did off track, and felt decent about how I was in the car, but I wasn’t sure how it was going to play out. When they called (Thomas as runner up), I was thinking that it was either first, or nothing for me but I was really hopeful. I’m just super happy.” 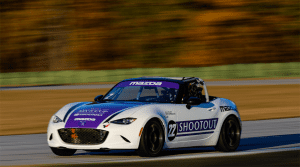 Two $75,000-value scholarships were awarded to runner-up Thomas Annunziata, as well as a second to Heather Hadley.  From the group of karters, Reid Sweeney and Chase Jones have been named as official Mazda drivers in the Spec MX-5 series for 2023.

Operating three identical cars, Flis Performance prepped and maintained the MX-5 Cup vehicles, while Advanced Auto Sports tended to the Spec MX-5 cars. Every driver received their own set of BFGoodrich Tires for the duration of the event.

Following an extensive evaluation from the MX-5 Cup judges, Cicero was determined to be the racer that best embodied Mazda’s ideals and speed.

“I am very proud of all these drivers and the way they’ve risen to the challenge presented to them,” said Mazda Motorsports Program Manager Jonathan Applegate. “It never gets easier to choose a winner, but Nate (Cicero) was poised and professional, and, naturally, very fast. We think he has a great head on his shoulders and is well positioned for a long career in motorsports.”

2024 Mazda CX-90 revealed Is the Mazda CX-90 better than the CX-9? How much does the 2024 Mazda CX-90 cost? Hiroyuki Sanada is a Japanese actor that has starred in films like Bullet Train and The Last Samurai. Sanada is internationally known thanks to his talents and key roles ...