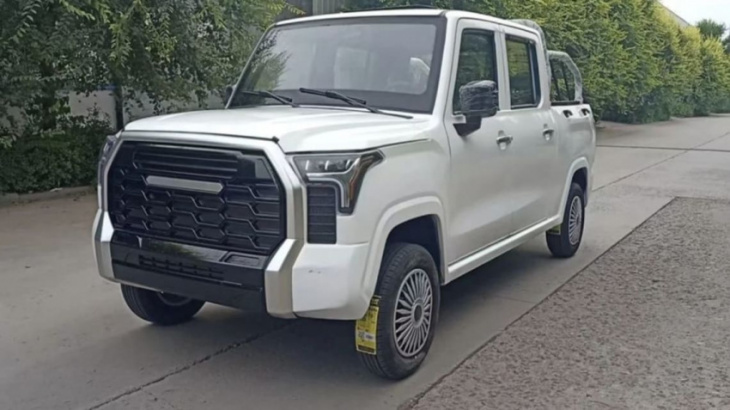 A truck that has borrowed heavily from the Toyota Tundra playbook has surfaced in Japan, with the new SVH Tundar clearly borrowing in both its looks and its name.

According to reports, SVH stands for Sino Vehicle Hub Co, with the company clearly unafraid to return to the dark old days when the best thing you could say about Chinese cars is that some of them looked a bit like cars that were already quite successful elsewhere in the world.

Those days are mostly over, of course, with brands like MG, Haval and Great Wall (and, very soon, BYD and Chery) making inroads in Australia and around the world with quality offerings.

But that memo is yet to reach Sino Vehicle Hub Co, who have created a Tundra-style monstrosity in the Tundar.

For one, the 13-inch wheels look better suited to a shopping trolley than off-road-ready truck, and the 1.0-litre engine under the hood would be swallowed whole by the 3.5-litre twin-turbo petrol V6 with hybrid (286kW/650Nm) fitted to Australian-spec version of the Toyota Tundra.

But perhaps most shameless of all is the fact that, despite being called a Tundar, the vehicle’s tailgate still reads “Tundra”. Not exactly hiding its design inspiration, then.

The price? It’s said to be around US$6,000 (it will certainly have the new Tundra beat on that score). And what’s more, the company has export markets in mind – though there’s no real chance of one coming to Australia anytime soon.

“Mini pickup trucks designed by Sino Vehicle Hub will go on sale this year,” the company says in a Facebook post. “We are finding the potential partners in overseas markets.”